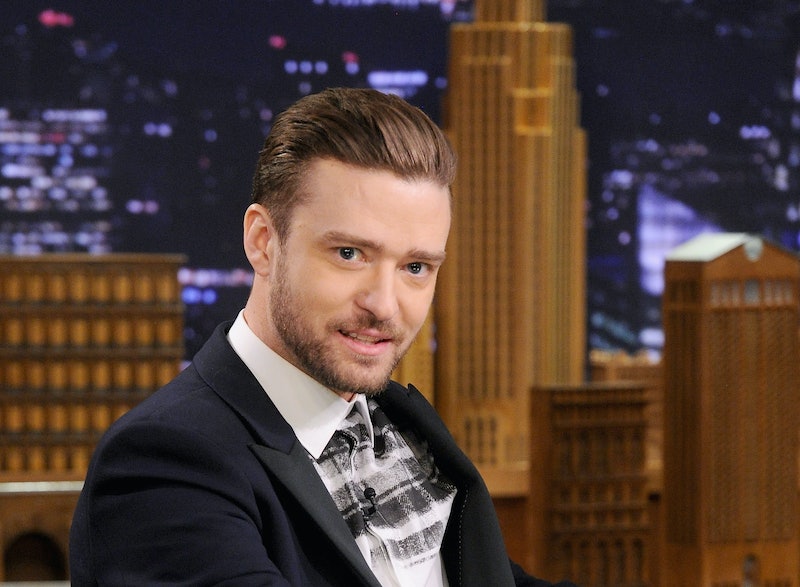 Justin Timberlake has been Charlie Sheen #winning in the news recently. From the poop emoji mask he wore at Taylor Swift's birthday party to calling on Jay Z to perform "Holy Grail" with him during a concert, Justin Timberlake has been full of surprises. Most recently, Timberlake found himself inviting Garth Brooks to perform "Friends in Low Places" during a Nashville concert. And aside from the fact that the duo sang an incredibly energetic version of the song, JT's performance also proved another thing: he is a country boy at heart.

Timberlake, 33 and allegedly expecting his first child with wife Jessica Biel — grr, why can't that be us — was born in Memphis, Tenn., and raised in a small community in the surrounding area, so his country roots aren't too shocking. But when I think Justin Timberlake, I don't think country. I think marionette from "No Strings Attached," I think "The History of Rap" series from Jimmy Fallon, I think ramen noodles hair, or the "It's gonna be May," meme. I especially think, "damn, he looks good in a suit." But not country.

Looking back on his past though, there are definitely hints that JT is a country boy at heart. Here are his best country moments.

When JT was just 11-years-old, he was on Star Search. Look at that hat, and bolo tie, and shirt! Not to mention he is singing "Love's Got a Hold on You," by country star Alan Jackson. Plus, when he doesn't win, look how he goes to shake the winner's hand.

Back in 2012, JT and Biel hung out backstage at a Hank Williams, Jr. concert with the performer, and according to People, one of the things they talked about was turkey hunting. Another thing they mentioned, "Hell, Justin and I even talking about recording a blues song sometime," says Williams. Now that's something that will really connect Timberlake with his roots.

It seems Timberlake has been a fan of Brooks for a long time. Here is a home video of Timberlake singing "Two of a Kind" and winning the local competition. Note his expression when he drops his hat at the end, while he is being crowned winner.

He Wants a Best Country Album

Another thing JT would like to add to his impressive resume? A Best Country Album award. In 2013, Timberlake spoke to SiriusXM's The Highway and mentioned that that's something he still has his eye on. "I still got my eyes set on a Best Country Album. There is time for that," he said while on the radio show.

Here's the video of Timberlake and Brooks singing "Friends in Low Places" this past weekend.