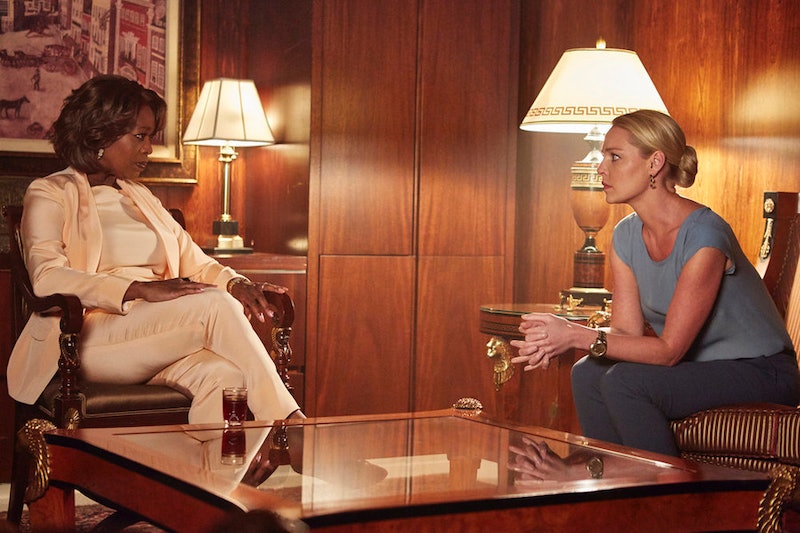 NBC has certainly had its fair share of drama at the hands of Katherine Heigl's State of Affairs (onscreen and off, am I right?), but fingers crossed, it'll be back for a second season (especially since it's part of NBC's super lady-friendly new line-up). Looking a little closer into the future, it'll certainly be back for the second half of its first season (unlike some shows that I know and love — ahem, Selfie). When will State of Affairs be back on NBC, though?

Let's hope it's soon, for the twisty and turny show is all but guaranteed to leave us on a major cliffhanger. Not that I'm complaining — its labyrinthine plots are kind of incomprehensible in the best way possible. The show stars Heigl (who, snarky career-tanking comments aside, I'm actually a big fan of because Grey's Anatomy's Izzie Stevens was one of my favorite characters up there with her 2007-ish contemporaries Betty Suarez and Liz Lemon), and it's one of this year's awesome female-driven political dramas. And besides, it's basically Homeland meets Scandal and everyone knows those are the two best shows on television (I will accept no arguments on that), so what could be better?

State of Affairs has its midseason finale Monday, December 22, which is kind of a welcome change — most of my favorite shows went off the air weeks ago, at the beginning of the month. Does that mean we'll have a shorter wait until the show starts up again? Yes! Drumroll, please: State of Affairs will be returning to TV on January 5 — in other words, in two very short weeks. They'll basically be giving viewers just enough time to get over the flurry of activity that is Christmas and New Years, and plop us back in front of our favorite soapy drama. It's going to have an even shorter hiatus than Brooklyn Nine-Nine (and let's all thank a higher power for the fact that it's not nearly as long as Homeland's behemoth of a nine-monther)!

I, for one, am thankful for the micro-hiatus, because honestly, any show that features President Alfre Woodard ordering her CIA badass renegade extraordinaire Katherine Heigl to sink Russian tankers, is a show that I need back in my life as quickly as is humanly possible.

More like this
Hulu’s Mike Tyson Series Is Unlikely To Return For Season 2
By Brad Witter
We Still Have A Few Unanswered Questions At The End Of 'The Suspect'
By Sophie McEvoy
Paul Mescal, Man Of Mystery
By Samantha Leach and Heather Hazzan
Mike Flanagan Teases 'The Midnight Club' In This Exclusive, Creepy Clip
By Grace Wehniainen
Get Even More From Bustle — Sign Up For The Newsletter