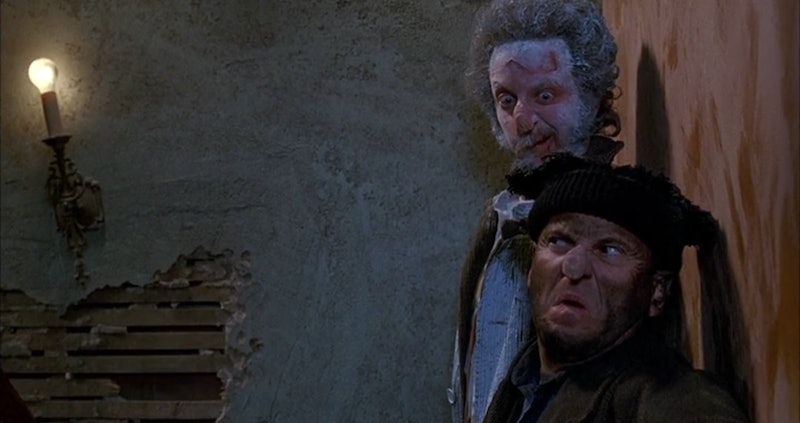 It's officially the week of Christmas. What better time to find out that the Home Alone burglars would have died at Kevin's hands and your favorite mischievous holiday hero would have woken up to juvenile detention? Turns out all the tricks, traps, and household appliances that Kevin from Home Alone used against the Wet Bandit burglars would have given them a good month in the emergency room, if not a fate even more dire.

Back in 2012, a doctor from Weill Cornell Medical College named Ryan St. Clair analyzed the various debaucheries that went down in Home Alone, as well as what the medical ramifications, complications, and overall carnage would have amounted to. The results have been re-reported by ScienceAlert this year and in short, we're not drawn a particularly pretty picture.

A Shot From A BB Gun Through The Dog Door

Let's start with an iconic scene: Kevin hunkers down in front of the dog door just waiting for the gangly burglar's smarmy little face to pop through, BB gun in hand. Kev shoots gangle-puss in the head from about a foot (if that) away.

According to St. Clair, though it looked seriously brutal, the shot was entirely survivable; it would have broken skin but not pierced the skull, meaning an awful headache at worst.

Ouchhh. I've always wondered how they didn't end up utterly conked out after that scene. Turns out they probably would have been in reality.

"That [hit] is easily enough to fracture multiple facial bones, and is probably going to knock you out cold," said St. Clair. "Also, I wouldn't expect either of the Wet Bandits to walk away from this with all of their teeth."

A Blast From A Blowtorch To The Skull

Perhaps the most painful injury to watch, as well as the most serious. In real life, our expert claims that it's likely poor old Harry would need a full skull transplant. Yeesh.

So, every hilariously dark injury combined, what was the doctor's final say?

"Seriously? At this point, Marv and Harry have both suffered potentially crippling hand and foot injuries. Harry has proved to be nearly impervious to burns, and both managed to retain consciousness after taking a flying paint can straight to the face...This movie was way more believable when I was 8."

See the original story at The Week.

More like this
26 Ghost Story Podcasts To Get You Ready For Halloween
By Jessica Booth, Mia Mercado, JR Thorpe and Emma Carey
15 Easy Pranks To Play This Halloween
By Emily Kelley and Lauren Grant
These 25 International Horror Movies On Netflix Prove Fear Is A Universal Language
By Bustle Editors
What Reporting On The UK’s Most Prolific Cyber Stalker Taught Me
By Sirin Kale
Get Even More From Bustle — Sign Up For The Newsletter