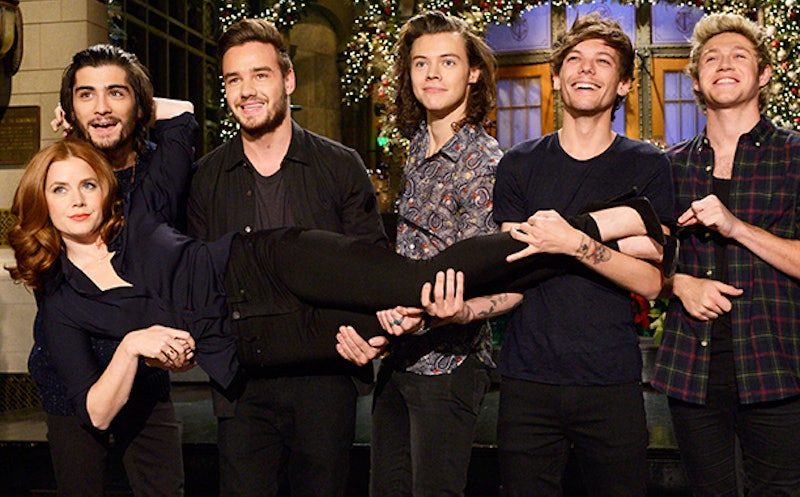 There were a lot of great skits that took place during Amy Adams' return as host to Saturday Night Live . There were Kristen Wiig sightings, a spot-on Serial parody, and even the appearance musical of a certain boy band (you may have heard of them) called One Direction. Suffice to say, I think we all can agree it was a pretty spectacular night of television. But little did we know how much more spectacular it could've been. You see, due to limited time constraints, some SNL skits are forced to be cut. And while that is completely understandable (though personally I could watch these improv scenes for hours on end), there was one recent SNL spoof regarding Love Actually that is just too good to miss. In fact, I found myself laughing so hard I can not believe it was cut from the show.

However, thanks to the power of YouTube, fans are now able to see this glorious skit in action, which mocks one of the best moments in the rom-com film: the cue card scene between Andrew Lincoln and Keira Knightley's characters. Filling in for Knightley's role, Adams watches as her card-carrying suitor (played by Pete Davidson) professes his love for her and hot dogs in the weirdest (aka best) way ever. But hey, you don't just have to take my word for it.

See what I mean? It's downright hilarious. There were significant nods to the original scene (Adams was even wearing a sweater that looked exactly like Knightley's) and yet it still managed to really make the spoof it's own. So much so that I would totally watch an entire film centered around this rather kooky storyline. Which makes me wonder… why exactly did this fantastic moment get robbed from us?

As a dedicated SNL watcher, I know that certain skits get cut during rehearsal if it tends to fall flat with the audience. However, I have a hard time believing that to be the case for this particular parody. I mean, how could you not find this amusing?

That's just great writing, right there. So, as I mentioned earlier, it must've just simply been a timing issue in that it didn't fit in well with all the other sketches. And while I totally understand that stuff like this has to happen, it makes me sad to think of all the other great scenes we've missed out on because of a similar issue. Sure, we can still see it now after the fact, but I like my SNL skits like I like my coffee — by the bucket full.

So I say we extend the SNL time frame so that they can include all the things all the time. Because, to me, this skit is perfect.

And just for fun, here's the original:

Now if you'll excuse me, I have to go watch Love Actually now on Netflix while I still can. BRB.