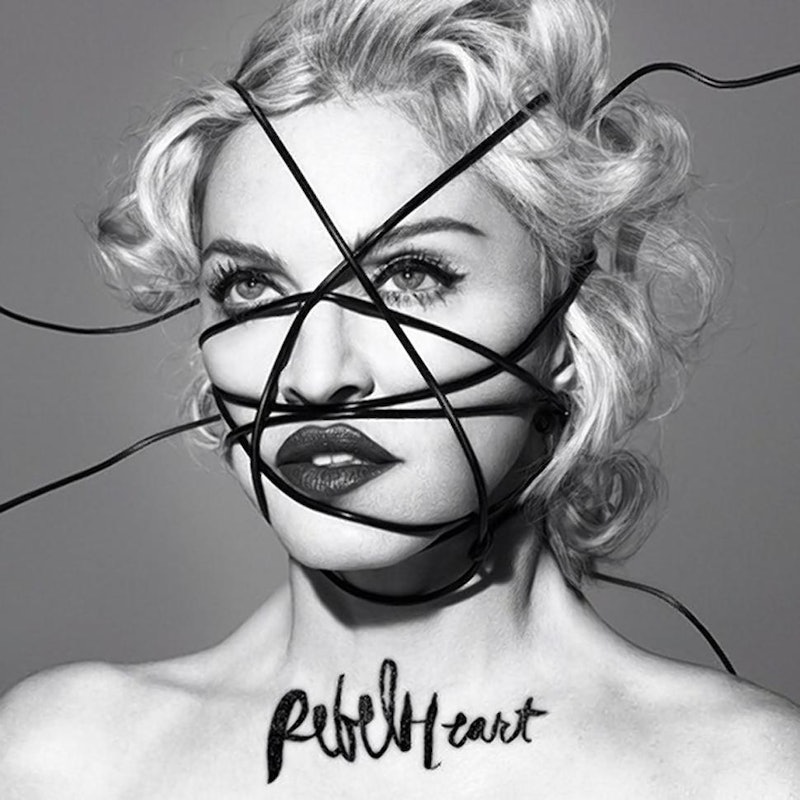 I don't know that anyone saw this coming: on Friday, Madonna unexpectedly debuted her new single, "Living For Love." Whoa. The uplifting dance anthem is probably the pop music icon's best single since 2005's "Hung Up." That's awesome! But wait — wasn't her new single not supposed to drop until 2015? Well, according to the Queen of Pop's new interview with Billboard, that was the original plan, but after over 10 demo versions of songs from her upcoming 13th LP leaked online recently, she decided that she had to take action. So, on Friday evening, Madonna put her new album, Rebel Heart , up for pre-order on iTunes. Six songs are available for purchase right now, with more set to premiere as we approach the 57th Annual Grammy Awards ceremony on Feb. 8. The entire set will be out on March 10. Of the songs we've heard so far, "Living For Love" is definitely my favorite (though "Bitch I'm Madonna," which features rapper Nicki Minaj, is pretty great, too).

Produced by Diplo, "Living For Love" is a thumping '90s house–influenced track that will make you want to drop whatever it is that your doing at the moment and DANCE! And sing! And follow your dreams! It's wonderful. Unlike many of the vocal performances heard on her last album, MDNA, Madonna sounds totally present and engaged on "Living For Love." She's not just along for the ride this time around, no. Instead, you actually get the sense that this song and its inspiring message are really important to her. On the first verse and pre-chorus, Madonna sings:

First you loved me and I let you in

You empowered me, you made me strong

Built me up and I could no wrong

I let down my guard, I fell into your arms

Forgot who I was, I didn't hear the alarms

Now I'm down on my knees

Alone in the dark

I was bound to your game

You fired a shot in my heart

Took me to heaven, let me fall down

Now that it's over, I'm gonna carry on

Lifted me up and watched me stumble

After the heartache, I'm gonna carry on

The chorus, of course, will knock you flat on your butt with all of its supreme Madonna awesomeness:

I'm not giving up

Love's gonna lift me up

"It's kind of like the old me and the new me all mixed in together," Madonna said of "Living For Love" while talking to Billboard over the weekend. She's absolutely right. What's more, Madonna finally sounds like she's back to making the music that she truly wants to make. What a relief. Here's to hoping that "Living For Love" becomes a big hit!

More like this
Twitter Is Freaking Out Over Rihanna’s 2023 Super Bowl Halftime Show Announcement
By Stephanie Topacio Long
Even If She Tried, Beth Ditto Couldn’t Stay Away From Music
By Ivana Rihter
Everything To Know About Taylor Swift’s 10th Studio Album, 'Midnights'
By Grace Wehniainen and Jake Viswanath
What Demi Lovato Really Thinks About Child Stardom, Depression, & Sobriety
By Radhika Menon
Get Even More From Bustle — Sign Up For The Newsletter