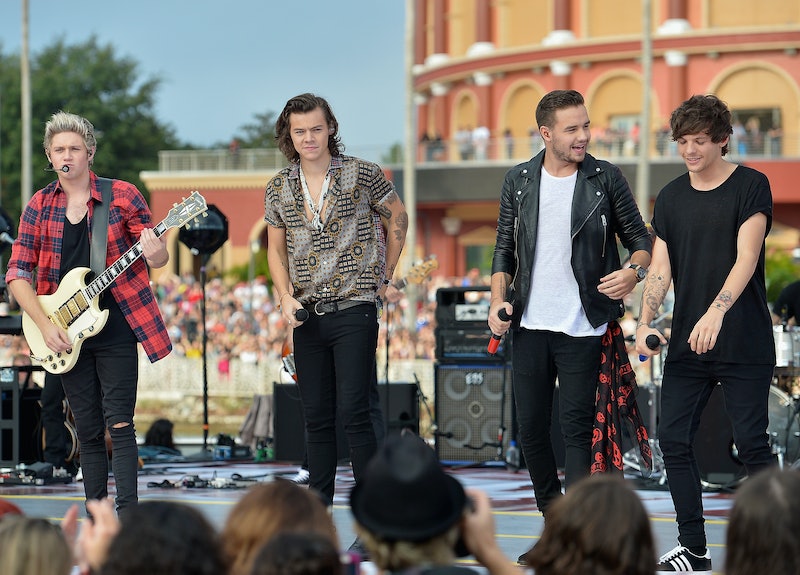 What better way to celebrate the holidays than with a One Direction TV special, am I right? What could be more festive and heartwarming than an exclusive concert, never-before-seen footage, and special performances from the boys' new album FOUR? But, if you're expecting Harry Styles and the gang to be running around in Orlando singing Christmas songs for a couple of hours, think again. As wonderful as NBC's One Direction: The TV Special will be, one thing is for sure: it is not going to be holiday-themed. I know, I know; I was a little sad too.

Given that the TV special premieres on December 23, just one day before Christmas Eve, the knowledge that Zayn Malik, Liam Payne, Harry Styles, Louis Tomlinson and Niall Horan won't be dancing around the stage in Santa hats might disappoint a few of you. But don't worry too much, because the special is still going to be pretty magical. Just how magical, you ask? Well, you'll have to tune in on Dec. 23 at 8 p.m to judge for yourself. However, as you're watching, you're bound to have a few questions about the whole event, questions that the TV special itself just won't be able to answer for you. That's where I come in. I attended the filming of the show, and made sure to keep an eye out for details that die-hard fans are going to want to know.

Here are 11 questions you might have about the One Direction NBC TV special, answered.

1. What IS This Whole Thing? How Did It Happen?

One Direction: The TV Special includes a variety of things that go beyond just the private concert at Universal Studios, which is what I attended. The concert itself was limited to about 3,000 guests (although it felt like much less), 300 of whom had won a contest that flew them to Orlando, gave them tickets to the concert and gave them access to a variety of other 1D surprises — just wait, you'll see. Some people at the show were press (like lucky me), and an equally small number of other fans in the crowd had bought tickets that One Direction sold through their website. Which brings me to the next question you might be asking...

2. Why Couldn't I Get Tickets To This?

According to fans in the crowd, the tickets that 1D did put up for sale on their website were very, very limited. Most people who got them said they felt unbelievably lucky. As the show was limited to standing room only, it was easy for a lot of people to get closer to the stage and the boys than possible at one of their arena tours.

3. Wait, Why No Christmas Songs?

I know, I know. It's Christmastime, so where are all the holiday songs? Do we all secretly hope for a 1D version of "Baby, It's Cold Outside" to appear suddenly at some point? (Um, yes — or maybe that's just me.) But the TV special was specifically about One Direction, their biggest fans, and, most importantly, their new album, Four, which had been released just days before the filming of the show.

4. Where Was Zayn the Day Before?

If you're a big 1D fan, then you've probably already heard about this, but the day before this concert filming was One Direction's Today Show performance — you know, the performance where Zayn Malik was nowhere to be found. This caused a whirlwind of rumors to float around the Internet (because this is 1D, and that is just what people do), but, from what I can tell, the poor guy was just sick. He flew in for the TV special concert filming soon after. Although, to be honest, he didn't look completely well at the private concert, either. But we'll get to that later.

5. Why Does Everyone Look SO Cold? This Is In Florida, Right?

Yes, the TV special was filmed in Orlando, Florida. But, for most of the filming, it was roughly 40 degrees outside. On my drive home, the temperature dropped to 37 degrees. Although the people in the crowd were from all over the world, a lot of the audience was made up of Floridians and no one was expecting it to be in the 40s in mid-November in Florida. No one. You can spot me in the crowd wearing a black beanie, giant scarf and constant look that says, "Oh my gosh, I am so happy right now, but I've also lost all feeling in my feet." The boys, however, wore barely anything and seemed to be fine the entire time. Poor Louis did seem a little chilly at times though.

6. What The Heck Is On The Back Of Liam's Jeans?

Maybe I was the only one confused by this, but I COULD not figure it out for the longest time. Once I concluded that a scarf was in the back of his pants, another question entered my mind: HOW is it staying in place as he runs around the stage? It was tied to his belt loop. I know. Magic.

7. Were Liam's Parents Really There?

Yes! They were. He said hi to them during the filming at one point. Once word spread of where they were standing, many fans went up to his parents during the show and requested photos with them, to which they kindly obliged. It was all very sweet.

8. Did The Boys Start Singing Frozen's "Let It Go" At One Point?

Oh, yes. It happened. Well, for a few seconds anyway. In between filming songs and commercial transition bits, the boys were being their fun selves and Niall, Harry and Liam (OK, mostly Harry) broke into song. Because why not? It's a catchy song, guys. We've all done it. Harry's rendition of the famous, "the cold never bothered me anyway" line is pretty epic. You can find the clip on YouTube if you're very curious. It's blurry, filled with mostly just screaming girls, but has 35,000 views anyway. No one is surprised.

9. Wait, Are They ALL Wearing The Same Jeans?

Again, could just be me, but I asked myself this question more than once. Because, honestly, ALL of the jeans looked the same. Ripped, black, tight, most likely smaller sizes than my own jeans... you know, I was just wondering. No concrete answer to give you for this question, but come on — I couldn't be the only one thinking this.

If you're wondering why Zayn might look just a little down throughout the show, it might be because he kind of did look a little sad during the whole filming. Granted, he also looked really good, but that's beside the point. He was the most subdued out of the five, and definitely the most quiet. But let's give the guy a break, he was apparently sick, had just come in on a flight from London and was wearing nothing but a mere cardigan and T-shirt in freezing temperatures. Having said that, his hair? Pretty fab.

11. What Else Did I Miss By Not Being There?

If for some reason the TV special makes you feel more jealous that you weren't there rather than all warm and fuzzy inside because it's just so darn wonderful to watch, then I'm here to fill you in on the things that you did miss. First of all, what is with people throwing things at the boys while they're on stage? Not just teddy bears or notes were thrown throughout the filming (that's kind of cute), but also half-chewed pretzels, Skittles, and everything in between hit the guys more than once. Does it get a rise out of them? Well, sometimes. But how would you like to be hit with partially eaten food while you're performing a private concert for your biggest fans in the freezing cold? Exactly.

Other than that, what you see in the TV special is pretty much exactly what happened at the concert — but with more new footage that myself and fellow concert-goers are just as excited to see for the first time as you are. It was a wonderful experience to see such talented performers and such dedicated fans. OK, it was really cold. But no one cared at the time. The music was great, the concert was fun, and the boys were kind — always thanking us for sticking through the freezing, four-hour filming. And that's pretty wonderful.

More like this
Olivia Wilde & Harry Styles' Relationship Timeline Started With 'Don’t Worry Darling'
By Jake Viswanath
Twitter Is Freaking Out Over Rihanna’s 2023 Super Bowl Halftime Show Announcement
By Stephanie Topacio Long
Everything To Know About Taylor Swift’s 10th Studio Album, 'Midnights'
By Grace Wehniainen and Jake Viswanath
Dermatologists Answer Your Most Burning Botox Questions
By Brittany Leitner
Get Even More From Bustle — Sign Up For The Newsletter