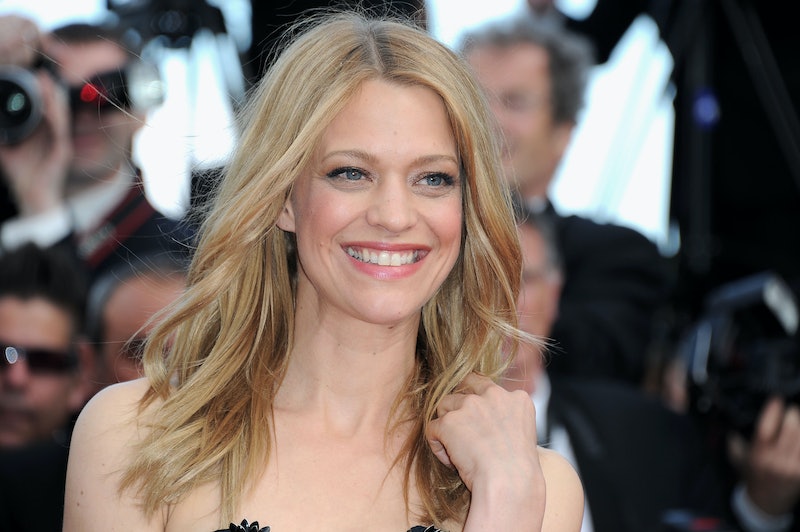 It's been well over a decade since Love Actually first appeared on the silver screen and even now it's still considered to be a must-see over the holiday season. And while many of the film's beloved characters have continued to grace us with their presence (looking at you Liam Neeson and Emma Thompson), others have sort of fallen off the map to the point where I have no idea what's become of them and their wonderfully British selves. And one of those people includes Heike Makatsch, who played Alan Rickman's flirty assistant Mia in Love Actually — though odds are you probably wouldn't even recognize her without that wig of hers. I know I sure didn't.

Seriously, it's like two completely different people and I honestly don't think I could've even singled her out in a line up. (Not sure in what scenario I would be perusing a prison line up, but just go with me on this one.) I guess it just proves once and for all how much a wig can truly make all the difference. I mean, why did they even decide to have her wear a wig in the first place? Perhaps to set her juxtaposed to Thompson's blonde hair, thus creating a sort of yin and yang type of effect? Like good vs. evil? She did wear a devil costume to an office Christmas party after all…

But regardless of the why, the result still remains the same. I apparently had no idea what this woman looked like in real life and now my mind is officially blown. Which got me thinking how much fun it would be to look back at some of my own personal favorite wig transformations throughout the years. You're welcome.

Aside from this being one of my favorite childhood movies of all time, Bowie's portrayal of Jareth the Goblin King was made even better by that magical wig he was sporting. Never forget.

Johnny Depp in Pirates of the Caribbean

Now I love me some Captain Jack Sparrow goodness, but if you were to tell me I'd be attracted to Johnny Depp in dreads before this film franchise I probably wouldn't have believed you. But somehow this devilishly handsome pirate makes the look work. More please!

Emilia Clarke in Game of Thrones

Truth be told, Daenerys Targaryen could make any look work, but I just remember thinking the actress herself was unrecognizable when I saw her rocking brunette (and not bleach blonde) locks on the red carpet a few years back. Of course, I knew logically that her GoT hair had to be a wig, but it still managed to throw me off regardless. #Khaleesi4ever

Viola Davis in How To Get Away With Murder

We all have our usual nighttime routines, but it was a truly magnificent moment when Davis' Annalise Keating bared all in the best way possible by removing her wig and showing off her hair in all its natural glory. It was a powerful moment and one that made me fall in love with this actress even more so than before, if that's even possible.