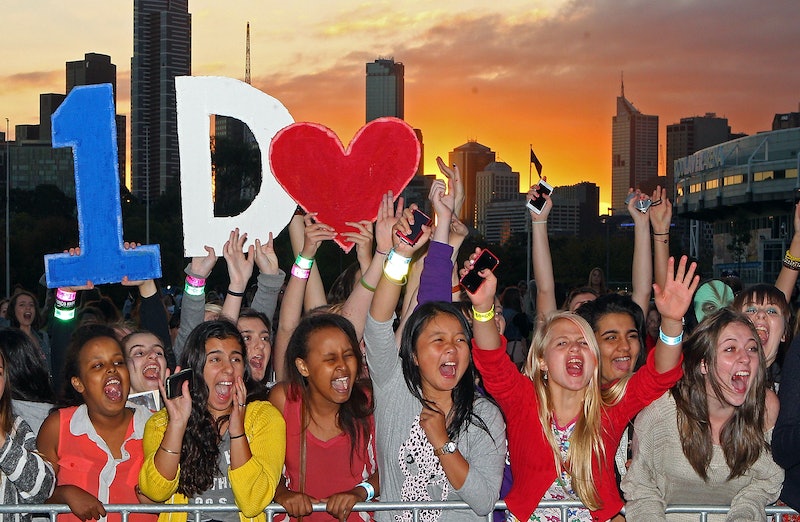 In high school, I was the cool kid (only I thought I was cool, granted) who decided to drive to concerts on the weekends as soon as I got my license. In middle school, I did not simply like bands casually; I was obsessed. I checked message boards, I stalked concert listings, I complained about how all the good musicians, "like, just never come to Florida, ugh." Earlier than that, I was ripping out pictures of my favorite members of boy bands from my older cousin's CD booklets (you'll always be my number one, Nick Carter). I have always had a thing for music — and the whole teenage obsession with musicians, concerts, boy bands or otherwise, I get it. 100 percent. But I've mellowed out a bit now.

As an older and not yet wiser 21-year-old, I still love music and concerts. I still get giddy when I hear a favorite musician sing a favorite song. I still understand the power of a cute guy and a good voice. But now I'm perfectly happy with my own cute, non-musician boyfriend and don't spend my time Googling pictures of Teddy Geiger. So, when the chance to attend a private One Direction concert being filmed for their NBC TV special on behalf of Bustle presented itself, even though I wasn't really a fan, I said hey, why not? I can appreciate a boy band as much as the next girl.

So, I made the drive to Orlando, excited that I would soon be breathing the same air as someone who has dated Taylor Swift. I got to the concert venue and tried to remain professional while internally doing giddy cartwheels. I needed to observe what was going on for my future article, but I also wanted to record the details of the show and fully appreciate the experience. I made my way toward the open spot nearest to the stage, and stood for four hours while girls pushed angrily past me toward the stage. But here's the thing — all those girls around me? I wasn't one of them.

For four hours during the filming, I glanced to my left and right, thinking to myself, "Oh my gosh, do they KNOW I'm not one of them?" Oh, I did my best to pretend. I danced. I sang. I waved my hands back and forth with the best of them. But here's what I was really thinking throughout the experience.

As you can imagine for a boy band that typically sells out arenas, a private concert with standing room only is bound to get a little pushy. Everyone wants to be just a little bit closer to the boys. And some girls? Well, they really didn't care what it takes to get to the front. There was pushing, there was shoving, there were muttered insults. One girl made a smaller girl who was using a wheelchair move to another part of the concert because, "she was afraid she was going to trip on the wheelchair and hurt the little girl." Mhm, suuuuure. She later called security, and the wheelchair was moved.

Another girl begged an elderly woman to allow her to move in front of her during the show. She made her case by explaining her love for the band, almost as if to say, "Hey, oldie, this concert is clearly more important to me than it is to you." The woman let her move up. I was impressed.

Maybe it was just the girls directly around me, but my gosh — something about a 1D concert just makes 15-year-olds curse like sailors. At one point, prior to filming, the coordinator of the show asked the audience to stay quiet. The girl next to me promptly yelled, "WHY ARE THEY MAKING US STAY QUIET? THEY CAN SUCK MY ASS." What does that even mean? I still don't know. But it happened.

3. "What happens if they notice I get the lyrics wrong?"

I know the same One Direction songs that everyone knows. But the band's new album had come out just a few days prior to the show, so some of the songs... well, I didn't know every single world, OK? And having been a die-hard concert attendee/fan for bands in the past, I know the "side-eye, death glare, 'oh my God, she doesn't even know the words'" look that goes out to the less dedicated fans at a concert. And this was a One Direction concert. What would happen if one of them realized I wasn't one of them? I thought for sure I would be carried out and burned at some sort of stake immediately. Well, you know, after the show.

If you're not familiar with One Direction, then you probably know of Harry Styles anyway. Unofficial frontman of the band, Taylor Swift's ex-boyfriend, and all-around good-looking guy, Styles enjoys a level of celebrity status that goes beyond that of his bandmates. If you ARE a fan of 1D, then you know that Styles is unique. It's hard to explain really; he's just Harry Styles. I've learned this now, but at the time of the concert, I had no idea.

So as I watched Styes throughout the show, I was amused and intrigued by his strange little mannerisms, quirky jokes and general disposition. He would interact with the crowd, or make jokes about people throwing half-chewed pretzels at him (yes, people did that), or break into song (yes, he sang "Let it Go" from Frozen at one point). The only constant? He was always in his own little world. But, in a weird way, it was kind of charming.

Throughout the show, I had the thought to ask those around me questions about the boys of the band. But a thought occurred to me just as I was about to lean over to the girl next to me: "Oh my gosh, what if I get their names wrong?" There's five of them, you know? And, OK, I know Styles and Zayn Malik with his weird headband thing, but what about the rest? What if I messed up? I thought I knew their names, but suddenly I couldn't be sure. Looking around in fear, I realized that anything I said could reveal my true journalist/press/not-die-hard-fan status to those around me. And, if that happened, I couldn't be sure I would make it out of the crowd alive. So, I stayed quiet.

I'll be honest; I've made fun of One Direction fans. Not in a cruel, "wow, my taste in music is so much better than yours" kind of way, but I have certainly laughed at the hysteria of it all. But, guys, the members of One Direction can sing really well. Admit it: somewhere along the way, we music snobs have started to associate boy bands and hysteria with auto tune and a lack of raw talent. Since this was filmed for TV, some of the songs had to be preformed two or three times to get the right take. As you can imagine, this was a little difficult in the 40 degree weather. But again and again, the guys belted out the same songs beautifully — and each time I realized that not only are these guys talented, but they're individually talented. They're totally different from one another. They're four completely different individuals who can all sing really, really well. And that's more interesting than I ever would have thought.