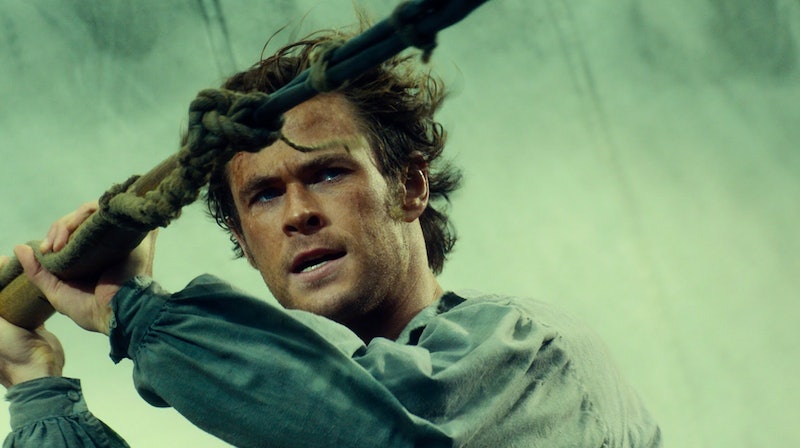 It makes sense to stick Thor star Chris Hemsworth on a boat in 19th Century garb. It just feels right, somehow — something about those flowing shirts. Too bad there's a giant demon whale after Hemsworth and everyone else on his boat in The Heart Of the Sea . If the second trailer — or the true story it's based on — is any indication this whale is not any kind of mellow.

One of my first fears came out of that scene in Pinnochio where Geppetto and Pinnochio are eaten by a whale, so there's a part of me that wonders if seeing this movie is a good idea in my new, mature, whale-accepting mentality. But this does seem the kind of movie Hemsworth fans might enjoy, if only because it fits pretty seamlessly into the fact that his career so far seems to mainly be a tour of vaguely different modes of macho masculinity. From Thor, to Rush, to the scene in this trailer where someone points a gun at his face and dares him to say he's afraid and he's all "AM NOT."

Seems kinda like he should be afraid, though, considering [spoiler alert] things don't exactly go well for anyone on that boat, and "tragedy" is literally in its source material's subtitle. Things get a little, shall we say, Lord Of the Flies.

More like this
Lego Just Announced Its 'Black Panther' Set Release Date
By Maxine Harrison
Margot Robbie Breaks Her Silence On *That* Viral 'Barbie' Moment
By Maxine Harrison
Nicola Coughlan Shared A Lady Whistledown Excerpt From ‘Bridgerton’ Season 3
By Grace Wehniainen, Alyssa Lapid and Sam Ramsden
Everything To Know About 'The Last Of Us' TV Adaptation
By Sophie McEvoy and Radhika Menon
Get Even More From Bustle — Sign Up For The Newsletter