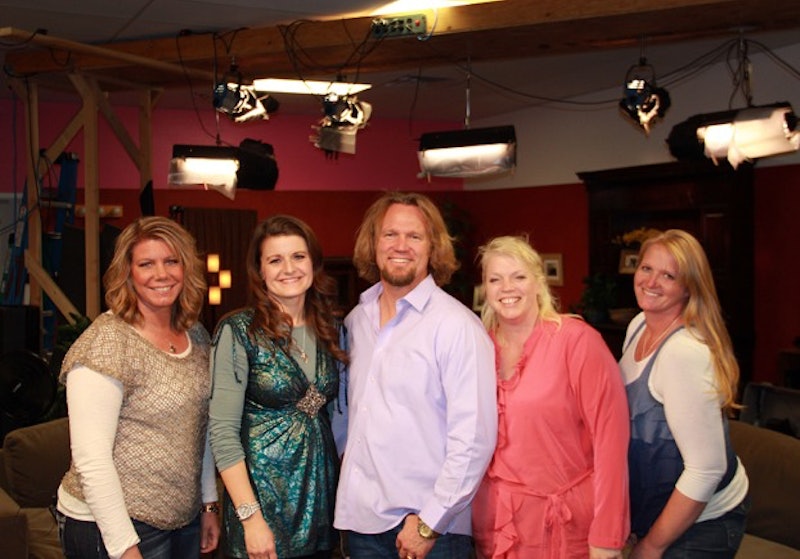 Honestly, when it comes to Sister Wives, I'm a little miffed. That midseason finale back in July didn't give us any useful information — something I normally wouldn't be mad about, except for the fact that TLC framed it as a "tell all." I need to know if Robyn is pregnant, guys. This is something that has been weighing on my mind for months. Fortunately, the wait is almost over. Just as my other favorite polygamy family from My Five Wives is going on hiatus, Sister Wives is returning for Season 5B. Starting Jan. 4, 2015, the Browns are officially back in business, beginning with a two-hour midseason premiere. But it's been five months since the last time we caught up with their family. What have they been up to since then?

Fortunately, there's always Twitter and Instagram to keep us up to speed, and it definitely seems like the Browns have been busy. They had an unimaginably huge Thanksgiving, according to the photos on the Sister Wives Facebook page, and it looks like Robyn invited some of her family members in addition to the many people who are already in their immediate family. They're brave to make dinner for that many people — I complain about making dinner for myself.

Oh, and My Sisterwife's Closet? That's still totally a thing. They were recently hanging at a gun show, selling their stuff — and they've expanded their products in a big way. They're now offering clothing and natural bath products among other things. Hopefully, this is bringing them better sales than they experienced earlier in the show, because the last we heard, the business wasn't doing too hot.

The Browns also had a new family portrait done, and it turned out kind of adorable.

And even more recently? Mariah and Meri are, apparently, in Disney World at this very second, and I am eternally jealous.

In conclusion: If I could somehow have Kody removed from the family, I would totally be a Brown. Case closed.