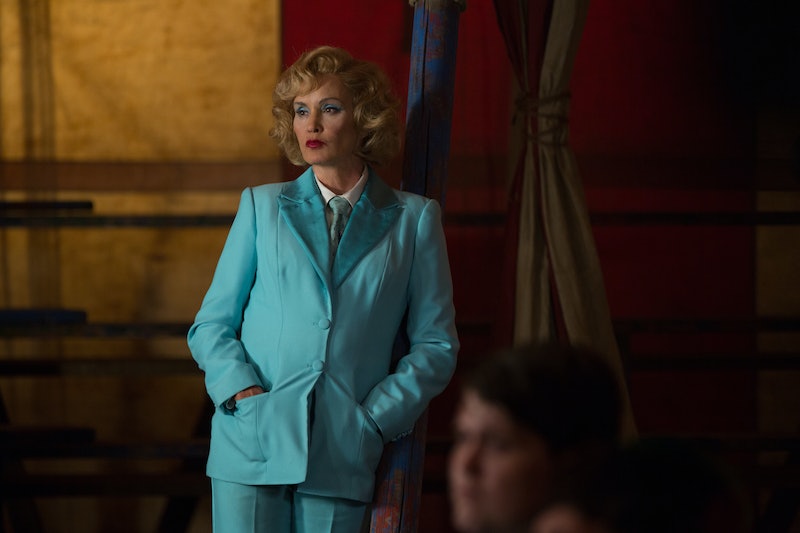 Elsa Mars is getting ready to skedaddle from her Jupiter home as FX's American Horror Story comes to an end and it looks like the freak show might not make it without her. Freak Show went off its regular path for a moment when it flashed forward to AHS fan-favorite Pepper's future in the asylum and we got a glimpse of the German social-climber on the cover of a magazine. So sometime between Pepper's abandonment and her admittance to the asylum, Elsa fulfilled her dream of becoming a Hollywood TV star after all. The question is how in the world did she pull that off?

FX released a press release for the horror-drama series' eleventh episode "Magical Thinking," which stated that the show's sketchy protagonist will be making further preparations for her move to Hollywood. But Stanley is not the talent scout he claims he is and he certainly doesn't have the means to get her there, so how does Elsa make it to the cover of LIFE Magazine?

Some distinctly weird things have already happened on Freak Show, including the supernatural, so any one of these scenarios could still occur:

The Freak Show Gets its Very Own Hollywood TV Series

Hey, a TV program about a freak show is a massive hit in 2014, so why not in 1962? If Jimmy's trial and/or escape from prison becomes as newsworthy as the murders he was convicted for, the freak show is about to get a whole lot of attention. People flocked to Jupiter when they found out Jimmy was a hero, so you can only imagine how much the escape will affect his popularity. If Elsa is about to make it big in Hollywood, why not bring the survivors along?

Elsa Uses Stanley's Blood Money to Make it to Hollywood

Maggie and Desiree are on a new mission to take Stanley down and Dell and Elsa both know about his villainous ways. Maggie said Stanley made some big bucks with Ma Petite's body and now he's got two new heads and potentially Jimmy's hands to add to his income. Once Elsa finds out Stanley's a fraud and that he's pawning off body parts from her precious family, it's possible she'll simply take the money and run.

This scenario is extremely unlikely, but weirder things have happened on AHS. So many of the freaks are dying so quickly and Desiree knows Maggie and Stanley are likely behind it all. It's doubtful that Stanley will manage to get away with his treachery if the freaks have anything to do with it. However, Elsa obviously gets to Hollywood somehow and if it's not with Stanley, she only has a few more episodes to figure out how.

The freaks are dropping like flies and it doesn't seem to be stopping anytime soon — especially if Stanley persists with his blood-thirsty ways. The show cannot go on without its ringmaster, but Elsa can't stay in Jupiter without a cast of performers to earn her a little fame. Between Ethel and Pepper's back stories, Elsa finally showed us that she has a soft side when it comes to her freaks. We know after four seasons that no one is ever safe on AHS, and if FX kills off all the freaks, Elsa's sadness might inspire an acting career.

More like this
You’ll Definitely Recognise 'Inside Man's Louis Moffat
By Sophie McEvoy
24 Years Ago, 'Friends' Dropped Its Most Underrated Ross & Rachel Episode
By Grace Wehniainen
If 'Entergalactic' Season 2 Happens, You Could Get A New Kid Cudi Album
By Kadin Burnett
Jeffrey Dahmer’s Arresting Officer John Balcerzak Got His Job Back After Being Fired
By Grace Wehniainen
Get Even More From Bustle — Sign Up For The Newsletter