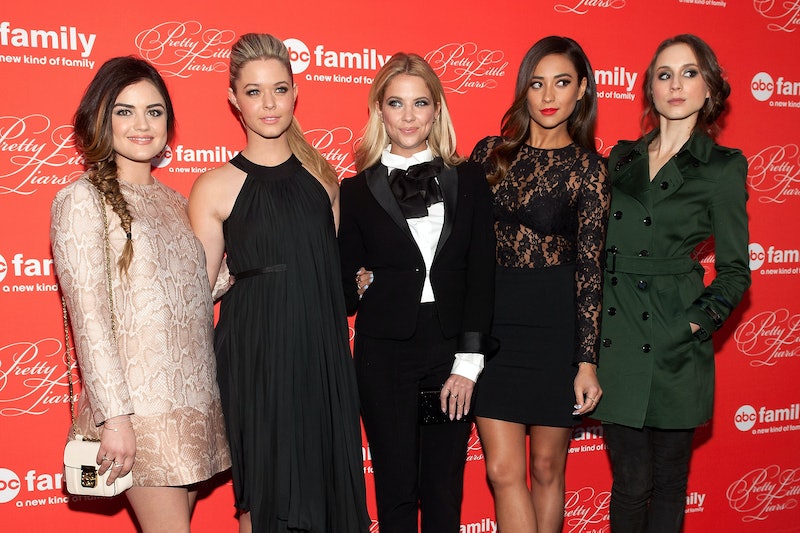 Starting to miss ‘A’ yet, bitches? The much-anticipated Pretty Little Liars Christmas Special only made the agony of waiting for the January premiere that much worse. Fans went nuts over whether "How the ‘A’ Stole Christmas" would answer any of their burning questions, but it only opened up more suspicions. Poor Mona was finally finding some friends amongst the liars (now that they’ve teamed up against Alison), but unfortunately it didn’t last long. Her death in the Season 5A finale left us hanging with so many mysteries left to be solved and the Christmas Special didn't do much to help. Now, Mona supposedly has some Pretty Little answers.

Still, because ABC Family just loves to be cruel, the drama-thriller series doesn’t actually return until Jan. 8, so we’ll have to wait until 2015 for any real answers. Mona briefly returned for the Holiday Special as the Ghost of Christmas Past, Present and Future, but the episode was really nothing more than a teaser. Ali had some flashbacks that may or may not effect the future of the show and she found a look-a-like who could have been the blonde in Mona's house. But the PLL Holiday Special didn't exactly answer any of the major questions that we already had, so if ABC Family would do us a solid and tie up at least one of these loose ends, I’d be a very happy camper.

What Was Mona’s Proof that Ali is 'A'?

Ali was definitely outside of Mona’s house when her death was announced, but that doesn't mean she was inside. Ali has a new posse and one of them is an extremely similar-looking blonde who is clearly convinced of Ali's innocence and willing to risk everything to help her. Ali didn’t necessarily kill Mona, but it can't be a coincidence that Mona found supposed proof that Ali is ‘A’ and then was suddenly murdered. She found out something ‘A’ didn’t want her to find out and it cost Mona her life.

What Else Does Spencer’s Dad Know? Was He the One to Bail Her Out?

We know Melissa was the one who really killed Bethany Young and that Peter Hastings is aware of it — but would they dare use Melissa’s confession to save Spencer? Spencer is currently out on bail, so someone had to have come forward for her — most likely her lawyer mother or potentially Peter. But we also just found out that Ali knew Bethany and knew about her mother’s affair with Bethany’s father. Something tells me there’s more to the story of Bethany’s murder and Spencer’s dad might be the key to that info.

If the detectors didn’t catch Ali’s lies, that means she actually believes in what she’s saying — so she should be the one locked up at Radley. Pathological liars like Alison eventually get so good at lying that they actually believe what they’re saying is the truth. If Ali is a sociopath like Mona thinks she is and Ali no longer has her best friends around to manipulate, the golden girl will spin out of control. On the other hand, I have to believe it was some other crazy blonde who killed Mona. Ali being the murderer would just be way too simple and simple is NOT in PLL’s vocabulary book.

Ali has a brand new posse and, evidently, they are terrified of her. Meanwhile, the biggest Christmas twist was that Ali might actually be dating Holbrook, which could cause some major trouble. She might not turn out to be ‘A,’ but Ali must have some idea of who is. It’s about time we found out the truth.