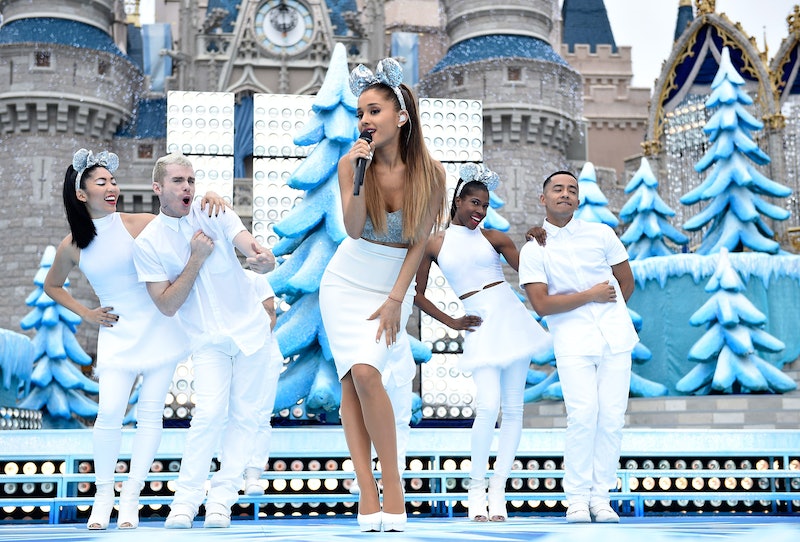 When it comes to music, some might call 2014 the Year of Beyonce. Others may say it's the Year of Taylor Swift. But I'll always remember 2014 as the Year of Ariana Grande and her famous ponytail. The former Nickelodeon star — anyone else remember her from Victorious? — truly came into her own this year after her 2013 hit tune "The Way" showed us she truly had some Mariah Carey-quality pipes. Then what better way to celebrate Christmas than to watch Grande belt 'em out on the Disney Parks Christmas Day Parade , airing Thursday morning on ABC. Because the 21-year-old pop star totally hits it out of the park.

Sporting sparkly Mickey ears, Grande sang some classic and new Christmas tracks — including her new holiday tune "Santa Tell Me" — while wearing a silver lace crop top and white pencil skirt. The crowd at the Magic Kingdom in Orlando, Florida, went absolutely nuts for the pop singer during the performance, which was originally taped on Dec. 8. But it's worth the wait for a true gift for Grande fans to see their favorite songstress croon on Christmas in a Frozen Winter Wonderland in the Florida sun. Here's what you can expect during her Disney Parks Christmas Day Parade performance.

Much like her hits "Bang Bang," "Break Free," and "Problem," Grande's new Christmas track is undeniably catchy and already on the radio non-stop. In it, she worries Santa won't come around — and doesn't care. "Santa tell me if you're really there / Don't make me fall in love again if he won't be here next year," she sings.

She originally teased fans to the song's existence on Twitter in November, saying "putting out a kewt Christmas song for u on nov 24th called Santa Tell Me! lil something for the holidays :) so excited #10DaysTilSantaTellMe." After the song was released on Nov. 24, "Santa Tell Me" peaked at No. 12 on Billboard's Adult Contemporary chart.

"Santa Tell Me" isn't Grande's first holiday-themed single. Last year, she released an EP called Christmas Kisses that featured a bunch of Christmas songs, including "Santa Baby," "Snow in California," and the Wham! classic "Last Christmas," which is a bit of a somber one. If you listen closely, "Last Christmas" is the often-covered theme song for the holiday lovelorn. "Last Christmas I gave you my heart / But the very next day you gave it away," says the lyrics on track.

Among the other artists who have covered the song are Jimmy Eat World, Hilary Duff, and Ashley Tisdale. But Grande's pipes truly put her own spin on the Christmas classic.