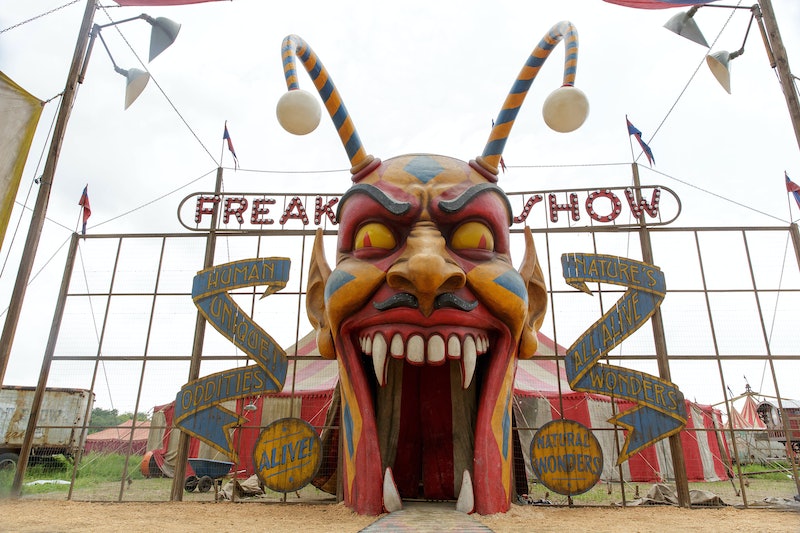 Last week, American Horror Story: Freak Show produced one of the season's strongest episodes to date as fans learned all the devastating details behind poor Pepper's backstory. To be honest, I still haven't stopped crying. (Naomi Grossman, you have ruined me for life!) So of course, now I'm invested in the show more than ever before, but there's just one little problem. AHS won't be returning until January for the final three episodes, which means we have weeks ahead of us to stew in our own personal horror story of withdrawal. (Well played, Ryan Murphy. Well played.) And I don't know about you, but three hour-long episodes just doesn't seem like nearly enough time to answer all the pressing AHS: Freak Show questions that are on every viewer's mind.

Because, let's face it, as it stands now there are still a TON of open ended storylines that need wrapping up before those final creepy credits roll. And since this season has kinda been all over the place lately plot-wise (we didn't even see Dandy last week), I'm growing more and more concerned that every character won't get their fair amount of time in the spotlight to tell their tale. So unless Murphy is prepared to handle the wrath of millions of dedicated horror fans, I suggest he follow through with all of these pending story arcs and provide us with some much needed answers to the following questions.

Will Stanley Ever Pay for His Crimes?

As of now this evil con man has managed to get away with his murderous deeds relatively scot free (Annalise Keating would be proud), which is insane since he's really not that good of a liar. I mean, are these characters really that gullible? We had better see justice served with this, Murphy. Ma Petite deserves some vengeance.

Does Dell Even Have a Purpose?

Aside from his whole gay revelation and being blackmailed to kill Ma Petite, Dell hasn't really been doing much these days. And what he has done hasn't really been all the interesting. So what's the plan with this? Is there a plan? Give us something to work with, writers, because this strong man has a rather weak storyline.

Will Desiree Get Her Happily Ever After?

Now that she has a new man by her side in the handsome form of Malcolm-Jamal Warner, it'd be great to see what actually becomes of that. Will Desiree get that white picket fence she always wanted? Will the two of them have babies? Did she ever get around to making that pot roast? I want to know!

How Does Elsa Become Famous?

Thanks to the recent Pepper-centric episode, we discovered that Elsa does indeed find the fame she's always been searching for after Pepper sees her former mother figure on the cover of a 1958 issue of Life magazine. But how exactly does she achieve such a feat? Stanley isn't actually a talent scout, so I highly doubt it's thanks to him. Perhaps all of the murders eventually end up attracting the media, giving Elsa a ton of access to a bunch of different outlets. It's hard to say at this point, but I hope Murphy makes a point of connecting these dots.

Will Jimmy Be Released from Jail?

Now that he's passed go and allowed Stanley to collect $200 (or whatever the cost of his lobster hands may be), does this mean Jimmy will actually be getting his get-out-of-jail free card? Or was Stanley lying about the lawyer and took all of the money for himself? I don't know about you, but I'm kind of over with seeing Evan Peters behind bars.

We get it. He's apparently packing some serious heat, but so what? Does it have magical powers? Can it predict the future? Is it used as a weapon? I'm not entirely sure what the point of this particular story arc is, but I sure hope it eventually leads to something interesting. Because right now it's getting harder and harder to care about.

Will Dandy Ever Get Caught?

Dude has been doing a lot of murdering lately and not exactly doing much to cover his tracks. Surely this is bound to catch up to him eventually, right? It's just a question of how many blood baths will come to pass before it happens.

Who Was Dandy's Therapist?

His face intentionally wasn't shown, but was that just to mess with our minds or will it come back as part of a bigger reveal further down the line? Please, don't forget about this, Murphy.

Are Paul & Elsa Still Hooking Up?

I mean, I know she threw a knife into his stomach and everything, but he hasn't really seemed that upset about it from what I can tell. Is that supposed to insinuate forgiveness? Did they kiss and make up? I just want to understand, people!

Are Bette & Dot Really This Boring?

Sarah Paulson is being seriously underused this season, which is saying something given that she's playing a double role. I'm sorry, but I just find them completely boring and I need this mistake remedied ASAP.

Was Dr. Pepper Really That Good Back Then?

I'm just saying that if it was delicious enough to trade an actual human being for three full cases it had to of been some pretty great soda. Consider me officially intrigued.