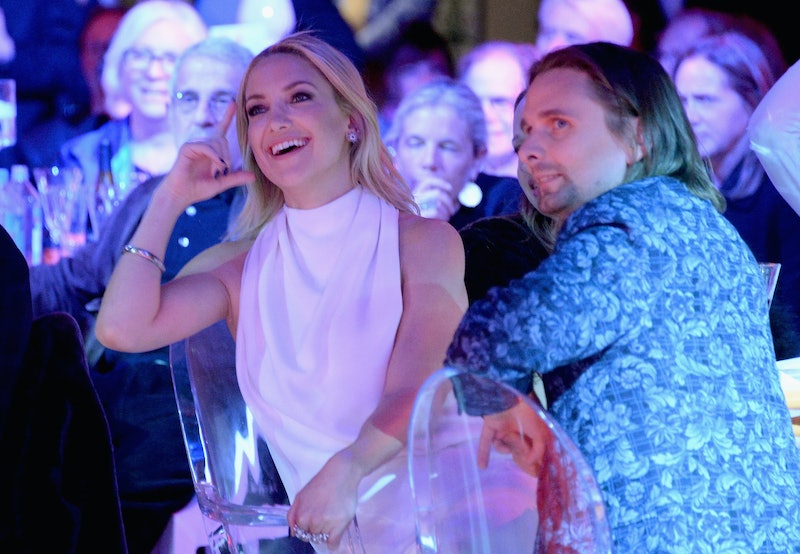 In other Love is Dead in Hollywood news, you might recall me spending quite a bit of time lamenting the fact that Kate Hudson and Matthew Bellamy ended their engagement. I was so busy mourning the death of yet another Hollywood love connection that I didn't even have time to spare on being offended that Hudson and Bellamy had been over for a "while" before any of us realized it was over between them. While initial reports claimed that the pair were still close friends and committed co-parents, there's a difference between saying that and actually carrying it out. However, it appears that Hudson and Bellamy are spending Christmas together in Aspen as is tradition for them and I can't decide if that's the sweetest or saddest thing I've ever heard.

I'm not saying there's no such thing as a truly amicable split, but it just seems utterly bizarre to me to fall back into old habits so quickly. The two of them have been together for four year whole years — at least prior to the split — so to hear of them covering familiar ground in Aspen and acting for all the world like the two best friends that anyone could have is pretty heartwarming. However, that heartwarming moment is punctured with a drop of pain as E! notes the very clear fact that Hudson was not wearing her engagement ring during their outing. Just in case you got fooled into thinking there was a chance the couple might get back together from this.

"They seemed very cordial. Friends are with them. Kate's brother is there too. Overall, it looks very friendly and not romantic," an eyewitness said to E! Literally, it feels like Hudson and Bellamy might as well have been walking around with giant blinking signs that read WE'RE NOT TOGETHER, since they seem to be going out of the way to make this as non-coupley as humanly possible. And considering the Aspen trip is something they did in the winter as a couple up until now, it just comes across as really strange to me.

Then again, I find it incredibly weird that Gwyneth Paltrow and Chris Martin are getting along well enough for Martin to allegedly buy a house near Paltrow, so maybe I just find the entire concept of amicable exes to be a strange lie that the world is trying to tell me. Miranda Kerr and Orlando Bloom are two other amicable exes, but I've forgiven them their friendship at this point. They don't spend nearly as much time together as Paltrow and Martin, and now Hudson and Bellamy, do — and Bloom got in a fight with Justin Bieber that was allegedly over Kerr. Clearly, they're the normal kind of amicable. (Normal meaning there are some unresolved feelings there, duh.)

Essentially, while I'm glad that Hudson and Bellamy are getting along well enough post-split to feel comfortable making the same Aspen trip they once made as a romantic couple, I don't think they should be rushing things. There's a difference between carrying on a tradition and trying to force amicableness and this feels kind of forced to me. Then again, what do I know? They seem perfectly happy as they are.