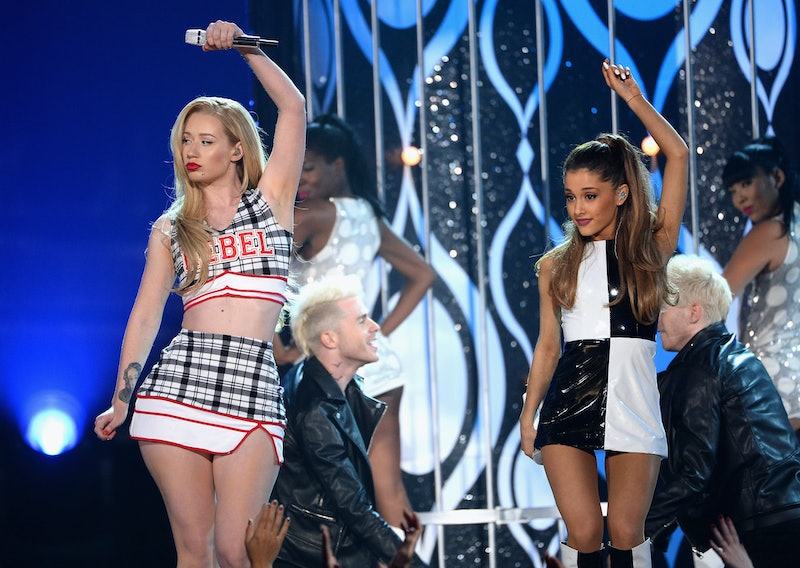 I was over this Iggy Azalea and Azealia Banks feud before it even properly begun. About the only thing I considered it any good for was teaching me the difference in spelling between "Azalea" and "Azealia" — and the first time Banks insulted Azalea for no apparent reason, I was already hoping that this wouldn't escalate. However, the feud did escalate — to the point where Banks is renaming Azalea everything from "Igloo Australia" to "Itchy Areola" and Azalea is calling Banks a "miserable, angry human being." But when you stop and think about it, Azalea and Banks' name-calling is just a distraction from larger, deeper rooted issues in cultural appropriation and their little war is completely burying that point.

Banks and Azalea aren't listening to each other, and that's a problem. Their feud undermines the discussion of the actual topic of cultural appropriation that exists in the music industry. While it's easy to sit back, grab a bowl of popcorn, and settle in for the latest celebrity feud, it's more important to examine the overreaching debate. It's not simply about whether you like Azalea's music or Banks' music or prefer Azalea as a person or Banks as a person. Not anymore.

Recently, Banks did an emotional Hot 97 radio interview in which she broke down when discussing the effect that it has on her as an artist to see white performers being lauded and complimented, praised and awarded, for appropriating black culture. Specifically, she cited the fact that Azalea had been nominated for a Grammy despite her music not being better than that of any black rapper out there in the world. While Banks has an unnecessary beef with Azalea in particular, she makes a sound argument when it comes to music, an argument that has been going on for decades.

"When they give these Grammys out, all it says to white kids is: 'Oh yeah, you're great, you're amazing, you can do whatever you put your mind to.' And it says to black kids: 'You don't have sh**. You don't own sh**, not even the sh** you created for yourself,' and it makes me upset," said Banks. "At the very f***ing least, you owe me the right to my f***ing identity. And to not exploit that sh**. That's all we're holding on to with hip-hop and rap."

Many people — myself and Azalea included — made the mistake of believing that Banks was calling out Azalea specifically for doing better in the rap game than she was. Many people made the mistake of believing that this was about Banks' career and thus disregarded her point entirely. However, it's becoming increasingly obvious that Banks is just trying to take a stand against cultural appropriation, a stand that's rendered shaky by her drawing Azalea into this when she didn't need to be.

When Azalea responds to Banks' criticisms, she is stepping into the middle of an ongoing controversy. For a long time, people have been unclear about the difference between cultural appropriation and cultural assimilation — does the fact that something originated in another culture by its very nature mean that other cultures can't adapt it into their own? Isn't history just a melting pot of cultures borrowing from each other? Azalea and her supporters are arguing that there are plenty of black artists succeeding in the rap and hip-hop game and that white artists, such as Azalea, producing African-American inspired music like rap and hip hop is not a form of cultural appropriation. It's evidence that the genre has gone global — and that's a good thing.

Banks' animosity toward Azalea stems from her own frustration with cultural appropriation, but her anger is not specific to Azalea. At least, it wasn't at first. This controversy is about white privilege and the way society views Azalea and artists like Azalea. It's about what Banks views as a loss of cultural identity that happens when the biggest names in a genre of music invented by African-Americans are the names of Caucasian musicians. Azalea is only the most current example of the cultural appropriation dilemma, due to her recent Grammy nomination, and the most visible example for Banks to use to make her point. Thus, when Azalea defends herself, she draws ire from Banks for missing the racially-charged debate and, in Banks' own words, "[making] this about her." Thus the feud escalates between them, and the point is lost.

Is There a Right Answer?

The right answer is for both artists to take a step back from feuding with each other and instead work on spreading awareness among their mutual followers. The subject that they're discussing is much bigger than rapper against rapper, or woman against woman, and the fact that Banks and Azalea are disagreeing with each other and don't seem to like one another very much doesn't matter at all in the grand scheme of the controversy. When you talk about the Banks-Azalea feud, be aware of how deeply it runs and what they're actually fighting about before you pick a side.

More like this
Mel B Speaks Out Against Domestic Violence In A Powerful Speech
By Sophie McEvoy
Kesha Is Down To Be The Next Bachelorette
By Jake Viswanath
Everything To Know About Taylor Swift’s 10th Studio Album, 'Midnights'
By Grace Wehniainen and Jake Viswanath
Dan Levy Appears In The Latest Teaser For The Weeknd's HBO Series, 'The Idol'
By Jake Viswanath
Get Even More From Bustle — Sign Up For The Newsletter