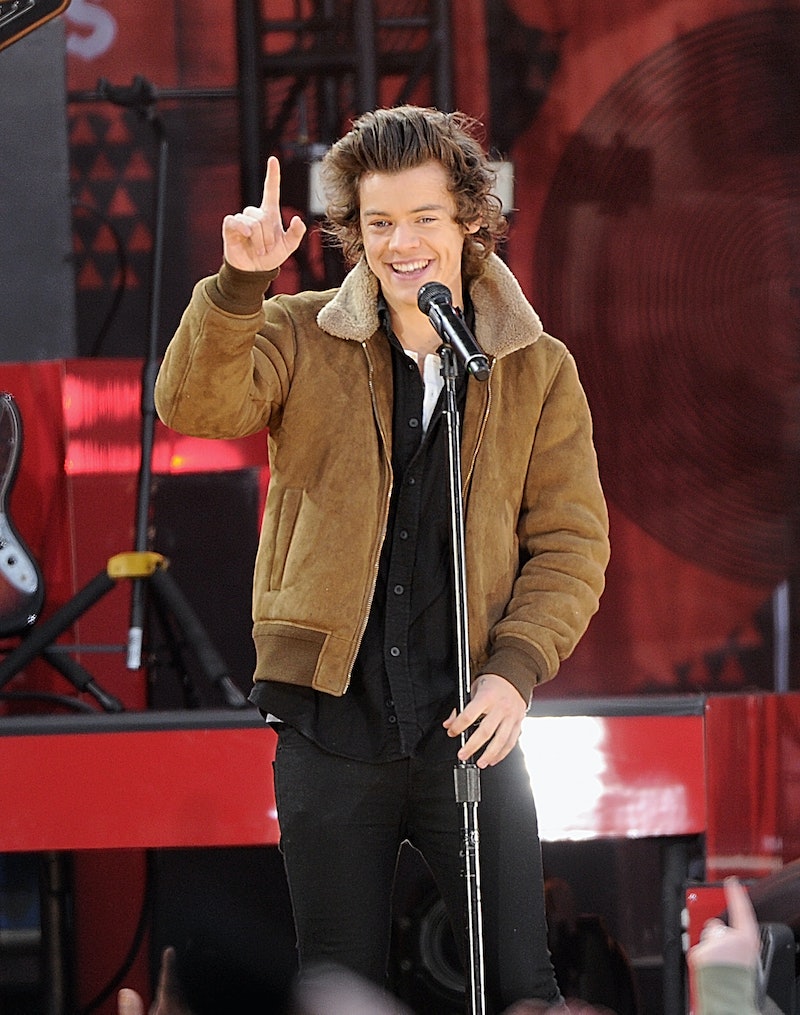 When the weather outside is frightful but the fire is so delightful, One Direction fans know it's officially time for Mr. Dreamy Locks to land himself a seasonal main squeeze. From the supposed things with Taylor Swift to Kendall Jenner, Harry Styles has garnered a reputation for romance in the colder months. Why does Harry Styles have winter girlfriends? Is it for warmth? Perhaps he wants a secure NYE kiss partner? Maybe, just maybe, he craves a body to spoon while watching Love Actually.

In interviews, Styles has hinted at the origin of this winter tradition in a rather tongue-in-cheek way. DJ Scott Mills for BBC Radio 1 asked the boys of 1D if they had ever gotten a girlfriend just for the winter. Styles was the first to answer, as the question was primarily directed at him. "Not on purpose!" So self-aware this one... Then, Styles joked, "You know what? I don't think I'm gonna get enough Christmas presents this year." PRESENTS. OF COURSE! Even if he gave this answer in jest, this sounds like a good enough reason to me. Also, the opportunity to attend parties in matching holiday sweaters is always a rational motivation to fall in love.

But he can't get away that easy. Even if Styles has tried to laugh this pattern off in the past, he certainly appears to have a winter girlfriend pattern. Let's make a timeline to try to tease out the reason for this apparent habit, shall we?

In November of 2011, Harry Styles struck up a romance with Caroline Flack while at an X Factor party —Styles had won the competition with One Direction the previous year, and Caroline was the host. As the significant other of any teenybopper idol will, Caroline incurred plenty of Twitter troll hate at the time. In January 2012, Styles confirmed that he and Flack had split after three months of dating. Given the fact that they hooked up at a party, maybe Styles linked up with Flack because she's a fun holiday bash companion.

The dawn of Haylor, the romance heard 'round the world, began in December 2012 and reportedly cooled off just a month later in January 2013. During their short affair, they participated in some hardcore winter activities like snowmobiling (remember that accident? RIGHT?!). Perhaps this gives us an insight into the potential winter girlfriend motivation. After all, a snowy-month significant other doubles as a built-in winter sports partner.

In November of last year, rumors flew of a Harry Styes/Kendall Jenner fling after the pair was spotted out at an intimate dinner in LA. The pair consistently claimed that they were "just friends," but we've all heard that one before. In January 2014, Sugarscape published a story heralding the end of Hendall. According to a source from Hollywood Life, Styles found Jenner a "bit barmy (British slang for foolish)" and their relationship "was never official, more of a fling." If anything, maybe he was just looking for a companion to sample various holiday pre-fixe menus with.

According to The Daily Star, Styles has allegedly been seeing Roxie Nafousi, a British stylist, since the two were spotted being amorous as a party in October of this year. A source told The Star that "they are close but it isn't serious and they are just taking it slow. That seems to be why it is working for them." Just saying, man. Nobody gives a Christmas present like a fashion stylist.

Given my expert opinion (if we're counting those who are experts in their own minds...), it looks like the winter girlfriend phenomenon is a pattern indeed for Harry Styles. But if we're trying to isolate a motivation, I'd say there are plenty of hypotheticals. A holiday dinner cohort is a possibility, as is a winter sports buddy. Let's not forget the all-important possibilities of a holiday party partner in crime, and those expert gift-givers.

In all likelihood, Styles is probably looking for a delicate balance of all of these elements in a winter girlfriend. You know, just like people generally seek in non-seasonal partners.

More like this
Olivia Wilde & Harry Styles' Relationship Timeline Started With 'Don’t Worry Darling'
By Jake Viswanath
Everything To Know About Taylor Swift’s 10th Studio Album, 'Midnights'
By Grace Wehniainen and Jake Viswanath
Taylor Swift Wants To Direct A Movie Next — But You Might Have To Wait
By Radhika Menon
Justin & Hailey Bieber’s Relationship Is “Unbreakable” After Their Two Health Scares
By Bustle Editors
Get Even More From Bustle — Sign Up For The Newsletter