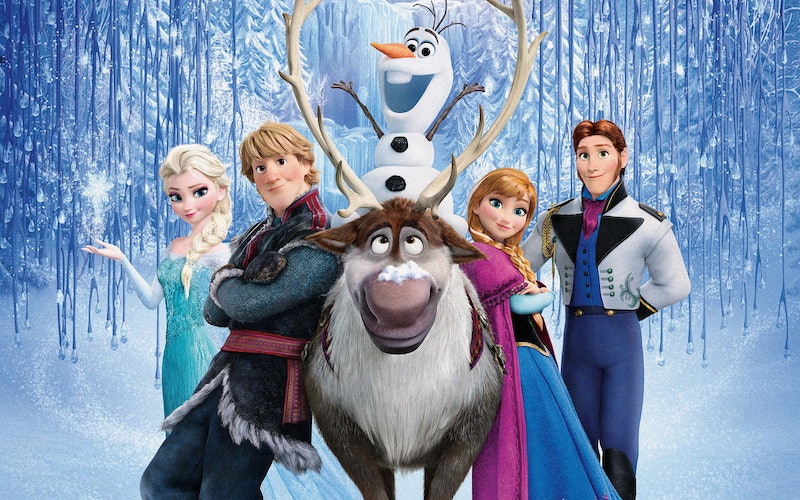 Just when you thought you couldn't hear any more about Anna and Elsa, Frozen was named top entertainer of the year by the Associated Press. That's right — an animated movie that came out in 2013 beat out the likes of Taylor Swift, Matthew McConaughey, Jimmy Fallon, and Benedict Cumberbatch. All in all, the Arendelle favorites scored 12 votes out of 47 ballots submitted by AP members and subscribers, with Swift as runner-up with eight and McConaughey and Fallon tied for third (both with seven votes). For the record, a movie has never received this accolade before — previously stars like Jennifer Lawrence, Lady Gaga, and Adele were the entertainers of the year.

Considering that Frozen frenzy really took over in 2014 after the film debuted last Thanksgiving weekend, it's no surprise that it smashed the competition. Yes, there is an adorable talking snowman named Olaf who steals the show, but the center of the story isn't about finding true love or a prince to settle down with. Instead, it was about two feminist princesses whose sisterly bond saved them, and the battle along the way was all about embracing your true self and being accepting of those who are different. There are so many incredible messages, and I hope kids will never let them go. (Sorry, had to sneak in one last pun.)

More like this
Christian Bale Sang With Taylor Swift & His Daughter Can't Believe It
By Radhika Menon
Did 'Grey’s Anatomy' Just Drop A Major Taylor Swift Easter Egg?
By Grace Wehniainen
At 28, Melanie C Was Falling In Love & Reclaiming Her Confidence
By Olivia-Anne Cleary
At 14, Jurnee Smollett Was Taking Meetings With Missy Elliot & Lauryn Hill
By Chloe Foussianes
Get Even More From Bustle — Sign Up For The Newsletter