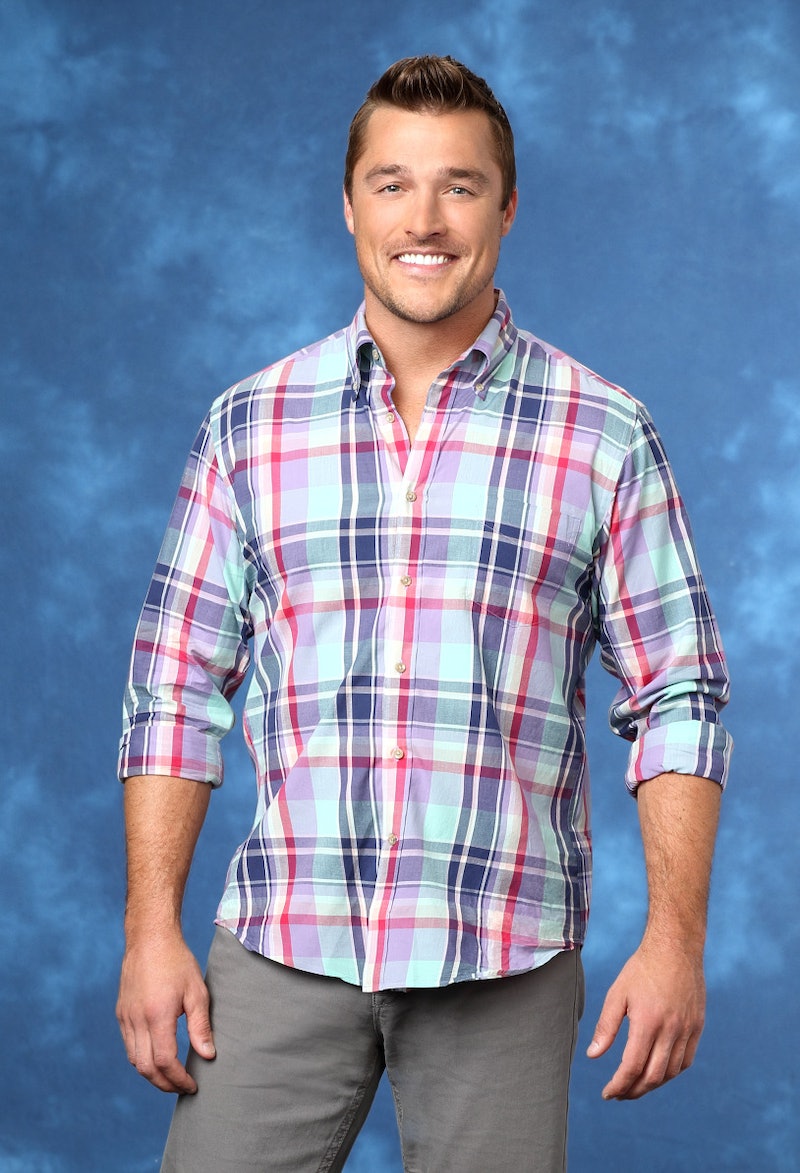 There's yet to be a single episode of his farm-tastic season and Chris Soules has already given away the ending of The Bachelor. He recently revealed to People magazine that he's "in love" which is a pretty big spoiler considering that's the question everyone tunes in to answer. "I am happy I did [the show]," Soules told the magazine. "I don't think I could get through that again, [but] I'm extremely happy with the outcome. I'm happy to say I'm in love. That's pretty crazy!"

But just because he said he's in love doesn't necessarily mean everything turns out exactly the way it's supposed to. Remember when Desiree Hartsock declared she was in love with Brooks Forester like three episodes before the finale? Everyone was like, well why bother watching now?? But then Brooks dumped her and lots of drama ensued. When it comes to The Bachelor or Bachelorette, you can't take everything at face value.

But I am curious whether or not Soules being in love means he proposed, she said yes, and everything is fine and dandy. So I've gone back through the last seven Bachelors and Bachelorettes to see how their pre-show talk matched up with their finale outcome. That way we can try to figure out if Chris Soules' confession about being in love means what we think it means.

She walked off her show with Josh Murray as her fiance, and the couple has been going strong ever since. But what did Andi Dorfman say about her finale before her season started? In an interview with People she didn't disclose whether she was in love, but she might as well have. "I am happy," she said. "I'm excited for everyone to see how this turns out."

When it comes to the women, they tend to be pretty happy if the show ends in a proposal. So I'm not surprised that her pre-season feelings lined up with the outcome.

We should have known better that JP's season wasn't going to end well considering what he said before the show kicked off. When asked whether he would repeat his journey knowing how it ended he replied, "I don't think so. Probably not." That didn't bode well, and knowing how the finale went I'm not surprised he didn't want a redo. Andi dumped him, Clare yelled at him, and Nikki didn't even get a ring.

We probably should have seen that coming considering he admitted marriage wasn't even on his mind when asked about a TV wedding. "Getting married on TV, I'm not sure. You know, I don't know," he said. "I'm from Venezuela and weddings in Venezuela are big, and music – I don't know how this works. I have no idea. So, I'm not even thinking about that."

If we'd paid more attention to his words we might have known that he was going to be one of the worst Bachelors ever.

She prepared us for an emotional journey prior to her season, and her words were pretty negative.

I'm glad that I decided to do the show and am satisfied with my decisions throughout. I followed and trusted my heart the best I could ... There are going to be tears, but I wanted to show all my emotions so viewers can really see where I'm coming from. Overall, it's a journey of love and love isn't always happy because there are ups and downs as you're guiding and gauging where the relationship should go ... the journey was incredibly emotional and really surprising throughout.

Judging by her comments I would never have guessed that she'd get engaged during the finale and still be with Chris Siegfried today.

This Bachelor spoke of a conflicted heart before his season started. "I had no idea I would become so attached and so emotionally invested in multiple women," Lowe revealed. "I'd heard about that happening on past seasons from people who'd done the show, but I thought that would be so hard. But it can happen, and it did happen."

He became so emotionally invested in multiple women that he actually told both Lindsay Yenter and Catherine Guidici that he loved them during the finale. But ultimately he sent Yenter packing and proposed to Guidici. From his pre-season words, though, I might have speculated that he couldn't decide and ended up with no one. We now know that's not the case, so his comments were a bit misleading.

She didn't reveal if there was a ring in her future but did tease that she "was happy before the show, but really happy now." That lines up with her show's finale which featured Jef Holm proposing to her. Unfortunately they couldn't make things last, but she's married to a different man now and seems happy as can be.

He declined to talk at all about his journey before the show started but his grandma spilled to a local paper for him. "He can’t say anything about it," she told the New Haven Register. "But I will say, he just seems happy to me. So I think maybe he found someone. I can’t wait to find out."

Flajnik did find someone and proposed to Courtney Robertson during the finale. Unfortunately her antics on the show drove them apart as it aired and their relationship was basically over before it ever began. So his grandma was right, but it didn't end up being the whole story.

This Bachelorette said the season was a "rollercoaster" for her but did admitted things ended on a good note. "All those questions are things you'll have to tune in to find out! But I will say I'm happy with the way things turned out for me." And she should have been! J.P. Rosenbaum proposed to Ashley Hebert during the finale and they've been in love ever since.

So where does this leave Chris Soules? I'd say about five of these seven past contestants told the truth before their seasons began and even Desiree Hartsock and Sean Lowe's comments, though misleading, were partially true. Based on this, I'd guess if Soules is saying he's in love then he must be. But, love doesn't necessarily mean there's a proposal and ring involved, so we'll just have to tune in to find out the whole truth as his journey unfolds.