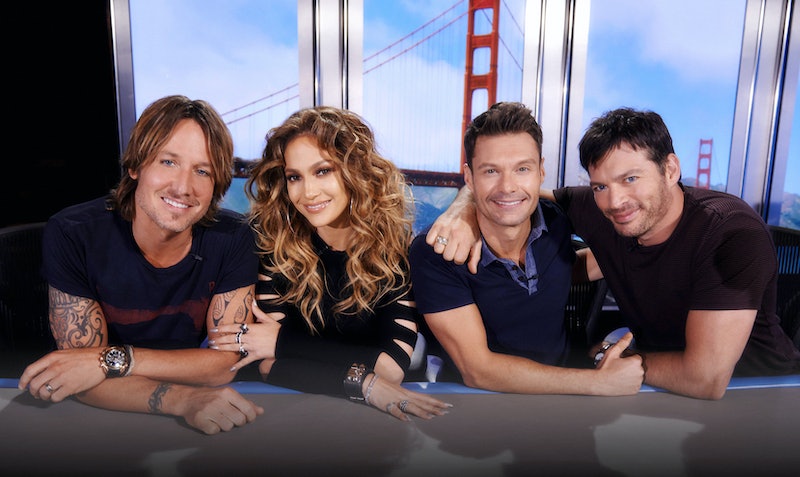 For the first few seasons, I was American Idol's biggest fan. I pegged Kelly Clarkson as my favorite when she belted out "At Last" in her audition and voted every week, I held viewing parties, and I went to the concert tours. It was an obsession. But then after a few years, I got bored with the same ol', same ol', and have barely tuned in — save for an episode here or there — since. But a new twist for Season 14 may have just dragged me back in.

Instead of showing a supercut of judges Jennifer Lopez, Harry Connick Jr., and Keith Urban giving comments to cringe-worthy singers and praising amazing ones, American Idol revealed the entire Top 24 before the season even starts. Granted, they're just silhouettes and shots of people walking away, but you get to hear them all belt out Nina Simone's blues classic "Feeling Good." Spoiler alert: they all sound amazing, and the contestants seem like a great balance of men and women with diverse backgrounds. The best part of this for me is that I can skip watching weeks of auditions. That is the longest and most dragged-out part of competition shows, and with this new tease, I can either just start watching at the Top 24 or play a guessing game throughout the long auditions. Either way, it makes the show more fun and breathes new life into Idol.

There are also two other big changes for the show: it will condense its two-night schedule into one night (just like Dancing With the Stars recently did, and other shows should really follow suit). Performances and vote-offs will happen on the same night now, which again makes it easier for people to commit to watching the series without feeling bogged down by four-plus hours of TV per week. Former mentors Randy Jackson and Jimmy Iovine will be replaced by Scott Borchetta, the president and CEO of Big Machine Label group who discovered Taylor Swift when she was 14. So, hey, American Idol, when you return on Jan. 7 at 8 p.m. ET, I think we have a date.

More like this
18 Years After 'American' Idol, Jennifer Hudson & Simon Cowell Reunited On Her Talk Show
By Radhika Menon
20 Years Later, Kelly Clarkson & 'American Idol' Judges Reunite For Her Hollywood Walk Of Fame Star
By Radhika Menon
Jason Derulo Is Launching A New Singing Show In The UK
By Maxine Harrison
What’s New On Netflix: Meet 'The Real Bling Ring'
By Arya Roshanian
Get Even More From Bustle — Sign Up For The Newsletter