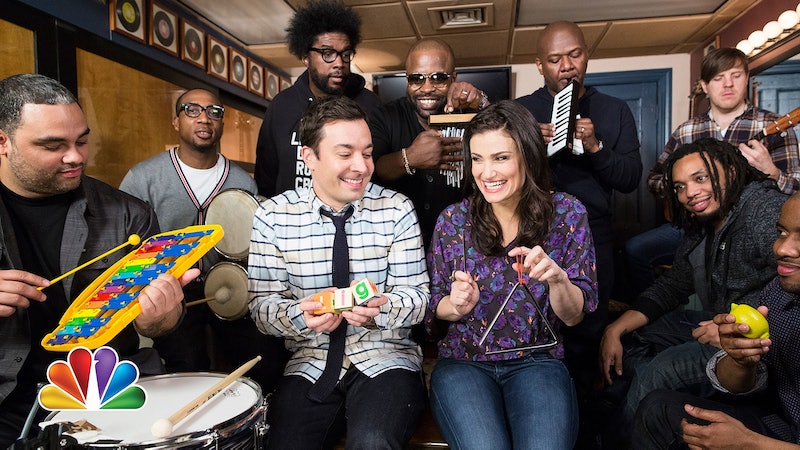 When it comes to memorable late-night videos, Jimmy Fallon has it down pat. From epic lip-sync battles with Emma Stone to camp sketches with Justin Timberlake to the infamous "Ew!" fun with stars like Zac Efron, basically everything he touches goes viral. Although I love his over-the-top moments, sometimes the best parts of The Tonight Show are the most simple, like his classroom instrument music videos. He's done quite a few of these now — the most recent featuring One Direction singing "Santa Claus Is Coming to Town" — with The Roots, and each has gotten better, added more instruments, and gotten the songs stuck in everyone's heads.

Back in Christmas 2012, he had Mariah Carey sing "All I Want For Christmas Is You," and he's also had Idina Menzel belting out "Let It Go" and Carly Rae Jepsen putting a quirky spin on "Call Me Maybe." Since you probably can't remember them all, I've rounded up all eight of them below, in chronological order to show how much they've changed over the years. Out of all his recurring bits, this is definitely one of my favorite, though it doesn't include Efron wearing a wig and a dress. Maybe Fallon can get him to reprise his High School Musical role sometime...

This was Fallon's first-ever classroom instruments video in June 2012, and it will get stuck in your head all over again when you watch this.

For those who wrote off Xtina as just a Voice judge, this impressive rendition of her song will blow your mind. She may take breaks from making new music, but when she does perform, it's incredible. This one debuted in Nov. 2012.

Mariah Carey — "All I Want For Christmas Is You"

Ah, the best Christmas song ever. Carey even makes a diva-like entrance after the song begins in this Dec. 2012 video.

Remember when this song was catchy and before we all wanted to forget about Thicke? In Aug. 2013, he had some fun with Fallon & The Roots.

Warning: this is the cutest video of the bunch, which Fallon filmed in Sept. 2013.

Because he couldn't forget the Frozen song. It would be a crime, and Elsa would probably freeze his studio over. This happened earlier this year in May 2014.

Meghan Trainor — "All About That Bass"

There is no bass in this song, but rather just a bunch of fun instruments as Trainor belted out her hit single in Sept. 2014.

One Direction — "Santa Claus Is Coming to Town"

Get into the Christmas spirit with the boys' glorious ugly sweaters! This was, of course, just posted in Dec. 2014.

More like this
The Spice Girls Just Dropped A Brand New Music Video
By Sam Ramsden
Lindsay Lohan & Jonathan Bennett Celebrated Mean Girls Day Very Differently
By Jake Viswanath
Twitter Is Unravelling Over Wolverine’s Return For 'Deadpool 3'
By Darshita Goyal
What Does Nancy Jo Sales Think Of 'The Real Bling Ring'?
By The Editors
Get Even More From Bustle — Sign Up For The Newsletter