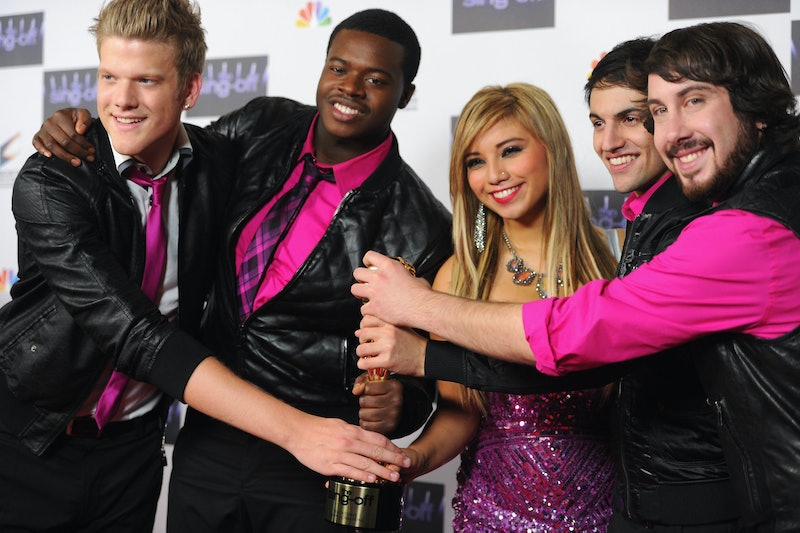 The best little singing show on television, The Sing-Off , returned for Season 5 last week to taunt us with its smooth bass and booming percussion for a one-night-only event that declared the series' first ever collegiate group, The Melodores, as the Season 5 winners. As dreamy as the Melodores turned out to be, and as fun as those two hours were, I wasn't thrilled when the decision was announced that this "season" would take place over the course of one night, Dreamgirls lyrics be damned. I need my annual 12 hours of a cappella fun.

But... I'll also take The Sing-Off any way I can get it. Despite producing a star bigger than anything The Voice has ever seen, NBC seems constantly on the verge of stealing joy from the world by canceling this show. So no matter how it needs to be broadcast, or streamed, or whatever, to continue, I'll take it. Because The Sing-Off is doing something different from every other singing show: it's offering something new.

The Sing-Off (followed up by Pitch Perfect) brought a cappella to the masses in its first season, and the result has been watching a cappella as an art grow and change with each new season of competing teams. The show has built an incredibly diverse crew of winners over it's five seasons, and well, I hope I get to watch Nick Lachey make music puns for many more years to come. Let's take a look at how the five Sing-Off winners rank from worst (which is still pretty great) to best, and their standout performances from the show.

Ranking the Vanderbilt University Melodores lowest is no statement on their talent and potential, it's simply that, with only two Sing-Off sponsored performances, we've seen quite a bit less of them than any other Sing-Off winner. BUT THAT LAST PERFORMANCE, THOUGH. The Melodores performance of "Take Me to Church" is one of the best things I've ever seen on The Sing-Off. A bunch of college boys are about the last people you'd expect to lay their emotions bare, but after a fun and kickin' Jason Derulo number, the guys flipped their collegiate image on its head and won the competition with raw talent.

Committed got better and better as the season went on, but something about their first performance on the show so encompassed their vibe that it's what I will forever remember about them. Those opening harmonies! Committed were boys raised on gospel music, trying to figure out how to apply those same a cappella techniques to Top 40 (aka secular) music, and they absolutely nailed it with "This Love," endearing the judges so much to their "butta'" sound, no one else in Season 2 could ever quite surpass them.

Nota were classic a cappella, but somehow made the musical style formerly defined by sweater vests and bow ties seem cool. I still can't listen to Jay Sean's "Down" without hearing those dum-pop-pops drop in right after "you oughta know..." and every person listening to my accompaniments is always grateful for the impromptu additions of my Nota-esque vocal stylings, I'm sure. For a lesson in how to manage to keep your swag while wearing coordinating aqua-colored outfits, I would recommend Nota's Jackson 5 medley.

The Sing-Off is just about the only singing competition on television that doesn't end up leaning toward country artists because of voter base. No, The Sing-Off waited until it found exactly the right country a cappella crew — which is to say, the best — before opening that door. Home Free is just five guys, but they have a bass to rival any other, pitch-perfect soloists, and surprisingly sparkly fashion sense. All of Home Free's live Sing-Off performances are prevented from being embedded here, but I would highly recommend you check out their live, sweeping performance of "Ring of Fire," which is just as good live as the more produced version above.

Obviously you knew it was going to be Pentatonix — they're nominated for a damn Grammy this year! Pentatonix completely changed the game from the very first time they hit the Sing-Off stage, constantly shocking the judges and audience with their arrangements and the sheer amount of noise they were able to make. I remain in awe of just how perfectly those five people fit together and how all five function on so many different vocal levels. On another season, Urban Method or The Dartmouth Aires could have taken the crown, but everything changed after Pentatonix's performance of "Video Killed the Radio Star." To make something that while yes, it could be on the radio, sounds like nothing on the radio, is a feat that no other winning group has accomplished quite like Pentatonix. OK, and one more for the road!