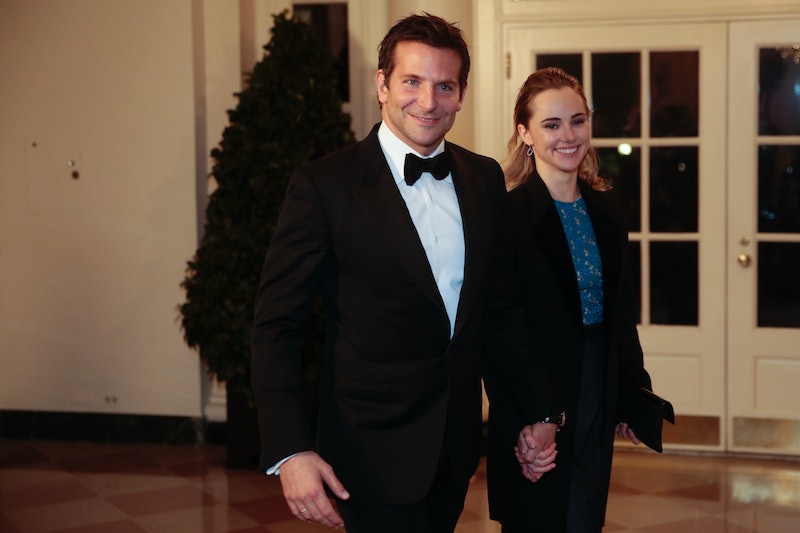 A whole host of films are set to premiere on Christmas Day, but I'd be hard pressed to find one that looks more intriguing or riveting than that of American Sniper, starring Bradley Cooper. So, while I nail bite, cry, and selfishly revel in his luscious, Academy Award-nominated beard, I'm forced to remember that, le sigh, the American Hustle actor has been a taken man for quite a long time now. He and his girlfriend, British model Suki Waterhouse, have been an official item for nearly two years. But, how did Bradley Cooper and Suki Waterhouse meet?

As any good Hollywood couple, the pair met at an awards party, duh. Where else would they meet, really? A singles mixer? Waterhouse elaborated on their chance encounter telling Rollacoaster magazine, "I met him at the Elle Style Awards in London last year [2013]. We were introduced and hit it off almost immediately. We were dancing at the after-party, and he asked me if I fancied going to a club."

The magazine pressed on, referencing Cooper's rhythmic inclination, and asked if he was as good a dancer as he was thought to be and where he took her out. Waterhouse responded, "We went to Cirque le Soir in London — and he’s a ridiculously good dancer, yes. But I’m a serious dancer too, so I don’t know if I was fully concentrating on that. We make a pretty good duo, though." Ugh, that'd be an even cuter story if we didn't all wish we were Suki ourselves.

To let the reality of their relationship sink in so we can move on, let's look at the two year romance through a timeline.

About the time Cooper met Waterhouse, Jennifer Lawrence told MTV about Cooper: "I feel like all I've been doing lately is setting him up. I told him, 'You know what? I'm going to save time. I'm going to get you a booklet of pictures of my friends and you just go through and pick them out. Because this is getting exhausting for me."

Bradley and Waterhouse were caught together in Boston when Cooper was filming American Hustle. Gasp!

August 2013: The Couple Is Spotted in Paris with Waterhouse's Sister

Well, thats killing two birds with one stone. Spending time with family and visiting the most romantic city on Earth looks pretty serious to me.

Red carpeting all over the world. Or, like, LA. Cooper brought Waterhouse as his date to the SAG Awards and the Oscars, but took his mom to the Golden Globes. And who could be mad about that? No one, that's right.

July-August 2014: Rumors of a Breakup

After there were paparazzi pictures snapped of them "fighting" (or, you know, just simply talking), rumors spread that their relationship might be going down the tubes. Except, like all rumors based in fiction, they were quickly put to rest when they were seen out together just a short while later.

The couple were seen together in New York in late November, and Waterhouse also went to see Cooper in his play, The Elephant Man, in December. For all intents and purposes, it appears that these two are in it for the long haul.