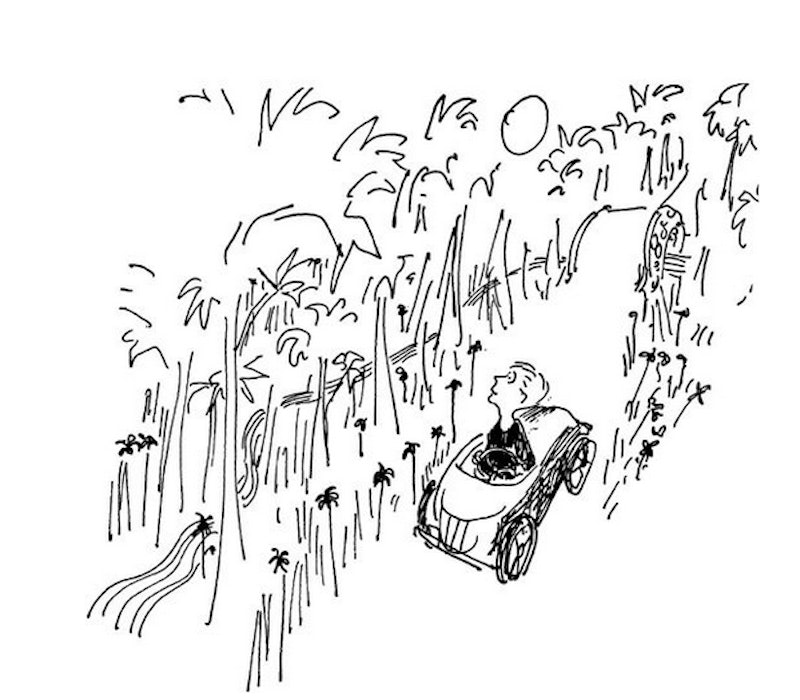 I am, was, and forever will be a massive book nerd. It began when I was a kid, poring over anything I could get my hands on. This included everything from cereal boxes at breakfast to heady academic tomes in school. My dad was all, "You are five and thus should not be attempting to slog through my copy of Heidegger's What Is It That We Call Thinking". He was not wrong.

While I've read an insane amount in my time on earth (trying to figure out just how many books I've waded through makes me want to lay down in a field of gold with Sting), there are definitely some books that have made greater impressions on my easily-influenced little mind than others. One of the biggies for me was The Phantom Tollbooth by Norton Juster. The strange, transporting story and the killer illustrations by Jules Feiffer had me at hello, to get very Jerry Maguire about it. Even now, it still holds up. The movie's might be only okay, but the book is sensational. Here are 10 reasons why:

1. It Made Every Tollbooth a Magical Possibility

I adore any book that inspires wistful, magical feelings well into adulthood. True story: My roommate and I were on a road trip, neither of us had slept in days, and we were approaching an automated tollbooth at an admittedly unsafe speed. She was driving. I didn't say anything about her speed because I figured she knew something I didn't. Were we about to enter another world? No. We were about to take the arm off the tollbooth and seriously damage our rental car. None of this was fun in real life, but what is fun is being a grown-ass adult and having a book still make you believe that this kind of magic is possible.

2. It Inspired My First Band's Name

The Doldrums! When I was in high school and could play nary an instrument but still harbored dreams of rock stardom, I insisted that my siblings and I start a band. Clearly, we named ourselves The Doldrums. While I became more realistic about my future in pop music later in life, I still named the family dog Milo because my passion for the book is unwavering.

The road Milo drives down is called Expectations! Tock the WATCH dog, who had a watch in his actual guts? I can't even with all the delightful puns and the even more delightful wordplay. If anyone rolls their eyes at you for giggling at this sort of joke, they are not people you want to know.

4. It's the Only Book That Ever Made Me Appreciate Numbers

While I am a ride-or-ride word fiend, this is the first book that ever made me appreciate the beauty and power of numbers. Even more so, the princesses of Rhyme and Reason showed me the power behind the two when they work in tandem. Yeah, more things should be taught this way.

5. They Got to Eat Their Words

LITERALLY, THEY ATE THEIR WORDS. Man, the scene where Milo sits down to eat a feast of his own words is basically my dream. Just to be sure, I stopped type and said "honied figs". Sadly, they did not appear. This does not mean I will ever stop trying. CANDIES. CHEESE. EXTRA CHEESE.

6. It Taught Us That Artists are Babes

Three words: Chroma the Great. If you were unfamiliar with the notion that artists are powerful beings, Chroma conducting the setting of the sun would set you wise. Pretty fox, y'all.

One year, I thought it would be wise to dress up as the Awful Dynne. This involved me wearing my usual clothing and following my dad around making loud, terrible, obnoxious noises. It ended with me being sent to my room, my genius going, once again, entirely unappreciated.

8. It Bred a Healthy Mistrust of Authority

When Milo was arrested by Officer Shrift, I became incensed! Who did this short buffoon think he was? While I naturally enjoyed the pun of his name, I was enraged by his bad attitude. It is a simmering resentment that has stayed with me until this very day.

9. There Was Always a Chance The Tollbooth Might Find Us

The book ends with Milo bidding adieu to the magic tollbooth. You know what this means? That any second, when you least expect it, the tollbooth and its magic could find you. I literally just got chills thinking about that.

10. It Taught Us That Boredom Was The Enemy

When you're a kid, it's exceptionally easy to say that you're bored. This is the first book that made boredom a real, living thing that was the product of my own mind and in desperate need of vanquishing. Growing up can be the death of the imagination and that starts with boredom. I learned that from The Phantom Tollbooth.

More like this
Jessica Simpson On The Time She Was Pursued By A Backstreet Boy & An *NSYNC Member
By The Editors
We’ve Entered The Hot Boy Reader Era
By Samantha Leach
Netflix Shut Down 'Bridgerton' S3 Rumours About A “Very Dark” Storyline
By Bustle
Meghan Trainor & Daryl Sabara Are Expecting Their Second Baby
By Jake Viswanath
Get Even More From Bustle — Sign Up For The Newsletter
From hair trends to relationship advice, our daily newsletter has everything you need to sound like a person who’s on TikTok, even if you aren’t.