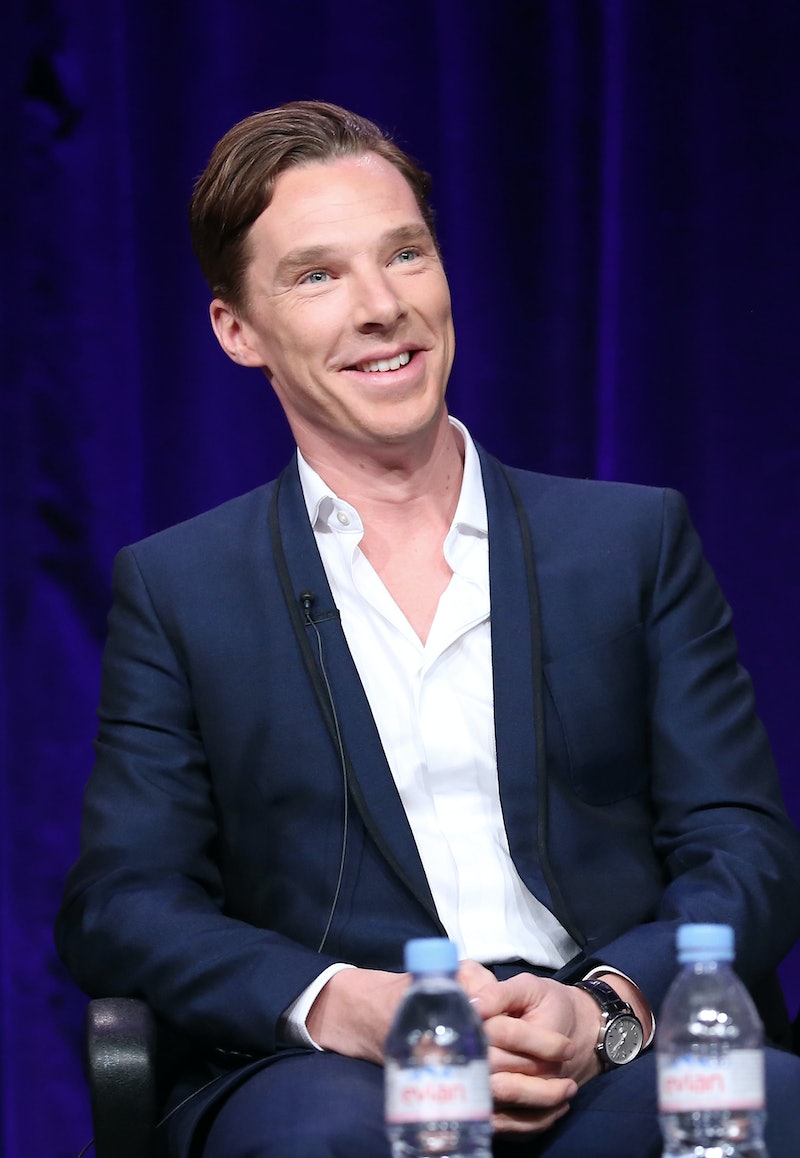 Can you believe the New Year is literally right around the corner? Where did the time go? If you're behind on making New Year's Eve plans, you're probably also behind on how you want to make 2015 a great year. That means you better start working on those New Year's resolutions, because there's not that much time left. Like us, stars also make resolutions, which got me thinking: what would Benedict Cumberbatch's New Year's resolution be?

Does he want to try and hang out more with his bestie Tom Hiddleston? (I think that's pretty much a given.) Do you think he wants to improve upon those beloved Cumberbatch dance moves? Maybe he wants to try and breathe fire like his character Smaug in The Hobbit ? Whatever he chooses, I'm sure Cumberbatch's resolutions will be amazing, because he always is.

With that said, here are 11 made-up resolutions for the actor. I have no doubt that Cumberbatch will look at this list and find inspiration. You're very welcome, Benedict. Seeing as I've taken it upon myself to do this, I'll take my payment in the form of actually being your assistant. I would gladly quit my day job. (Please don't fire me, Bustle.)

There's no doubt he'd make a fabulous host. Can you imagine if Cumberbatch shared his hosting duties with Tom Hiddleston? Just try and tell me you wouldn't tune in.

Seeing as Cumberbatch is nominated for a Golden Globe for The Imitation Game that means he has a chance at winning. Team Cumberbatch all the way!

Receive an Oscar Nom... and Win!

Like I mentioned above, Cumberbatch has a Golden Globe nom, which means he'll most likely earn an Oscar nom. Who wants to help me start planning an Academy Awards party revolving around anything and everything Cumberbatch?

Walk Down the Aisle

It's no secret that Cumberbatch is getting married, so 2015 just might be the year he'll finally call Sophie Hunter his wife.

Star in a Beyoncé Music Video

Benedict + walking like Beyoncé from "Crazy In Love" = a music video with Cumberbatch and Queen Bey... obviously.

Actually Star in a Movie with Reese Witherspoon

Anyone else freak out when they watched Cumberbatch and Witherspoon making out for The New York Times' 9 Kisses project? Yeah, me too, and now I need a movie starring both, stat.

Let's hope Cumberbatch attends the Golden Globes and pulls off another photobomb like he did with U2 and Ellen DeGeneres and Chiwetel Ejiofor.

It's no secret that Cumberbatch rocks at impersonating his fellow actors. So, maybe he'll want to teach others his talent. Sign me up!

Create a Feminism Shirt of His Own

Like Hiddleston, Cumberbatch also supports feminism. I think it's time for Cumberbatch to create his own shirt, or partner with Hiddleston. Those would sell out instantly.

Get Fans to Change Their Name

Cumberbatch loves his fans aka Cumberbitches so much that he wants them to change their name purely for a feminist reason. He's all about respect, which you have to love.

Get Tom Hiddleston to Guest on Sherlock

Anyone else been hoping Hiddleston will finally guest in an episode of Sherlock ? Well, it could happen!