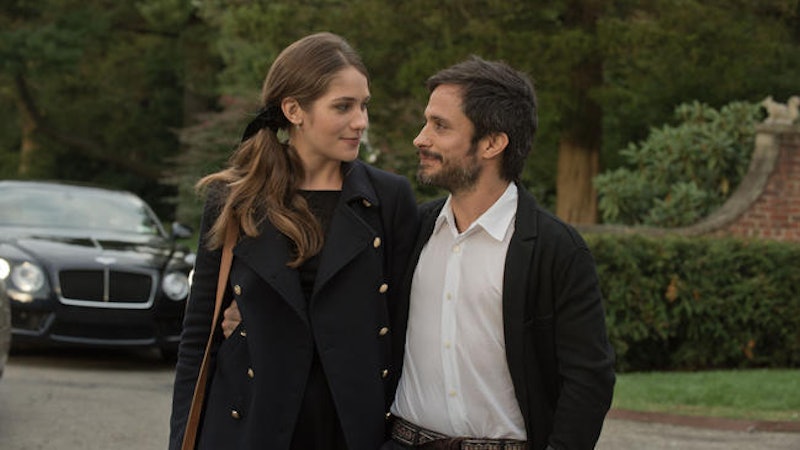 It probably seemed obvious from the first trailer for Amazon's newest scripted series Mozart in the Jungle , that nothing about the series would not be your typical philharmonic outing. Sex, drugs, and scenes not so suitable for work abound in this exciting new show starring Gael Garcia Bernal, Lola Kirke, and Saffron Burrows. But here's the great thing about the series: It's not just about the sex or even just that fact that classical music is still great and relevant. It's about the men and women who share the passion of classical music, and thankfully, the series actually gives women a voice in that community. While many of the promos and posters focus on Bernal's eccentric yet still endearing maestro Rodrigo, the show features women who are slowly, but surely being developed into wonderfully three-dimensional professionals, rather than simply support for the leading man.

The show opens with the youngest of our artists, Lola Kirke's Hailey, who plays in the pit of a new rock-opera based on Oedipus (the lead is played hilariously by American Idol and Broadway alum Constantine Maroulis). Here she meets New York Symphony veteran Cynthia who, in a way, takes Hailey under her wing and the two talk about the "underbelly" of classical music. In fact, their first big conversation is about how different members of an orchestra have sex: "Percussionists pound you like you’re in a porno. Kind of fun for about ten minutes. Good cardio." Yup. That's how we're introduced to these women, and to be honest, it's pretty great.

There are many moments throughout the series' first season where the women are handled in similar ways to the men, all of these women are working in the same capacity as their male counterparts (except for probably Bernal's Rodrigo who is different than his fellow musicians and maestros). But the contrasts of these women's personalities is another shining example of why this show is really smart.

Sure, there are some obvious cliches within the characters. Hailey is the ingenue who gets closer and forms a sort of companionship with Rodrigo's maestro. Cynthia is the veteran who knows her way around the orchestra and the men involved. Frances Ha's Hannah Dunne plays Hailey's promiscious and outgoing roommate. Debra Monk appears in a few episodes as a veteran oboist who is simultaneously threatened and annoyed by Hailey's quick inclusion into her orchestra. This is her first line to Hailey: "You're the completely inexperienced girl who f**ked our conductor to worm her way into the oboe section past hundreds of far more qualified musicians." Way harsh, Tai.

But despite these slightly cliched introductions, many of the women get the chance to really shine beyond how we first meet them. Turns out there's more passion to Hailey than we first see, this is evidenced by the fact that she blows up at Rodrigo's assistant for making fun of her breakdown during her first day on the orchestra. She not only stands up for herself but proves that she has passion and that she won't take the insults from someone who doesn't understand how hard she worked for a quick spot on the stage.

She even calls Rodrigo an "egomaniac with a parrot" and this act of rebelliousness is what inspires him to make her his assistant so she can grow under his tutelage and become a great oboist some day. And thankfully (spoiler alert!), this new pairing does not result in a romance... at least not yet. It makes more sense for Hailey to find true identity and strengthen her talent with Rodrigo's help platonically.

The only complaint I have is that while Cynthia's character starts out strong, her involvement in the story gets pushed aside for a bit. The character is revealed to be in bed with the New York Symphony's former conductor Thomas, who was replaced by Rodrigo at the request of yet another incredible woman Gloria (Bernadette Peters), the president of the symphony who is trying to prove that classical music is not irrelevant or dead. She's played by the always amazing Peters, so that definitely helps.

All that being said, I still need more. Cynthia's role beyond being a strong, celloist, veteran in orchestra and sometimes mentor to Hailey is a nice one but needs to go beyond that. We need to see her weather conflicts and get down in the muck as well.

I genuinely hope the show's inevitable second season (Please, Amazon? This show is too good not to have one), won't focus only on Rodrigo and his eccentricities (though that is a hell of a lot of fun) but also on the growth of Hailey, the conflict of Cynthia, the pressure faced by Gloria, and possibly even the collaboration between Hailey and her older counterparts like Monk's fellow oboist. We all deserve to see more complex, professional women on our screens, both large and computer-bound, and Mozart in the Jungle is certainly helping us get there.

More like this
Ramin Djawadi Is Living Out His Dreams
By Rebecca Long
'School Of Rock' Changed Joe Keery's Life Forever
By Alyssa Lapid
'Rap Sh!t' Season 2 Is Officially Happening & Will Include "More Seducing & Scheming"
By Brad Witter and Grace Wehniainen
UK Viewers Will Have To Wait To Watch The Handmaid’s Tale S5
By Maxine Harrison
Get Even More From Bustle — Sign Up For The Newsletter