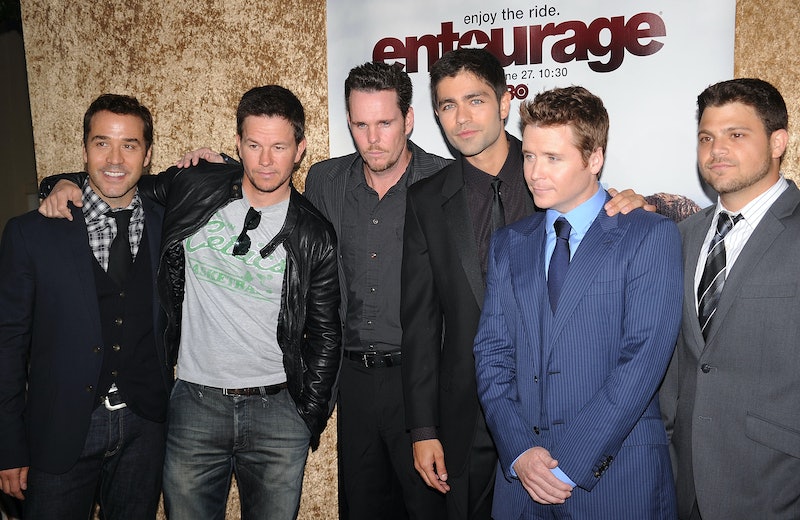 Fans of the bro-tastic HBO comedy Entourage are probably exchanging lots of high fives today now that the first Entourage movie trailer — the film of which is slated to hit theaters in the summer of 2015—has hit the web. (Or, if they are anything like Entourage super fan Michael Scott, they are simply crying out, "Entouraaaaaaage!") But, Entourage dudes and dudettes should go in to this thing with cautious optimism.

Because while the trailer basically looks like an extended episode of the Emmy-winning series (there's plenty of Ari freak-outs, Drama's inane musings on life, snippets of Vincent's inexplicable success, Turtle's there, gratuitous shots of hot girls, and celebrity cameos in the two-and-a-half-minute clip), fans of another popular HBO show, Sex and the City, had to learn the hard way that doesn't necessarily mean the best thing. In fact, the SATC movies made characters who were enjoyable in smaller installments on television every week became nearly unbearable on the big screen.

The series finale of Entourage wrapped everything up in a nice and convenient bow for characters who never faced any sort of real obstacles in the first place, so were viewers still wondering what the hell these guys have been up to? Eh, probably not, but anyone who endured all eight seasons of rampant sexism, homophobia, hugging it out, and Jeremy Piven screaming his way to three Emmys probably wouldn't mind revisiting the gang's Hollywood antics.

Alright, so this definitely looks like an extended episode of Entourage. Still, here's what the guys of Entourage should take away from the gals of Sex and the City before transitioning to movies.

The Entourage gang's natural habitat is Los Angeles, and that's where they belong. (Besides, as the trailer suggests, Drama has no interest in going back to Queens.) SATC only worked when the ladies were in Manhattan, which was proven in the worst way possible in the sequel, which largely took place in Abu Dhabi.

Don't Make It Too Episodic or Too Weighty (Literally)

Remember the worst part of the first Sex and the City movie? The inexplicable, completely unnecessary storyline about Samantha's weight gain post-Smith split. That gimmick would have barely worked in an episode, let alone as the subplot of a movie. It looks like the Entourage movie is focusing on Turtle's significant weight loss, but hopefully it's just a one-liner or two, not a major point of the flick.

The Sex and the City movie clocked in at a bloated 151 minutes, nearly five times what a regular episode ran. Unless you feel like binge-watching your favorite television show, two-and-a-half hours can feel like a daunting task. The Entourage movie should run no more than 90 minutes.

With all due respect to Jennifer Hudson, her part in the Sex and the City turned out to be such a throwaway character that took time away from the characters we actually wanted to get reacquainted with. Cameos are fine, but giving ample screen time that should belong to Lloyd would be a crime.

Don't Make a Sequel, No Matter How Much Money the First One Makes

The first Sex and the City, despite mixed reviews, made a whopping $415 million worldwide. While the first movie wasn't perfect, it gave fans a little more of what they needed (mainly Carrie finally marrying Big) and they could have left good enough alone. Sadly, they opted to keep the franchise going with the dreadful sequel, which was panned by critics and made significant less money ($288 million worldwide). If this Entourage movie isn't a total disaster, just leave it at that, dudes. The world barely needs one Entourage movie as is.