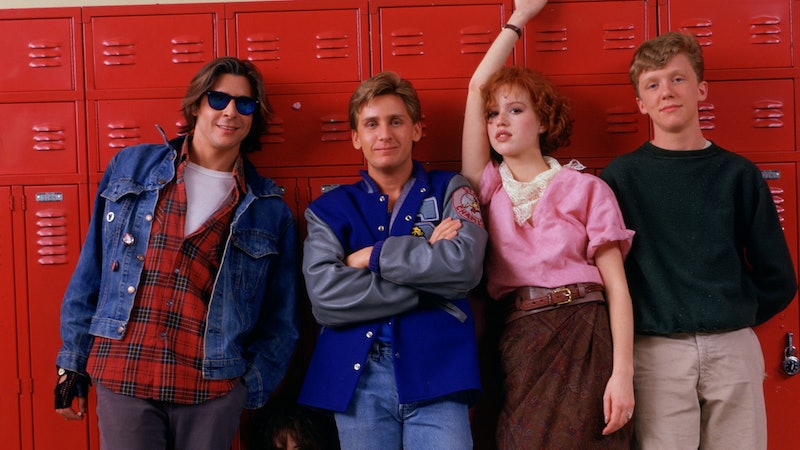 When you think of classic and beloved teen movies, undoubtedly one of the highest on everyone's list is The Breakfast Club. The coming-of-age drama by John Hughes set the precedent for many teen films that came in the decades after, and pretty much launched the careers of the actors now known as "The Brat Pack." This year marked the 30th anniversary of their chance meeting in detention, and it's safe to say that if The Breakfast Club was set in 2014, A LOT of things would be very different.

Back in 2008, there were rumors of a possible modernized version of The Breakfast Club with a film titled Bumped which would revolve around five twenty-somethings who were stranded at Chicago's O'Hare Airport and were forced to become friendly. Sure, this sounded like a cute idea, but as of now, it doesn't seem like that film is making it beyond pre-production. OOP.

The idea of a Breakfast Club remake did get some people talking, and after recently re-watching it, I wondered if a true modern version could even be possible in 2014. Yeah, high school kids still get detention, but I venture to say their day would be nowhere near the same as it was for five misfits on March 24, 1984.

The Epic Dance Scene Would Definitely Have Phoenix Playing

How perfect is this mashup? The original scene had the kids dancing around to "We Are Not Alone" by Karla Devito, but yeah, we haven't heard from her for a long time...

The Princess Would End Up With the Nerd

The pretty, smart girl would probably be super into the nerd's awesome new blog and 1,000 techie Twitter followers. Plus, being a nerd is ~cool~ now, right?

There Would Be a More Diverse Group

First, we really need some POC and LGBTQ representation, and not everyone usually fits into such a tight category of "jock," "nerd," or "weirdo" anymore. Well, maybe some do, but we definitely would need more diversity.

The Barry Manilow Insult Wouldn't Be as Relevant

One of the films classic lines is when Bender tells Principal Vernon, "Does Barry Manilow know that you raid his wardrobe?" I think kids born in 1993 wouldn't quite get that reference, so I'd say an equivalent would be someone like... Ryan Seacrest? Someone from Dancing With the Stars? Any other cheesy dude you can think of?

Brian Would Be Expelled or Worse

Brian was sent to detention for having a flare gun in his locker. Sorry, but we don't mess around with any kind of gun in schools, real or fake, nowadays.

Sigh. It's sad but, likely very true. At least we've got the original Breakfast Club to remind us of the way we once were. I'll think about it next time I'm around strangers on my train ride home or in line at the mall. Sometimes a small "hello" goes a long way.