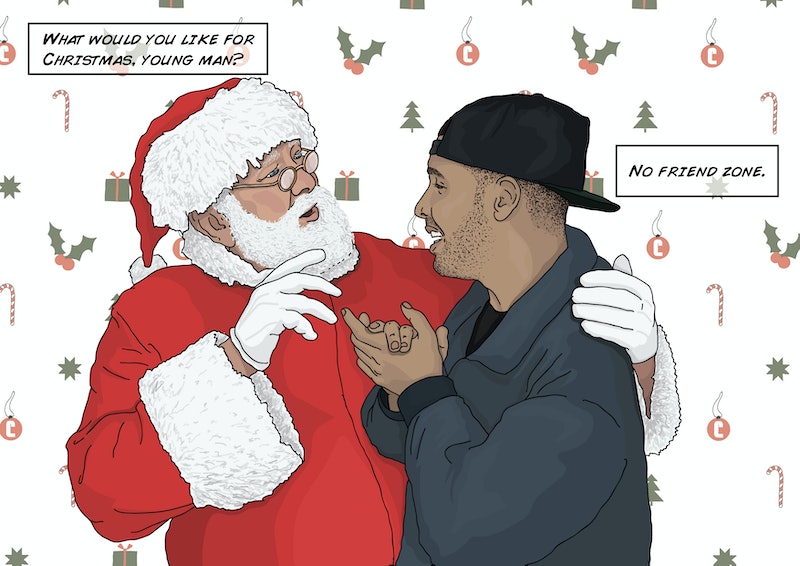 I have to admit, I didn’t really become a Drake fan until his guest appearance on Saturday Night Live earlier this year. Even now, I don’t consider myself the most loyal of fans, but even I can appreciate the genius that is the Drake-themed holiday postcards by Oli Holmes for Complex.

Even if you’re not a fan of Drake, somebody in your life is. If you care about that person and want them to be happy this holiday season, send them one of these postcards. They capture the very essence of Drake's complicated, sensitive rapper heart in a way that any fan would appreciate. When I asked Holmes if he was a fan of Drake he pointed out why most people like him.

“I am a massive fan of Drake,” Holmes said in an email. “I’m pretty sure he doesn’t take himself too seriously so he wouldn’t mind us having fun with him over this holiday period. Unlike a lot of rappers, he doesn’t seem to fall into the pattern of just talking himself up all the time, but actually talking about things that affect him, like love, loss, etc. But obviously that is where he can also get his soft persona from.”

Drake can go from being on his “Worst Behavior,” to seeing the best in Rudolph, to shedding a tear over a cold and beautiful woman. And that’s why we love him.

Although my favorite of the postcards is the above, “Too Fly” — it’s currently my Facebook cover photo — Holmes’ favorite is “Never Loved Us.”

“There isn’t much to say in the way of explanation in this one, but it is still so clear what we are trying to say (I hope!)” Holmes wrote. “The thing I think connects people with the card is that you have to know Drake and his lyrics to be in on it.”

If you don’t get Drake, then you won’t get the postcards. But like I said, there’s bound to be somebody in your life who would love a Drake-card or two. Head over to Complex Magazine for downloadable versions of the Drake postcards and spread the holiday cheer.

More like this
Bennifer, Kravis, & 14 Other Fun Celeb Couples Halloween Costume Ideas
By Emma Carey and Brittany Leitner
10 Stranger Things-Inspired Halloween Costumes For True Fans
By Emma Carey
Everything To Know About Taylor Swift’s 10th Studio Album, 'Midnights'
By Grace Wehniainen and Jake Viswanath
Beyoncé’s Special Tribute To Sister Solange Was Both Touching & Hilarious
By Stephanie Topacio Long
Get Even More From Bustle — Sign Up For The Newsletter