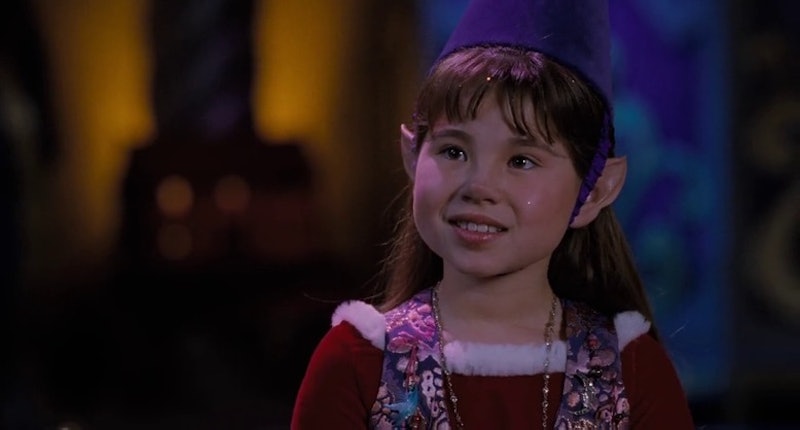 Though it's been 20 years since the Tim Allen-starring Christmas classic The Santa Clause, I know I, like the dedicated little The Santa Clause fan I am, can still recite a not-at-all embarrassing number of lines pretty perfectly. (As a child of the '90s, I still maintain that this is completely normal behavior.) Of all the great things about that movie, though, it was always my firm belief that the adorable Judy the Elf was one of the best, not to mention underrated. Seriously, was it even possible not to love her? The girl patiently understood that constructing the perfect cup of hot cocoa (not too hot, with extra chocolate, shaken, not stirred!) is a delicate, lengthy process that could take upwards of 1200 years — in fact, I really do think the whole world could benefit substantially if we all made an effort to be a little more like Judy the Elf in our day-to-day lives. That said, all this Christmas spirit going around as of late has got me thinking: Where is the actress who portrayed Judy the Elf, Paige Tamada, now? Like I said, it's been 20 years since The Santa Clause was released, and with '90s nostalgia being such a trendy thing these days, it's not a strange question to ask.

Sadly, my fellow The Santa Clause devotees, I don't come bringing a Christmas miracle that Paige Tamada is acting again — I wish I was. Unfortunately, it looks like Tamada's acting career came to an end shortly after The Santa Clause, if her IMDb page is any indication:

Apart from some bit roles in popular shows of the time like The Fresh Prince of Bel Air and Ally McBeal, Tamada didn't end up pursuing acting all that much after her flawless performance in The Santa Clause as Judy the Elf — and it looks like she stopped all together in 1999 after portraying "Girlfriend #2" in Ally McBeal.

Though many — even Bustle ! — have wondered in the past where Tamada is now, at 29 years old, it doesn't look like she has much of a social media presence (though a thread on IMDb purports that she attended UC Berkeley and majored in English). Similarly, tween entertainment site J-14 published a recent (though undated) photo claiming to be of Tamada earlier this month, but like the IMDb thread, it's unconfirmed.

Since we don't know for sure where Tamada ended up after quitting acting, though, it does leave some room for speculation — like the really great theory that she, like Judy, headed off to the North Pole to live life as an adorable elf! I, for one, choose to believe that.

(But seriously, Paige, if you see this, I am dying to know about life as an elf. Drop me a line!)