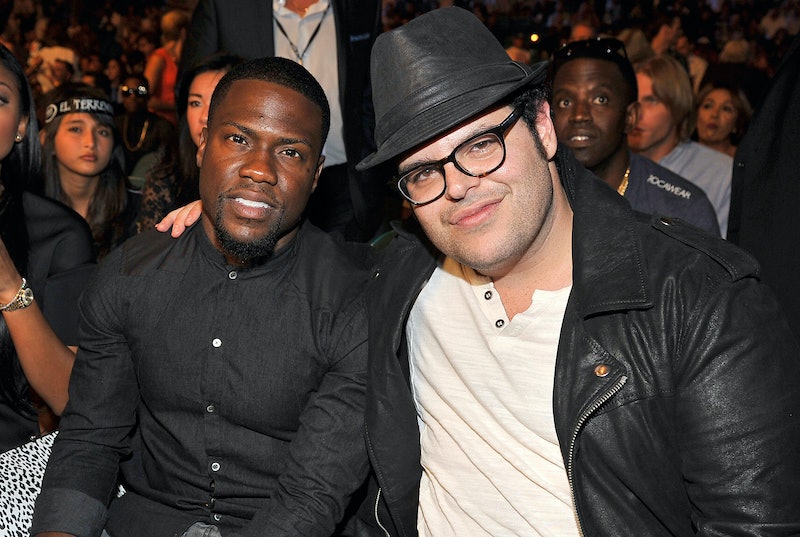 In a classic example of life imitating art, The Wedding Ringer co-stars Kevin Hart and Josh Gad crashed a wedding. Nope, this crazy stunt had nothing do them filming a sequel. After learning that a wedding was taking place next door to their photo shoot, the actors, who both happened to be wearing tuxedos, temporarily ditched work and interrupted the reception of a couple named Rajan and Chandni. Hart immediately took the mic and delivered an off-beat speech, followed by an original song from Gad that was um, probably riskier than anything you'd find Olaf singing on Broadway.

The entire scenario played out like a hilarious combination of a stand-up comedy routine, an American Idol audition, and an energetic dance-off all rolled into one. Even though the trend of celebrities crashing weddings isn't exactly a new thing, and The Wedding Ringer also lacks originality, Hart and Gad's impromptu move still sounds like a pretty easy and fun way to get promo for their film.

The film is scheduled to be released on January 16, so I wonder if they'll try to squeeze a few more crashes within the next few weeks? In fact, they should totally consider skipping the traditional press run to go on a nationwide crash-a-wedding spree. Right now, there are probably plenty of willing couples prepared to treat Hart and Gad like the Santa Clauses of weddings, clearing a walkway and setting out cordless microphones at their venues in place of milk and freshly-baked cookies. Honestly, having a celebrity show up unannounced at a wedding doesn't sound like the worst thing that could happen on a couple's big day.

In reality, both Gad and Hart are probably way too busy to pull this off. Hart has his own wedding to plan and he's been announced as Saturday Night Live's first host of 2015. Meanwhile, Gad may be booked for Frozen 2 (fingers crossed).

Watch Hart and Gad crash the wedding below: