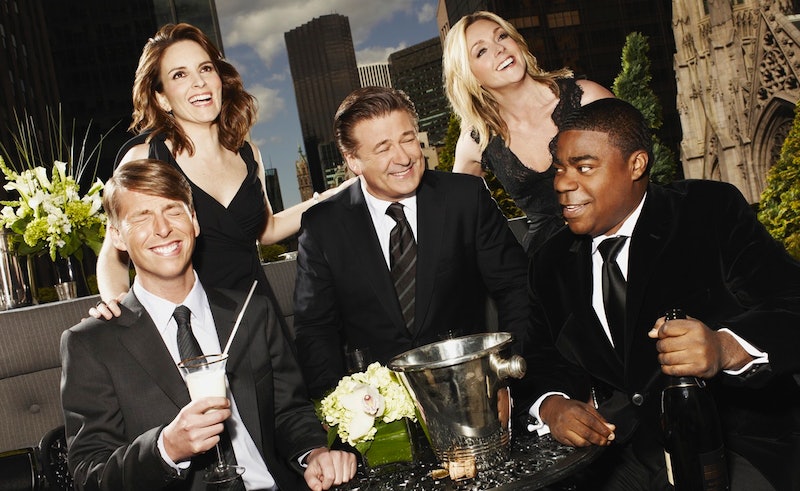 Oh, Liz Lemon, how my life hasn't been the same since you left. When it comes to the holidays, you might start thinking about friends — and by friends, I mean TV characters — that you don't have with you anymore. 30 Rock happens to have many of those characters you're probably missing during the holiday season. Whether it is Liz Lemon or Jack Donaghy's repartee — two of arguably the best characters to ever be on television — or Kenneth's Christmas spirit, or Jenna's awfulness, 30 Rock 's characters provided some of the best quotes, especially during the holiday season.

So in between sipping on spiked eggnog, and spreading good Merlinpeen cheer, why not revisit some of those hilarious 30 Rock quotes that will only make you merrier, cheerier, and brighter (whatever that actually means). Just because the show left our lives almost two years ago (thanks to Netflix, it feels like no time at all), doesn't mean we can't pretend like we're as naive as Kenneth and read the quotes as if it is the first time we've ever heard them.

Here are 11 quotes from all of 30 Rock's holiday episodes that are sure to get you in the Christmas spirit.

The time Tracy summed up the holidays

"The holidays without drinkin' is rough."

When Liz Lemon spoke the truth about the ideal gift

"Well, he keeps telling me that he wants skinny jeans. So Cheese of the Month Club."

Pete's way on calling out the non-donators

"I should make up new cards that say 'Happy Holidays from Everyone Except Jenna.' But that would require me to have some remaining life force."

Kenneth's (not so) easy way to do Secret Santa

"The person with the highest number gives the smallest gift to the tallest person. If they want to switch, they cannot. Unless they do. Then everyone puts their head down, except the murderer. Oh, wait, that's not right."

"And a bowl of meat cubes with picture of Jimmy Connors sticking out, in the tradition of Verdukianism."

When Liz Lemon compared creativity to a bird

"You want to exchange creative gifts? Oh, well. You are the one that's in trouble now, buddy. Because creativity, to me, is just like... like a bird. Like a friendly bird that embraces all... ideas. Just, like, shoots out of its eyes all kinds of beauty."

The time Liz explained why you should travel on Christmas Day

"I swoop in the next day for presents and pie."

When Jack and Avery went non-PC for their holiday card

Avery's perfect gift for your mother-in-law

"Merry Christmas, Mrs. Donaghy. My gift to you is the feeling of superiority you'll have for the next two seconds."

When Jack summed up your entire holiday experience at home

"I know exactly how your holidays were. You took the train to your parents' house. On Christmas Eve, you forgot that eggnog has alcohol in it, and got into a shoving match with your aunt about who puts the star on top of the tree."

More like this
How To Dress Up As A ‘Squid Game’ Character For Halloween
By Emma Carey
A TikToker Just Proved Gossip Girl's Identity Was Revealed In Episode 1
By Jake Viswanath and Meguire Hennes
14 Last-Minute Halloween Costumes That Only Require A Flannel Shirt
By Kirsten Nunez
64 Genius Gift Ideas For Every Single Guy In Your Life
By Teresa Newsome, Mia Mercado and Brittany Leitner
Get Even More From Bustle — Sign Up For The Newsletter