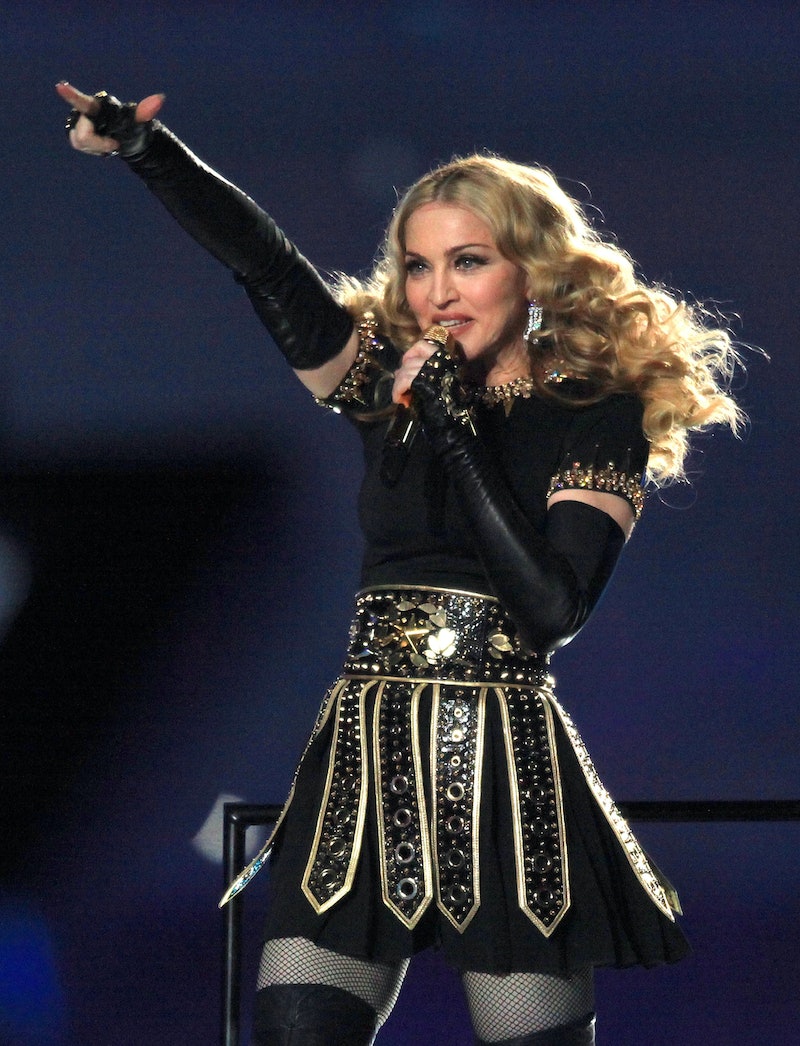 Last Friday, without warning, Madonna decided to premiere six songs from her new album, Rebel Heart, on iTunes: "Living for Love," "Unapologetic Bitch," "Ghosttown," "Devil Pray," "Illuminati," and "Bitch I'm Madonna." I was so excited, I thought my heart my explode through my chest. According to Billboard, Madonna wasn't planning on debuting any new material from her upcoming 13th studio album until February, but a series of unfortunate demo leaks prompted the now 56-year-old pop music icon to give fans an early preview of the project. Thankfully, the response so far has been overwhelmingly positive! Madonna collaborated with many different musicians on Rebel Heart, but these six finished songs all have one very important thing in common: Madonna sounds like she actually cares about the music she's making again — and that's so awesome.

Let's face it: Madge sounded beyond bored singing songs like "Girls Gone Wild," "Superstar," and "Turn Up the Radio" on her last LP, 2012's MDNA. It was as if she didn't care anymore. She didn't seem to be having any fun. To the contrary, she sounds like she's having an absolute blast on new Rebel Heart tracks like "Living for Love" and "Bitch I'm Madonna." What a difference a couple of years can make!

Here's how celebrities are reacting to Madonna's new album:

Madonna responded to Ariana Grande's tweet, and she was so overcome with emotion, she could only answer with emojis:

When Madonna featured Frankie Grande's recreation of the Rebel Heart cover shoot (above) on her Twitter, he flipped out:

Unfortunately, another new set of Rebel Heart demos made their way online on Tuesday. Sigh. Why does this keep happening? My fingers are crossed that the quality of Madonna's finished material will be able to keep Rebel Heart afloat in the face of these frustrating leaks.

You can pre-order Rebel Heart (due out on March 10) on iTunes now.

More like this
Britney Spears Shares Unknown Details Of Conservatorship In New Voice Notes
By El Hunt
Twitter Is Freaking Out Over Rihanna’s 2023 Super Bowl Halftime Show Announcement
By Stephanie Topacio Long
Everything To Know About Taylor Swift’s 10th Studio Album, 'Midnights'
By Grace Wehniainen and Jake Viswanath
What Demi Lovato Really Thinks About Child Stardom, Depression, & Sobriety
By Radhika Menon
Get Even More From Bustle — Sign Up For The Newsletter