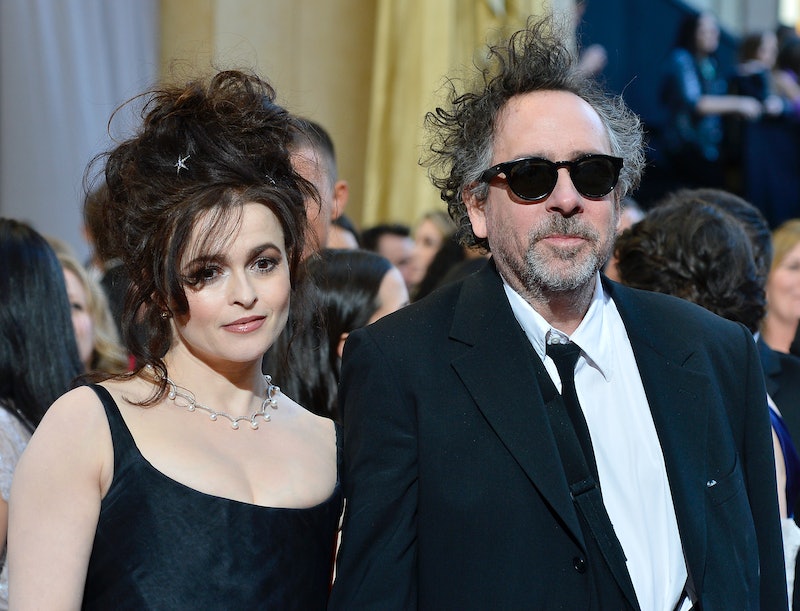 Well, it's been confirmed this Tuesday, December 23: love, in all its weird and wonderful permutations, is officially dead in the ground with the split announcement from the King and Queen of Macabre, Tim Burton and Helena Bonham Carter. The talented couple with the best hair game in Hollywood announced that they were in fact officially splitting after 13 years together. Not a divorce, because they were never legally married, because of course they wouldn't believe in such symbolic societal restraints, BECAUSE THEY WERE PERFECT FOR EACH OTHER. Sigh, of course the darkest couple of all would end it on their thirteenth year.

Even though the news is heartbreaking, Burton and Bonham Carter have said that they will remain friends (somehow this makes me sadder) to co-parent their children. Why do we have to lose such wonderful, functional couples? Especially such a creative and kooky pair like Burton and Bonham Carter, whose combined artistry and talent gave us so many deliciously surreal moments in film. Bonham Carter was (ah this past tense kills me) Burton's inspiration and often the most electric elements of his movies. She could make watching grass grow interesting! But a frantic look at Bonham Carter's IMDb page notes that she is still on for the second installment of Alice in Wonderland, which hopefully means that even though their love is dead (sigh) the great art that Burton and Bonham Carter make together will never stop. A look at her best moments in his films:

Bonham Carter had two roles in this gorgeous, surreal epic from Burton that starred Ewan McGregor. She played both the innocent and elusive Jenny, and also an elderly witch with an eyepatch that offers premonitions to Bloom. The makeup for the witch took over five hours to apply. True movie magic, true love magic.

In which Bonham Carter plays the voice of the titular Corpse Bride. I like to think of this perfect animated feature as Burton's love letter to his beloved Helena, as I weep quietly to myself during the musical numbers.

Charlie and the Chocolate Factory, 2005

Of course, a reboot of any classic would cause a stir, and that definitely rang true when Tim Burton helmed a reinterpretation of Willy Wonka and the Chocolate Factory, and Bonham Carter played an unconventionally plain (looking) role as Charlie's mother, Mrs. Bucket, but she brought her wide-eyed loving sincerity to the part.

Though the response to Burton's live-action version of Alice in Wonderland has been generally mixed, there's no doubt that he nails the dark, unsettling world that Alice falls into. She's a stranger in a strange land of characters, one of the best being Bonham Carter's pompous and explosive little red queen with an enormous, digitally enhanced noggin. The perfect combination of hilarious and evil and Burton.

Even though not every Burton film is a hit, like Dark Shadows, just the visual splendor of his dark, strange worlds is worth a watch. Bonham Carter played Dr. Julia Hoffman in Burton's remake of this gothic soap opera. It was bombastic and dark and strange and all about escaping reality through fantasy, which is just a testament to both Burton and Bonham Carter's greatness. Look how fabulous Dr. Hoffman is with her fiery red hair and too often, a little drunk, but still so charming.

If they are going to stay friends for the kids, hopefully that means the kids among their fans too, who live for the surreal, dark and often uplifting strangeness that only Burton and Bonham Carter have been able to give us. Now excuse me while I cry my way through their whole oeuvre.