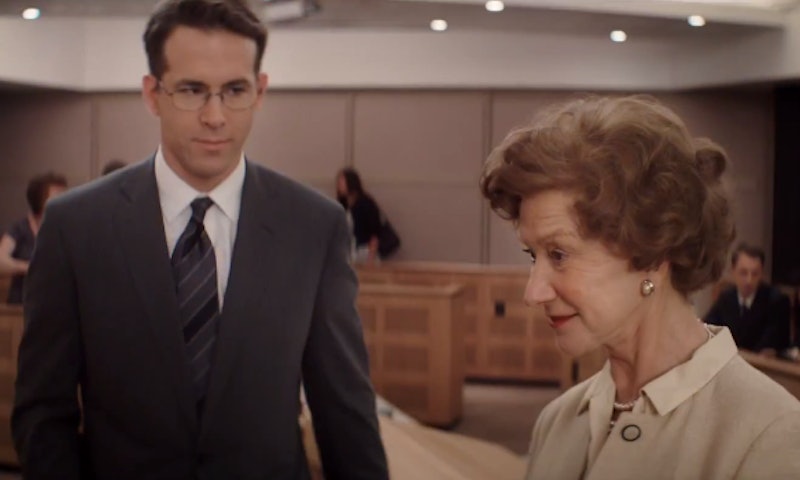 Green Lantern may have brought him down, but Ryan Reynolds deserves a chance to get back up again. He might take that chance in Women In Gold, in which Reynolds co-stars with awesome women Helen Mirren and Tatiana Maslany — though one of them will be existing in a different era than his character.

Must like the Judi Dench-starrer Philomena — which also followed a true story about a woman taking her past into her hands in her present — Woman In Gold will likely mix the uplifting with the super depressing. Mirren's Maria Altman is taking charge of her own history, after all, and she's making some cheery quips along the way. But Altman is also a Jewish woman who fled from Nazi-run Austria.

Altman's older self will be played by Mirren, her younger self by Orphan Black star Maslany. From the trailer this seems like the kind of movie that would be perfect to go see with your mom, which makes it kind of a bummer that it won't be out in time for this year's holidays. But it will likely still be in theaters by Mother's Day, as it comes out April 3, 2015. Also present in the cast: Katie Holmes and Game Of Thrones star Charles Dance.

Altman's story's pretty interesting, actually; you can read more about it in her New York Times obit. A taste:

“I’m a person of great perseverance,” Ms. Altmann told The New York Times in 2006, when the Klimts arrived in Los Angeles for an exhibition at the Los Angeles County Museum of Art. Nevertheless, she added, “I could not imagine that these paintings would ever really come my way in a peaceful solution.”