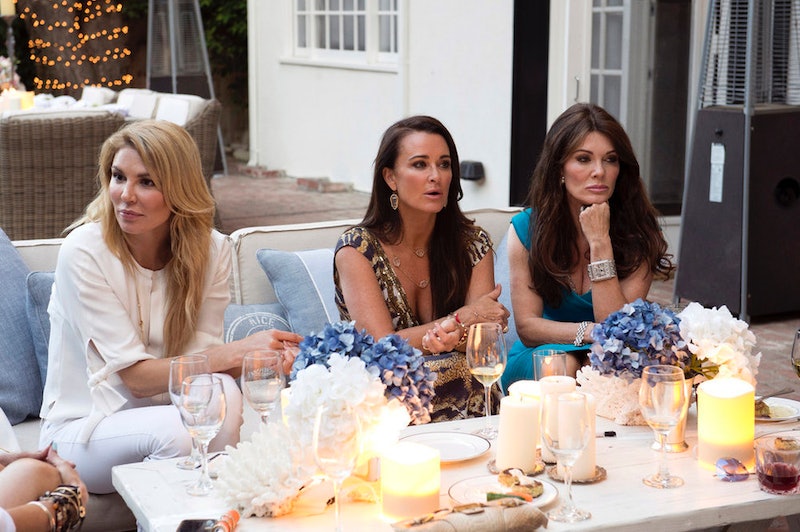 When will reality TV stars realize that nothing good ever comes from meddling in the feud between two friends? Well, it doesn't look like they're going to learn any time soon. That statement is most certainly backed up by how The Real Housewives of Beverly Hills ' Kyle Richards played peacemaker when she invited recently sworn enemies Lisa Vanderpump and Brandi Glanville over to Camp David, I mean, her house for a good-old-fashioned Beverly Hills-style barbecue.

You see, things are still not great between Lisa and Brandi, former besties who now can barely be in the same room together. Kyle, bless her still jet-lagged heart, invited both of her friends over because, well, they are both friends of hers. She figured she would just have them both over to enjoy the fanciest barbecue on Earth, and if they kill each other, at least it provided a show with dinner, right?

Both Lisa and Brandi did in fact show up to Kyle's shindig. Unfortunately, there were no major blow-ups at this party. And might I just take this moment to ask where have all the fights been this season? We're six episodes into Season 5, and all we've had so far are some shady comments in the Housewives' individual interviews and some passive aggressive comments here and there. Where has all the drama gone?

Luckily, these two ladies are always a hoot whether they're angry of fun and fancy free, so when they were reunited, there was some underlying tension you could cut with Lisa's new stripper-height heels. Brandi kept going on and on and on about her upcoming housewarming party, basically begging for Lisa to RSVP. Man, she must really need to get a head count for this event or something. Those hors d'oeuvres must be something else.

Meanwhile, Lisa was not having any of it. She avoided Brandi's questioning and even almost got into an argument with Yolanda Foster of all people. Yolanda was offended that Lisa didn't invite her to her ceremony where she received her spot on the Palm Springs Walk of Stars. When you've made Yo angry, that's when you know you've really messed up.

There were also some backhanded comments between Lisa and Brandi about who made who cry in Puerto Rico at the end of the party. You know that made both of them say to themselves, "I can't believe she said that!"

Clearly, Lisa did not want to be at Kyle's barbecue. I don't even know why she went. Oh yeah. She's on a reality show.

So we didn't get the heated argument between Lisa and Brandi that we were hoping for, but we did get an icy exchange that signals an even more epic showdown to come. Until we meet again at Brandi's housewarming party. Hopefully.

More like this
Kathy Hilton’s 'RHOBH' Controversy Wasn’t Entirely Caught On Camera
By Jake Viswanath
Kathy Hilton May Not Return To 'RHOBH' — At Least Not Full Time
By Jake Viswanath
Teresa Giudice Flipped A Table — Again —  On The 'DWTS' Season 31 Premiere
By Jake Viswanath
Clayton & Susie Broke Up, Citing "A Significant Amount Of Pain" After 'The Bachelor'
By Jordyn Tilchen
Get Even More From Bustle — Sign Up For The Newsletter