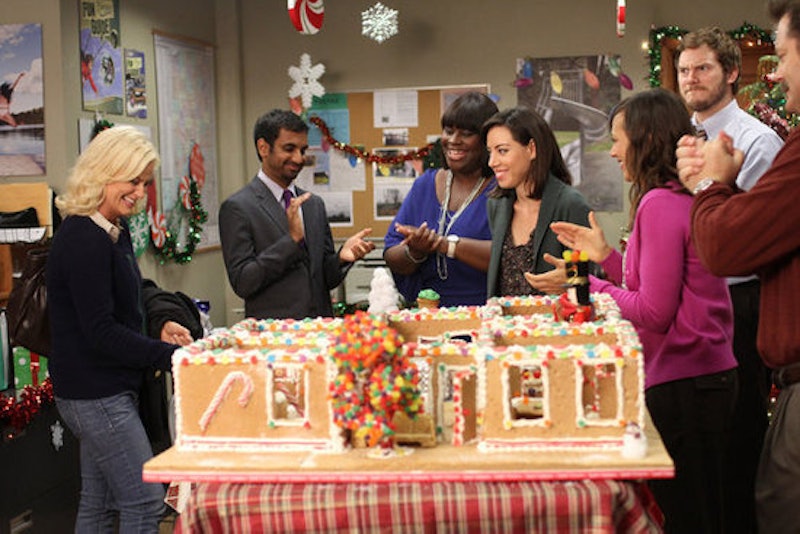 Oh, Christmas time. How fun it is for about five minutes until you realize you're going to need a lot of spiked eggnog to get through answering the "So what are your plans for the future?" question from your distant relatives. Realistically, Christmas is a great holiday to hunker down in a really fluffy blanket, within earshot of a television or your computer, and watch some really good Christmas TV episodes on Netflix. Netflix doesn't insult you by getting you a "Microwave Cooking for One" cookbook, or offer to gift a month free of Match.com. Netflix would never hurt you like that, because Netflix looks out for your best interests in life.

Christmas episodes are huge for TV. Since most shows go off air around the holiday season, they usually use that final episode to squeeze in one episode of Christmas cheer. I'd even go as far to say that a few of the Christmas episodes listed below are some of the best episodes the respective TV shows have produced during their time on air. There's just something about the cheeriness that the holidays have that brings out the best in TV. Here is a list of our 12 best Christmas episodes you can watch on Netflix.

"A Benihana Christmas," The Office

What Happens: Michael and some of "the boys" go to Benihana after Michael and his girlfriend breakup. Meanwhile, Angela has a Christmas party war against Pam and Karen. Overall, it's the best Christmas episode of every Office Christmas episode. There's a karaoke machine involved, so you know it's going to get weird.

"Ron and Diane," Parks and Recreation

What Happens: Leslie and Diane attend an award ceremony that is honoring Ron's woodworking, which is ambushed by a Tammy. The rest of the office is offended when Jerry/Larry/Gary doesn't invite them to his awesome Christmas party, because Jerry/Larry/Gary has a great life.

What Happens: The loft (and friends) attempt to attend a handful of Christmas parties throughout one night. Obviously, it doesn't work out very well for them all, but at least they give it the old Christmas try.

What Happens: The writers prank Kenneth into believing a bizarre made-up religion called Verdukianism to avoid partaking in his complicated Secret Santa. Liz and Jack have a competition to see who can give the best gift, while Jack reconnects with an old high school flame (Julianne Moore).

What Happens: This episode is all about forgiveness. After Richard is sent to the hospital, Rory, Lorelai, Emily, and Luke are all confronted with the chance to make amends with each other.

"Grandma Got Run Over By a Reindeer," Grey's Anatomy

What Happens: Religion sparks a lot of controversy at the hospital as many find they have differing faiths when situations with patients arise.

What Happens: After a speech gone wrong, Michael has to find a way to rehire the entire staff back after GOB fires everyone for roasting him at the Christmas party. Meanwhile, Buster tries to go MIA from the Army.

What Happens: The New Directions are asked to be apart of a televised Christmas special, which Artie will direct, on a local access channel. But they quickly realize there is more to Christmas than personal gain.

What Happens: Not your usual Christmas episode, since a horrifying Santa terrorizes Briarcliff with his murderous ways.

What Happens: Blair's father returns home with Roman, his lover. Blair (and her mother) are anything but pleased. Meanwhile, Serena enlists Jenny and Vanessa to help with a holiday surprise for Dan.

"A Very Sunny Christmas," It's Always Sunny in Philadelphia

What Happens: Dee and Dennis try to teach their father a lesson a la A Christmas Carol, while Mac learns that stealing presents from other children's houses was an illegal tradition only his family did growing up.

"How Lily Stole Christmas," How I Met Your Mother

What Happens: Turmoil surrounds the holidays when Lily hears a voicemail Ted left for Marshall where he calls her a "grinch."

More like this
Watch The Thrilling Teaser Trailer Of 'Shadow And Bone' Season 2
By Gretchen Smail, Jack Irvin and Sophie McEvoy
Mike Flanagan Teases 'The Midnight Club' In This Exclusive, Creepy Clip
By Grace Wehniainen
These 25 International Horror Movies On Netflix Prove Fear Is A Universal Language
By Bustle Editors
Shonda Rhimes' Net Worth Makes Her One Of The Wealthiest People In TV History
By Hugh McIntyre
Get Even More From Bustle — Sign Up For The Newsletter