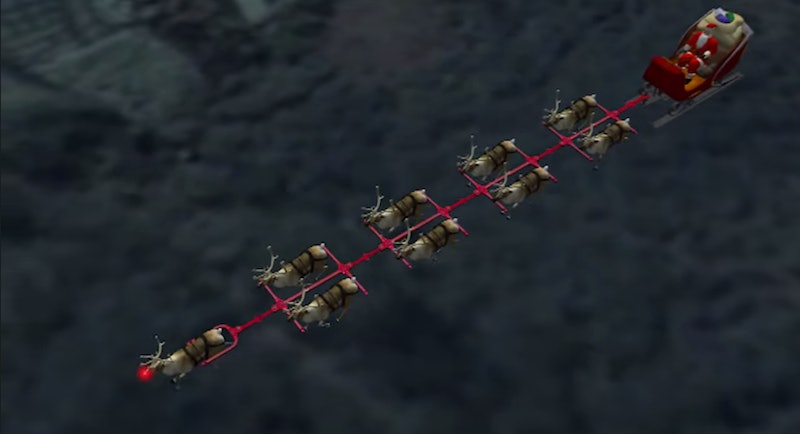 Is it just me, or does Christmas really bring out the crazy in some people? A few holiday traditions are pretty fascinating to begin with, there's a mythical guy in a red and white suit with a belly like "a bowl full of jelly" and a giant white beard who flies around in a sleigh delivering presents to all the good boys and girls around the world and lumps of coal to the bad ones. Well nothing is more insane to me than the North American Aerospace Defense Command, or NORAD's tracking of Santa Claus as he delivers gifts around the globe. NORAD even tracks Santa from his home on the North Pole. Since the idea of Santa has been around for generations, why must we feel the need to track his every fictional move? The idea seems almost too insane, or maybe just insane enough to be the plot of the next great Hollywood blockbuster. Think about it, the story has everything. A man on the run, a government entity watching his every movement, reindeer and elves as accomplices. What more could we ask for? So what would a Santa tracker-themed movie look like?

First of all, it has to be an action thriller in the vein of a Jason Bourne film or Will Smith's Enemy of the State. Remember that movie? It was the best. So the question is what could this movie be about? Who would star in it and what elements would it need to be the next popular American cinema? I have some ideas for how this potential movie could really soar at the box office one day.

Santa has been accused of committing a serious crime for which he was framed (something he's familiar with as the same thing happened to Santa in Miracle on 34th Street from the 90s). When it starts to dawn on him that there's no way he's going to be acquitted of the crime because the actual bad guys did a bang up job with the framing, the elves and reindeer tell Kris Kringle to make a run for it but still deliver presents to all the deserving children of the world. Mrs. Claus not only agrees not to say a word about where he's going, but also makes arrangements to stand in the government's way at every possible turn with the help of mall Santa's across the globe. But the government won't let a few difficulties stop them from getting their man. NORAD has set up a perfect tracking system using drones and whatever else they have in their arsenal to catch Kringle in the middle of his high-speed journey.

This year, Sony gave at least $50 million to make 22 Jump Street . Tracking Santa (tentative title) needs at least that much money, if not more. I'm thinking we're looking at an Expendables 3-style budget on this action-thriller that's sure to rake in the audiences and the profit, especially if we want to see sleigh chases in the clouds and expensive scenes of chimneys being blown up. Total Cost: $100 million

Casting Santa, The Elves and More

Billy Bob Thorton and Paul Giamatti have already played Santa Claus before, but they could definitely have more fun playing Santa as a fugitive. Or how about someone who's played a fugitive before? Harrison Ford could surely be the perfect Santa, especially if we get to see some scenes of Santa getting off his sled and running around in water dam tunnels. Or it could be fun to see a non-traditional Santa, what about a Denzel Washington or an Idris Elba? Though I don't know I'd feel if I was physically attracted to Santa Claus, a feeling that would definitely come over me if Elba was cast in the role.

And what about the elves? We'll need a few people to play the part of Santa's accomplices on his run from the law, perhaps more popular celebrities who might not be most talented in the height department. Elijah Wood, Daniel Radcliffe, Josh Hutcherson, Aziz Ansari, Seth Green, Bruno Mars (making his acting debut!), and Tom Cruise could play the head elf if the movie decides to skew older.

And of course we need a few people to voice the reindeers. Clearly after his success playing Rocket Raccoon in Guardians of the Galaxy, my first choice to play a wise-cracking Rudolph is Bradley Cooper. And then we can pepper in some other actors with memorable voices like Kevin Hart or Michael Cera if one of the reindeer was particularly hesitant and had dry humor. Look out guys, if all goes according to my plan, Tracking Santa will be out by Christmas Day 2016.