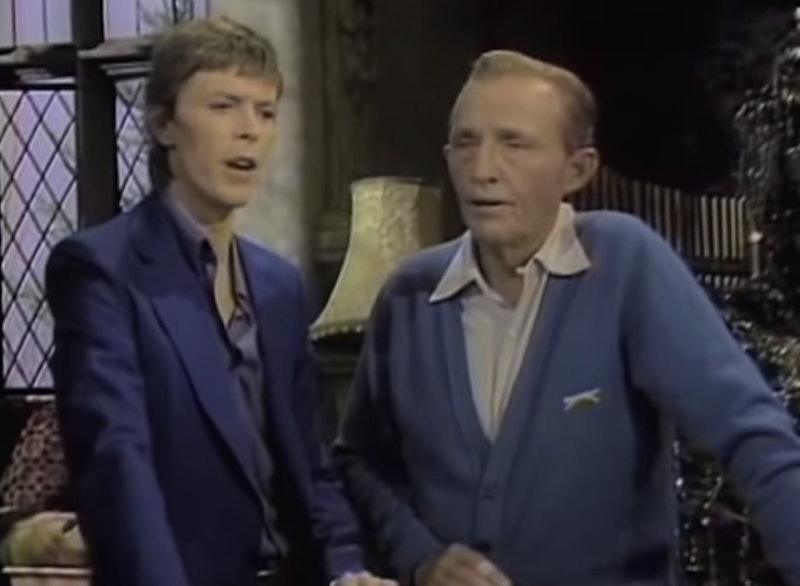 Remember that time David Bowie and Bing Crosby gathered together and sang Christmas carols together? No, it did not happen in my imagination's most secret corner, although that is a fair question. It happened in real life, and it was awesome. If I could only hear one duet of "The Little Drummer Boy/Let There Be Peace" on Earth, this is the version I'd want to hear. The video itself is total gold. I'm not saying it starts off like a low-budget porno, but I'm not not saying that either. 'Tis the season to give and receive, if you know what I mean. Aaaaaand now I've just ruined Bing Crosby for myself permanently while making David Bowie somehow even sexier, if that's possible. All of the feels. Sorry.

Bowie claims not to know who Bing Crosby is in the beginning of the video, but the feeling was not mutual—Bing knew who Bowie was and liked him quite a bit. Which, I mean, I guess is not exactly a shock? Can you imagine meeting David Bowie and not immediately being all, "Cool, I will tongue kiss you now?" While Crosby is not on record as having played tonsil-hockey with Ziggy, he raved about Bowie's performance. It will never not be hilarious to me that he liked Bowie's singing voice. I smell a man-crush and I love every second of it.

More like this
8 Things You Can Do To Appreciate Lunar New Year
By Elizabeth Tsung
Cruz Beckham Teased New Music With An Adorable Nod To Mom Victoria Beckham
By Stephanie Topacio Long
"Lavender Haze" Star Laith Ashley Breaks Down Filming With Taylor Swift
By Jake Viswanath
Twitter Wants To Dance With Anne Hathaway At Paris Fashion Week
By Alyssa Lapid
Get Even More From Bustle — Sign Up For The Newsletter
From hair trends to relationship advice, our daily newsletter has everything you need to sound like a person who’s on TikTok, even if you aren’t.