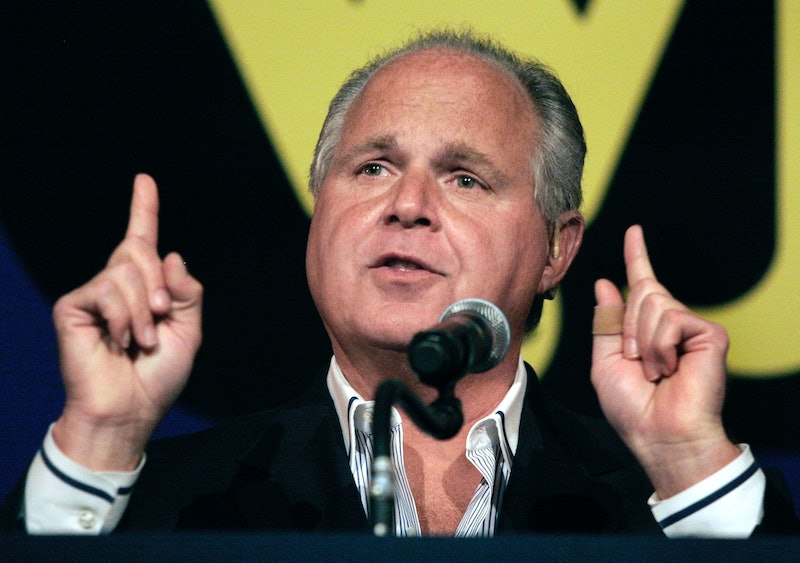 Merry Christmas Eve! As a gift, Rush Limbaugh has yet again lampooned himself by saying that Idris Elba, the British actor from Luther and from being fine as hell in general, should not be able to play the next James Bond. Why? Because he's black, of course! On Wednesday Limbaugh said that "But now [they are] suggesting that the next James Bond should be Idris Elba, a black Briton, rather than a white from Scotland. But that’s not who James Bond is and I know it’s racist to probably point this out." Hey, it's a Christmas miracle: Limbaugh called himself out as racist before we even had to!

His argument was built on the very sound principles that Ian Fleming, the author of the 007 series, specifically wrote a white, Scottish character for the lead of Bond. Which, of course, is a flimsy, crap argument for white people to hold the role forever, and if Limbaugh is going to claim that Elba shouldn't be the next Bond for authenticity's sake, he's gotta do a little more research. He said on his show: "James Bond is a total concept put together by Ian Fleming. He was white and Scottish. Period. That is who James Bond is, was." Yeah, PERIOD! Never mind the fact that of the previous actors that played Bond, Sean Connery was the only one of Scottish descent—and Fleming only Scott-ified his literary hero after Connery's Bond was a runaway success.

It's been quite the common theme this holiday season for hubbub about traditionally white characters being cast as black. The Annie reboot starring Quvenzhané Wallis just hit theatres, and lest we not forgot the racist ugliness that erupted on Twitter in March when her role was announced. "Really, black Annie?!" "Why not do a movie of a [White] Martin Luther King...it too would be stupid!!!" Shouted the scholars of Twitter.

And Limbaugh was here on Wednesday to repeat those sound arguments, offering these potent hypotheticals: " [He] went on to compare the casting to the idea of George Clooney and Kate Hudson starring as Barack and Michelle Obama in a presidential biopic. He also said Hollywood might as well cast Kelsey Grammer as Nelson Mandela the next time a film was made about the South African freedom fighter." One thing that is clear is that ol' Rushie hasn't been to the movies in a while if he thinks Kelsey Grammer is a relevant name to drop. But beyond that, the sheer ignorance of conflating casting white people as real, historical figures and casting Idris Elba as a character from a book and a franchise which are open for artistic interpretation... it's almost funny.

Why the insistence that Hollywood remained whitewashed? There has been recent outrage about the almost cocky whitewashing of Ridley Scott's Exodus: Gods and Kings, which included this thoughtful message from director Scott—if you don't like the whitewashing of the film, "Get a life!"

Yeah people of color, GET A LIFE! Oh, what's that? You already have one? And all you want is representation of your identity to become more present in Hollywood? And for white people to stop insisting that your identity as people of color be erased from the silver screen? Seriously, that's asking too much. Get a life.

But the worst part about Rush Lame-baugh's outrage over the idea of Idris Elba playing the first black James Bond (a role which it seems he was destined to play) is that he is not alone in his ignorance. A lot of people won't be happy about a black Bond, the way they were unhappy about a black Annie, the way they inevitably be unhappy when other "traditionally white" characters are recast as people of color. To y'all I say: GET A LIFE, if the presence of non-white faces on your screens makes you uncomfortable.

More like this
Pro Footballer Zander Murray Is "Blown Away" By Support After Coming Out
By Sam Ramsden
Paul Mescal, Man Of Mystery
By Samantha Leach and Heather Hazzan
12 ’90s Movie References You Missed In 'Do Revenge'
By Radhika Menon
What’s New On Netflix: Ana De Armas’ 'Blonde' & A Nick Kroll Special
By Arya Roshanian
Get Even More From Bustle — Sign Up For The Newsletter