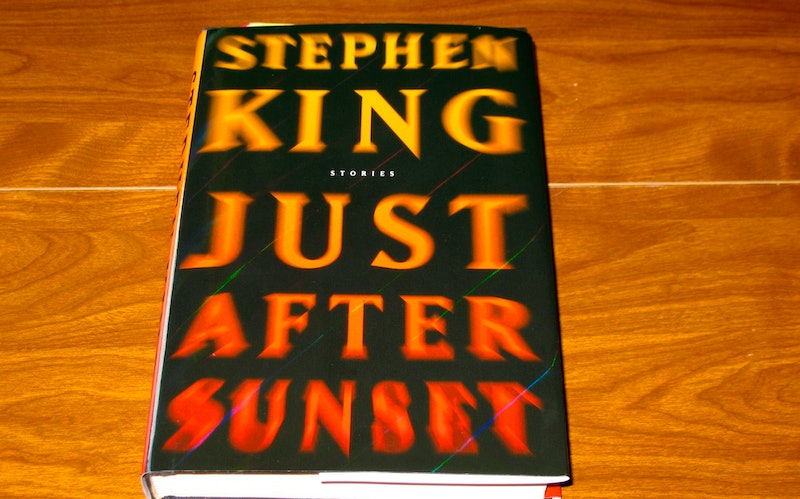 About a month ago, I had a startling realization: I'd never read a book by Stephen King. I didn't count On Writing, which I'd read a number of years ago, because that wasn't a real Stephen King book. I was talking about Carrie, and The Stand, and Under the Dome, and The Shining, those famous and beloved tomes that, over the last 30-something years, had permeated our culture and made King’s name synonymous with the Great American Novelist.

As a writer and, more importantly, the daughter of my mother, a voracious reader and longtime member of our local library board, I’ve always prided myself on my love of books. I was the kid who read Bridge to Terabithia during lunchtime, who put finishing Deenie before math homework and piano lessons. In high school, I kept the books at home — no one likes the girl who brings The Kite Runner to a party — but still, I read, every piece of “New Fiction” Barnes and Noble had to offer. Mostly, I borrowed my mother’s books, Anne Lamott and Joan Didion and John Irving; we share the same taste, and so the majority of my reading came from her recommendations, books she’d pass on to me as soon as she’d finished them.

Even now, as a permanently busy college student, I make time to read. I’m not much of a classics person — I’ll take the latest Tom Perrotta novel over Jane Austen any day — and so the books I have to read for my literature classes, Shakespeare and Homer and Thoreau, don’t give me quite the same enjoyment as the ones I read for pleasure. Still, the satisfaction of reading these older works is the same, if not more. These are the important books, the ones that millions of people have read before me. By reading them, I become part of a larger culture. And for me, a Hollywood-obsessed, city-dwelling writer, culture is everything.

Stephen King’s books, of course, are not highbrow literature. But King is one of the most well-known and frequently read authors of the century, as much a part of our culture as Orwell or Tolkien. And so I made myself a pact: I was going to read as many Stephen King books as I could, starting from the very beginning. If I was running short on time — there were other books I wanted to read this year, after all — I'd skip the worst-reviewed ones and only read the titles that'd garnered the most praise. Even still, because of King's tendency to bang out at least one book a year, it was a fairly daunting task. I wasn't deterred, though; Stephen King was one of the most famous and respected authors of all time, and I wasn't going to be the only person in the world who hadn't read at least some of his books. So I brought up the list, downloaded Carrie onto my Kindle, and got started.

I read the book in about two days, the equivalent of four 30-minute subway rides back and forth to school. When I finished, I wasn't sure how I felt; parts of it were interesting, and I could imagine how it worked well as a movie, but I didn't know if I actually liked it. It wasn't bad, I determined, but probably not something I'd read if it wasn't by an author as famous as King. Still, I was thrilled that I’d read it. Regardless of whether I’d enjoyed it or not, I could now say that I’d read a book by Stephen King.

So I went onto the next on the list, 'Salem's Lot, a 439-page doorstop of a book about a small town taken over by vampires. I'd read articles in which King had mentioned 'Salem's Lot as his favorite book of his own, and so I was excited to find out what all the fuss was about. Yet by the end of the first train ride, I found myself only a mere 6 percent through the book, utterly confused, and hesitant to continue onward. There were too many characters to keep track of, the plot was meandering, and the writing was clunky and distracted. Still, I plowed forward, certain that the rest of the book would be better — it had to be, didn't it? I read another 5 percent on the train back from school and then 10 percent more the next day. By the end of the week, I was about halfway through the book, and I had come to a conclusion: I hated 'Salem's Lot with a passion.

Everything about it bothered me, from the one-dimensional characters to the contrived dialogue to the predictability of the plot. I couldn’t understand why it was so beloved. I’ve disliked things other people have loved before, of course (No, The Princess Bride is not that funny), but usually, I’m not alone in my dissent. Yet when I Googled critiques and analyses of ‘Salem’s Lot, it became clear that the general consensus was that no one in their right mind could not love this book. It was perfect, the reviews all said. “An instant classic.” “A masterpiece of the genre.” “King’s all-time best book.” I didn’t understand the praise, when I could barely get through half the book without wanting to quit in frustration.

The problem was, I couldn't stop reading. I wanted to, badly, but I've always hated the idea of stopping books halfway, no matter how miserable I feel when reading them. With 'Salem's Lot, It wasn't about knowing the ending, as I wasn't invested enough in the characters to care whether they lived or died. It was about pride. I needed to say that I'd read 'Salem's Lot, so then I could read The Shining and The Stand and Cujo and tell people that I'd read plenty of books by Stephen King. Saying, "I've only read Carrie and half of another" was meaningless and more importantly, embarrassing. I couldn’t admit that I found ‘Salem’s Lot too difficult to get through. I’d be met with blank stares, or worse, words of disbelief. “You couldn’t read ‘Salem’s Lot?” they’d say, barely hiding their condescension. “But everyone loves Stephen King.”

I hated the thought. I didn’t want to be that person, the only one who didn’t get a piece of culture whose importance everyone else clearly understood. Stopping 'Salem's Lot and refusing to read more books by King would exclude me from the elite, well-read inner circle. But as I found myself "forgetting" to put my Kindle in my bag several times in a row over the following days, I knew I had no choice. I gave up on 'Salem's Lot, and subsequently, Stephen King.

Surprisingly, it felt pretty good. The guilt only lasted for a few minutes before I remembered that I had a mile-long "to-read" list of books I actually wanted to read that I could begin to tackle. I deleted 'Salem's Lot off my Kindle, downloaded Karen Russell's Swamplandia!, which I had always meant to get around to reading, and erased all memories of Stephen King from my mind. As I read Swamplandia!, a stunning, hugely engrossing novel, I realized what I had been missing. I cared deeply about the characters, immersing myself in their minds and needing to know their fates. This was a huge contrast to King’s book, in which I constantly had to re-read segments in order to remember whom each person was, characters whose personalities and dialogues blended together into a boring, unreadable mess. I dreaded reading each new page, my hope that the plot would improve evaporating with each chapter. Swamplandia! was only 100 fewer pages than ‘Salem’s Lot and filled with its own large share of characters, but I finished it, happily, in three days.

Still, a small part of me is always going to regret not finishing 'Salem's Lot, or at least not moving onto other books in King's bibliography. He's an author I'm supposed to love, and I know that to a whole lot of people, disliking his work is unfathomable. I truly wish that I could agree with them, but it's just not going to happen. Maybe one day I'll have a desire to find out what happened to Ben Mears and the rest of the Lot, but for now, I'm content to move on to other books on my reading list, books that will undoubtedly immerse me far more than King’s ever did. Maybe they won’t be quite as important as his books are to the culture, but they’ll be important to me. And reading books I like, I’ve discovered, is far better than reading ones I hate, even if I’m alone in the opinion. Maybe it’s a lesson grasped late, but it’s one I certainly needed to learn.