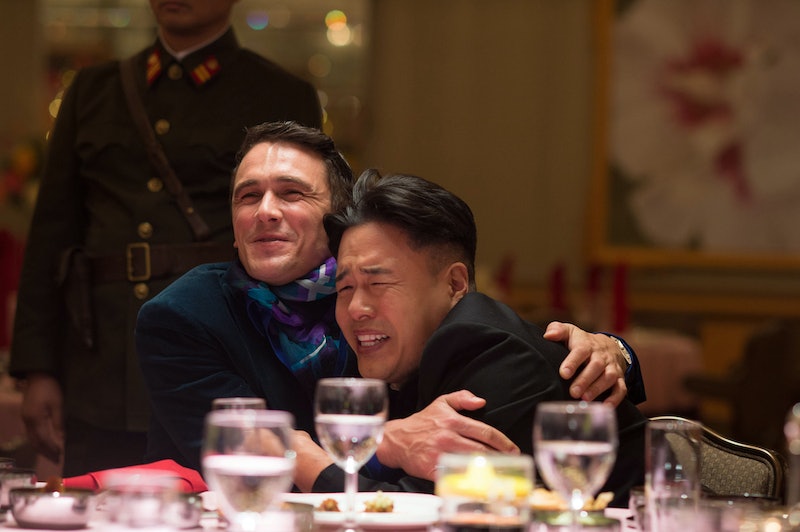 If you spend a lot of time among the Internet message boards, you’ve likely come across one particularly vexing phenomenon: the all-out castigation of a particularly movie by someone who hasn’t even seen it, which usually leads to a complete misunderstanding of the mechanisms of the picture in question. Now, calling North Korea’s preemptive antipathy for Seth Rogen and James Franco’s movie The Interview (which you can watch now!) a result of that same kind of misunderstanding might be tad off base, but you can bet they’d be surprised to find a few things upon actually watching the movie: namely, a somewhat sympathetic portrait of the nation’s leader, Kim Jong-un.

Don’t get me wrong — this is not a pro-Kim Jong-un movie, obviously. But it could very well be the most compassionate portrait of the tyrannical dictator that the Western world ever produces. Again, the characterization probably would not measure up to the standards of the actual Kim’s regime (which illustrates its Supreme Leader as an infallible deity not bound by human constraints), but it’ll at least prove humorously befuddling to the average American viewer.

We gain intimate access to Kim Jong-un via one Dave Skylark (James Franco), a schlocky talk show host with a proclivity for tabloid gossip and weightless programming, but one who fancies himself as a “real journalist” — largely to the chagrin of his friend and producer Aaron Rapaport (Seth Rogen), who strives feebly for greater integrity. Kim, a fan of Skylark’s feel-good program, agrees to a live television interview with the American celebrity, inviting him to his Pyongyang manor and striking up a personal rapport with Skylark during his stay.

It’s about a third of the way into the film when we first meet Kim, played terrifically by Randall Park (whom Veep fans will recognize as Julia Louis-Dreyfus’ perpetual rival, Governor Danny Chung). By this point, we’ve had the state of North Korea’s domestic affairs, the country’s bewildering misconceptions about Kim Jong-un, and the CIA’s plot to assassinate him all lain out for us; that’s quite a substantial bill for the character to fit. But immediately upon gaining introduction to Kim, our preconceptions are dashed.

This isn’t Adolph Hitler in Inglourious Basterds — a shadow-draped monster oozing evil from every pore. This isn’t Adenoid Hynkel from The Great Dictator — a mathematically malicious goon with a penchant for satirically effeminate private dance segments. And this isn’t even Kim Jong-il from Team America: World Police — a squawking gremlin drenched in traits begging for ridicule, racial stereotype included. The Interview’s Kim Jong-un is, uniquely, a human being.

His salutations to Skylark are wholly amicable. They spend a day together. They converse, they joke, they play, they bond. While Aaron and CIA Agent Lacey (Lizzy Caplan) highlight early on that Kim is a master manipulator, only warming up to Skylark to eschew the possibility of international relations going haywire, we do see genuine humanity in the character.

We see pain. We see vulnerability. We see a man aching to live up to his father’s legacy and expectations, but anchored down by the consumptive knowledge that such heights — much like the legions of false beliefs that Kim’s people have about him — are pure fantasy. He is expected to be a god, but he never will be. This doesn’t necessarily enrage Kim Jong-un as much as it saddens him.

Eaten alive by occupational insecurities, a masculinity complex, and no dearth of daddy issues, Kim doesn’t come off as the monster we might have anticipated. He’s almost a victim of circumstance. A poor, sad little kid thrust into a life he couldn’t conceivably know how to handle. And if that’s not enough to earn the scamp a place in our hearts, he loves margaritas and Katy Perry’s “Firework.” Now how can we possibly hate a character like that?

Again, The Interview isn’t a “pro-Kim Jong-un movie.” You won’t likely find such a thing coming out of any major American studio. But what’s surprising, and a little bit impressive, about the film is its willingness to avoid stooping to the usual routine, especially when dealing with real life villains to the United States: absolute demonization. We don’t get that at all with Kim. We don’t exactly end on good terms with the character, but we feel a lot more for him than we ever expected to.