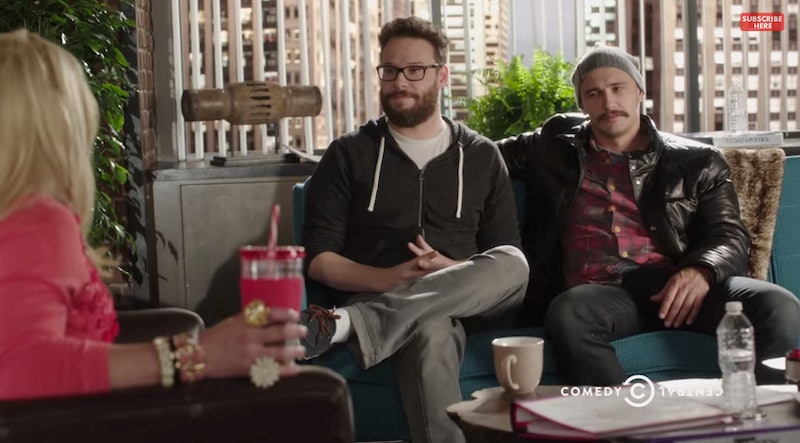 Seth Rogen and James Franco being interviewed for their now-released, much discussed film The Interview by comedian Nick Kroll in character as Liz from "PubLIZity" is probably funnier than the movie itself. If you aren't yet familiar with Nick Kroll, aka Amy Poehler's boyfriend (I mean, not to objectify him by reducing him to one half of a couple, but I can't stop mentioning their couple status because OMG best, funniest couple ever), you should be. You might recognize him as Ruxin from the FX hit The League. This is a show so funny that I watch it even though I do not understand, follow, or care about football. It's basically if It's Always Sunny In Philadelphia was about a bunch of dudes playing fantasy football. (So I guess... not like Sunny really that much at all? Moving on.) If that's not ringing a bell, perhaps you've seen his brilliant snort-worthy show on Comedy Central, The Kroll Show.

On his amazing show, Kroll and guests perform sketches, usually anchored by one of Kroll's hilarious characters. One of Kroll's funniest recurring sketches is a faux reality show called "PubLizity". Nick and comedian Jenny Slate star as two vapid publicists (both named Liz, hence the title of their faux reality show). Kroll's Liz is the "driven one" and Jenny Slate just "wants to have a life." If you've seen even just a commercial for any given reality show, these sketches will strike a chord.

Kroll recently put Liz to work, helping out to famous friends currently in a massive bind: Seth Rogen and James Franco. The most annoying thing about this whole Sony scandal is that the pulling of The Interview , a movie that is probably only kind of okay is getting a massive amount of attention. There is literally no way that they can live up to the hype at this point. Thankfully, James Franco and Seth Rogen are just self-aware enough to know that their movie's premiere has turned into something of an event, and they are milking it for all that its worth—that's where Kroll comes in with a new "PubLIZity" sketch.

Things take a strange turn almost immediately, with Kroll as Liz propositioning Rogen and managing Franco's hurt feelings. I love the idea that James Franco would be put off by a lady hitting on Rogen and not him. I maybe darkly chortled, chocking on my own spit just a smidgen. I blame the mucus build-up from the vast array of chocolates I have eaten today as I rolled around my parents' house. I have no way of guaranteeing that The Interview will be a hilarious joint. I can say that I've liked there other stuff, and that my friend Justin's watching it right now and he seems to be enjoying it. I can, however, guarantee that watching this five-minute clip will definitely get your jollies on. And after all, isn't that truly the reason for the season?

More like this
'Bachelorette' Vet Clare Crawley Unveiled 2 Special Wedding Day Accessories
By Stephanie Topacio Long
'Bling Empire: New York' Star Nam Laks Is The “Blair Waldorf Of Thailand”
By Alyssa Lapid
Paris Hilton & Carter Reum’s Relationship Timeline Includes A Surprise Baby Boy
By Bustle Editors
We Finally Have Some Answers To How Heather Gay Got A Black Eye On 'RHOSLC'
By Samantha Rollins
Get Even More From Bustle — Sign Up For The Newsletter
From hair trends to relationship advice, our daily newsletter has everything you need to sound like a person who’s on TikTok, even if you aren’t.