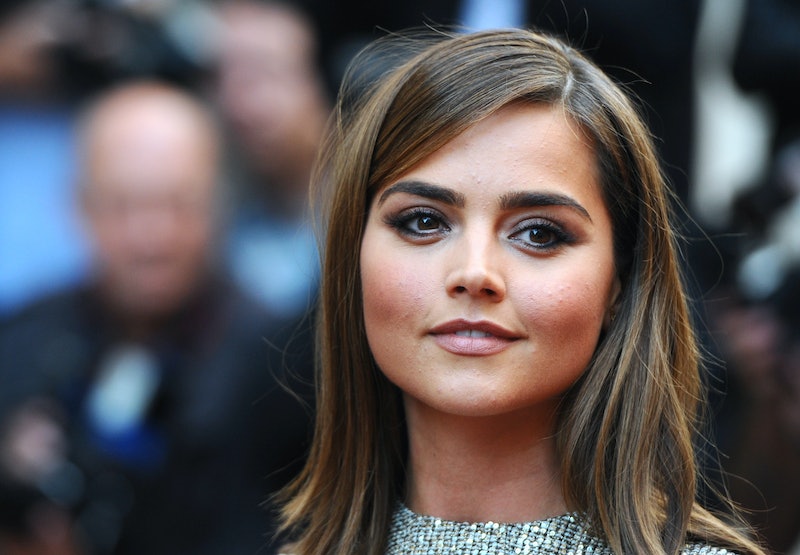 Whovians rejoice! The best news ever has just arrived wrapped with a perfect Tardis-themed Christmas bow. Jenna Coleman will officially return as Clara Oswald On Doctor Who Season 9. The newest Christmas special for the classic sci-fi series, entitled "Last Christmas," marks the first time Santa Claus has appeared on the show (played by Nick Frost), and airs Christmas night on BBC America. But the news that Clara decides to stay onboard the Tardis with the 12th Doctor broke after the episode aired in Europe hours before its North American premiere.

At a press conference for the series, the newest doctor Peter Capaldi expressed his joy for the official return of his co-star while the show's head writer and main man in charge Steven Moffat explained that despite being known as the man with all the secrets, even he was outplayed by Coleman who provided Moffat with "a certain amount of to-ing and fro-ing." Apparently Coleman told Moffat she wouldn't tell him if she was staying or going because it was, and I quote, "more exciting." Well that seems to prove their showrunner/actor relationship is better than most and that Coleman's place on the show was never an uncertainty for anyone but the actress herself. This move to stay by Clara (and Coleman) is definitely one of her best moments of the series, but there are many more moments that made her such a beloved character. (Minor spoiler alert for those who don't watch the series on a regular basis!)

Every single alter-ego of Clara has had a perfect amount of sass and heart, making Clara one of the most enjoyable companions with some of the best lines of the series. Clara's sassiness is something she shares with Amy Pond, and it helped soften the blow of losing Amy and gaining Clara as the Doctor's next companion. Just take a look at Clara's competition with the TARDIS as evidenced by this Doctor Who mini episode.

Her Confrontations With The Doctor

Clara is unique as she is able to realize the humanity of the Doctor as well as be annoyed and angered by his lack of humanity at times. She confronts the Doctor rather quickly into their friendship and proves that a companion who can challenge the Doctor is the best for him.

Her Flirty Tension Will Eleven

Which provided some of the most lighthearted and funny moments of the series.

Her Ability To Always Be A Hero

Despite not having the same knowledge and intelligence as the Doctor, Clara will never stay away from doing what is right, even if that means putting herself in danger. She's insanely brave, every single alter ego of Clara, and she's as great a hero as the Doctor.