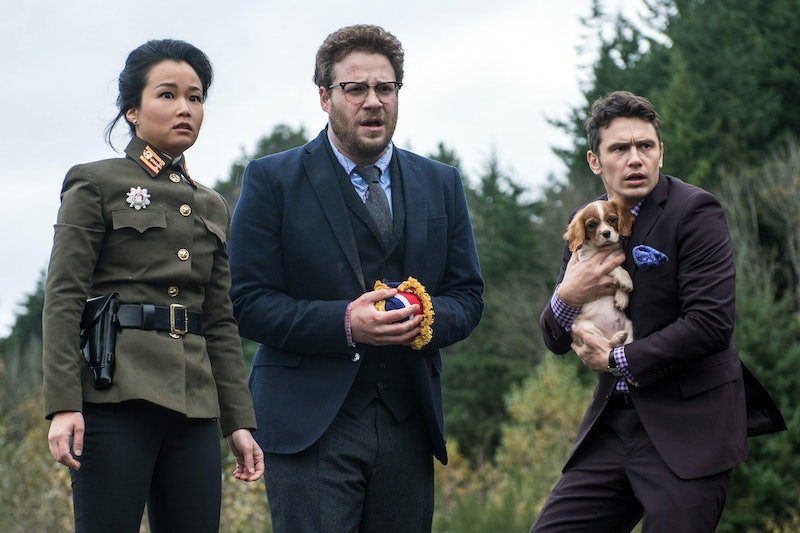 In your typical Hollywood fashion of shooting straight from zero to 60, The Interview is getting quite florid release. Just two days ago, America wasn’t sure that it would ever see this movie play in any form. Now, it’s got Internet accessibility and VOD options, plus plenty of theaters eager to show the film. What’s more, the movie is making up for its canceled premiere with ad hoc publicity events like this one: directors Seth Rogen and Evan Goldberg introducing The Interview at a California movie house, the Cinefamily.

In their adulthood hometown of Los Angeles, the native Canadians and childhood friends greeted audiences of a theater of which they claim with pride to be regular attendants, sharing a sweet-natured but expletive-laden message with the crowd. Although Rogen is known for being a spirited and amicable figure, his and Goldberg’s particularly noteworthy elation in this instance is hardly surprising.

The Interview is only the pair’s second directorial effort; you’d have to assume the bump in distribution roadblock they faced just last week might have been discouraging to the new filmmakers. But the complete 180 that has befallen their ambitious — albeit very silly — movie must be grounds for unprecedented good cheer. And what holiday would be more appropriate for that?

Although Rogen and Goldberg’s expressions of gratitude are brief, you can tell they are sincere. It as never been as clear as it is in this video that, as filmmakers, these fellows view themselves as hometown kids who love movies, love sharing them, and love making people laugh. Heck, Rogen’s nervous chuckle towards the end of his speech insinuates more apprehension about this particular audience’s enjoyment of The Interview than he ever expressed over the sociopolitical chaos surrounding it.

It says something not just about Rogen and Goldberg, but about The Interview. This doesn’t seem to have been a movie that was ever meant to rub North Korea the wrong way, to stir any pots, or to incite any changes. Sure, it has plenty to say about the state of our world, both abroad and domestically. But all in all, it’s meant to be funny. To make people happy. That seems, more than anything, to be what Rogen and Goldberg want to do with their lives. And so far — with a few tyrannical dictators proving the exception — so good.