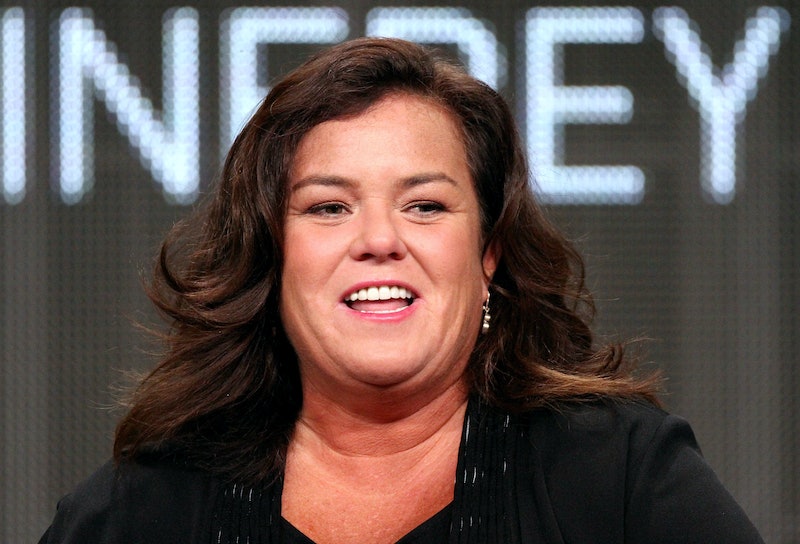 Never thought I would have such mad respect for Rosie O'Donnell, but the way she has been so aggressively outspoken in defending the victims of both Bill Cosby and Stephen Collins throughout the course of the past few weeks has been impressive. Not only because of her outpouring of support, but because of the lack of it that surrounds her. On Wednesday, O'Donnell wrote a "free-verse poem" as many news outlets are calling it on her blog addressing Collins for his disgusting abuse and misconduct, and also calling out Katie Couric for being too forgiving and generous of Collins in their interview on ABC.

The 52-year old co-host of The View has been extremely open, vulnerable and brave in sharing her own history of sexual abuse as a child, which is why it's been frustrating as an audience to see such opposition or ignorance to her and to other victims—especially from Whoopi Goldberg and her relentless defense of Bill Cosby. O'Donnell's poem on her blog that calls Collins out has some particularly sensitive and possibly triggering material about what happened to O'Donnell as a child and the lasting pain and trauma of being a victim; but perhaps the most scathing was how she held Katie Couric accountable:

i was sure she was gonna do 2 him / what she did 2 sarah plain / hit him with his truth/ right between the eyes / expose him for who he was / 'what newspapers do u read sarah?' / she saved us all then / this time / she didn't.

I hope that the form in which O'Donnell has chosen to express her criticisms won't detract from their legitimacy—Katie Couric SHOULD have been more damning of Collins, who is making so many rationalizations of his despicable behavior. It's been the year of fallen idols, as we've seen with Bill Cosby and the many, many women (nearly 30 publicly) who have come forward with their own stories of abuse and drugging at the hands of the comedian. Just this week, Roman Polanski tried to have all sexual abuse charges against him dismissed (an appeal which was denied by the Los Angeles County superior court). Which is why solidarity with victims like O'Donnell provides is so important.

She addressed not only the pain that Collins has caused but offered several resources for victims feeling the repercussions of abuse, and perhaps the most important message is in the title—you are not to blame. It's been especially disheartening to see O'Donnell and her co-host on The View, Whoopi Goldberg, engage in their form of "open forum" discourse, because Goldberg has said more than her fair share of questionable stuff defending Cosby and minimizing the experiences of victims, EVEN when model Beverly Johnson came on to talk about her own experience. So I'm thankful for O'Donnell for what seems like such a human and simple act—being compassionate and providing support—but which so many other celebrities are failing to do.