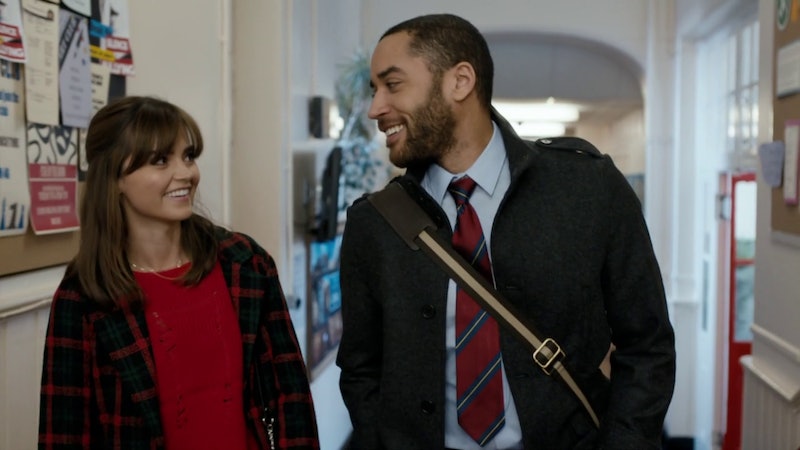 Season 8 of Doctor Who ended on such a sad note with the death of companion Clara Oswald's boyfriend, Danny Pink. But in the Christmas special, things proved to not be all that they seemed, so is Danny Pink really dead on Doctor Who ? I wasn't surprised Samuel Anderson returned for the Christmas special episode "Last Christmas" since most people who die on Doctor Who come back in some form or another — plus, his death in Season 8 was pretty surprising. But, based on "Last Christmas," it appeared Danny is officially dead and that the episode just let us see Clara and Danny getting a meaningful goodbye.

"Last Christmas" showed that Clara was dreaming that Danny was still alive and he was dressed as Santa. And not surprisingly, dream Danny was super dreamy. He was just as sweet and wonderful as real Danny was and once it was revealed he was a dream, he asked Clara to miss him for five minutes a day, but that she needs to move on with the rest of her life.

Danny dying was the only thing more surprising than Rory being a character for so long in Doctor Who (and I loved Rory! I just couldn't believe how important he became). And I think the real question is — now that it seems Danny is really dead — how much will we see Danny in the Season 9? Jenna Coleman will be returning for the next season of Doctor Who, so we finally know that Clara won't be leaving the show. So, could Danny come back in flashbacks or other time travel and alien-related shenanigans?

Showrunner Steven Moffat said that everything in "Last Christmas" was a dream except for the last scene, so I'm also wondering if the Doctor really didn't find Gallifrey like he told Clara earlier in the episode (which he said he had lied to her about finding it so that Clara and Danny could be together). We will have to wait until Season 9. But the most pressing thing I need to know is how the hell did Clara meet her potential great-grandson in Season 8?!? Could she be pregnant with Danny's baby for Season 9? Only time travel will tell (har har).

In the meantime, I will just embrace the sweet, heartfelt goodbye we got in "Last Christmas." Danny Pink, Clara — and I — will miss you.