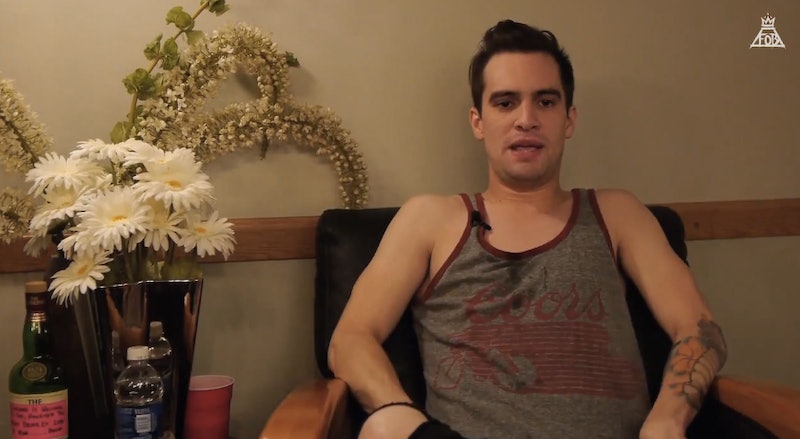 Fall Out Boy is back, and they've got a new album. Rather than proclaim their triumphant return in the usual way (a press release? TRL? What year is it again?), they put Panic! At The Disco's lead singer Brendon Urie to work doing a Drunk History- style telling of the Fall Out Boy story. Brendan knocks back an unreasonable (and, let's be honest, probably unsafe) amount of booze, and over the next few minutes, shares the story of how his friends, Fall Out Boy, came to be a band. Making this even better? FOB appear wearing all manner of wigs to reenact their history. This is the best thing I have seen all day. Admittedly, it's only halfway through the day and I have not yet put on a bra, but I still think this is awesome.

You don't have to be a fan of either band to appreciate this video, though it certainly helps. Urie goes from totally amped and pouring beer on himself, to ruminating quietly about the level of makeup Pete Wentz wears, to pausing to hurl into a garbage can. It's a rock n' roller coaster that had me tittering throughout. It's also put tracks by both bands playing in my head on repeat for several hours and I'll be real, that hasn't been the greatest.

Also, apparently Urie has a massive following on Vine (he is truly a renaissance man). While I'm not familiar with his work there, this video leaves not one iota of doubt in my mind about his viral brilliance. I want Urie to get drunk and talk about Carly Simon and James Taylor's marriage. I want to know his thoughts on the mortgage crisis. What does Brendon Urie think about vegetarianism? I would ask him to record videos dedicated to all of these subjects, but I also don't want to be responsible for his liver failure and/or death, so this clip will have to suffice. There are worse things.

More like this
Cruz Beckham Teased New Music With An Adorable Nod To Mom Victoria Beckham
By Stephanie Topacio Long
"Lavender Haze" Star Laith Ashley Breaks Down Filming With Taylor Swift
By Jake Viswanath
Twitter Wants To Dance With Anne Hathaway At Paris Fashion Week
By Alyssa Lapid
Hailee Kaleem Wright's Topsy-Turvy Path From MTV To Broadway
By Samantha Leach
Get Even More From Bustle — Sign Up For The Newsletter
From hair trends to relationship advice, our daily newsletter has everything you need to sound like a person who’s on TikTok, even if you aren’t.