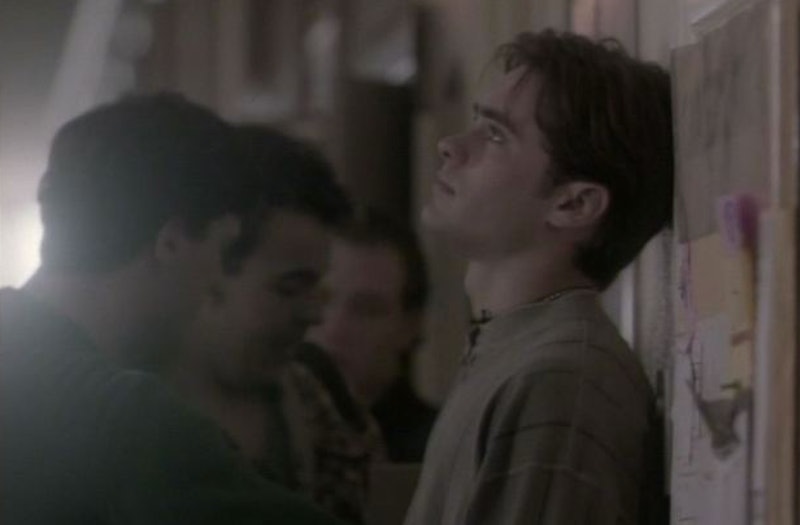 It is very important to remember, when watching or re-watching My So-Called Life, that Jordan Catalano is hardly an ideal partner for a mature relationship. What Jordan represents — to Claire Dane's Angela Chase and to the masses of young people who relate far heavily to her life and her angst — is that era in youth where actual compatibility doesn't tend to play a major role in how we choose our crushes. Jordan Catalano is all instinct, all mixed-up hormones, all floppy hair and bedroom eyes. He's not without his own poignancy, his own pathos — he can barely read! The system failed him but Angela won't! But when it comes to his relationship with Angela, it's clear that he is very much the lusty boyfriend of a certain classic youth; the kind you easily lose touch with when you leave high school and find yourself — and the kind with whom you have absolutely nothing to talk about when you meet up over Thanksgiving break for one last hookup.

So here are some of Jordan Catalano's memorable moments, both good and bad. No matter what else Jared Leto does with his life, this one character was enough to ensure he'll live forever. The world will always, always have Jordan Catalanos.

He comments that Angela's not like "those other girls," the ultimate teenage boy backhanded compliment that actually means nothing but that is so totally dreamy in the moment for some reason.

They Are Drawn to Each Other Almost Wordlessly

Words tend to only highlight the things it's really best they bury if they wanna make out.

Jordan Realizes He Has Real Feelings For Angela

Jordan Ignores Angela At a Party

And Pressures Her to Sleep With Him

He sure looks good at kissing, but it's kinda not nice to dump a girl because she won't have sex immediately, Jordan.

Jordan Vents to Angela After They Break Up

He's probably still in that band.

More like this
Who’s The Richest 'Grey’s Anatomy' Star? See The Net Worth Of Each Cast Member
By Hugh McIntyre
Dan Levy Appears In The Latest Teaser For The Weeknd's HBO Series, 'The Idol'
By Jake Viswanath
9 Movies & TV Shows That Prove Stanley Tucci Elevates Everything He’s In
By Jake Viswanath and Radhika Menon
Shonda Rhimes' Net Worth Makes Her One Of The Wealthiest People In TV History
By Hugh McIntyre
Get Even More From Bustle — Sign Up For The Newsletter