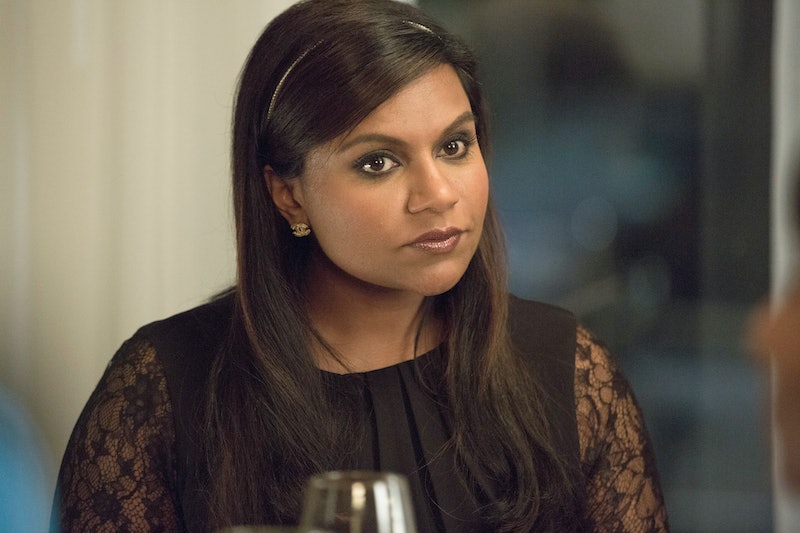 It's been quite the year for Mindy Lahiri. After years of idiot boyfriends and "just-wasn't-mean-to-be" dudes (fewer and farther between then the previously mentioned idiot boyfriends) Mindy finally got the guy of her dreams: Staten Island stallion Danny Castellano. And that wasn't the only upside of Mindy's awesome year: She also scored a coveted fellowship at Stanford University, a fellowship that she got, in part, thanks to her beloved boyfriend's selfless recommendation. (Sure, he wrote it after very nearly ruining her chances at getting the fellowship forever, but you know, it's the final thought that counts.) Though Mindy may be spending her own New Year's Eve in Palo Alto, there's no way that she's not thinking of ways to make 2015 an even more kickass year than the previous one. Sure, Mindy may not keep all of the resolutions that she declares come Jan. 1 (how many times do you think she's promised to cut down on sour straws?) but that doesn't mean that she doesn't love trying. What would The Mindy Project be without Mindy's attempts at improvement?

And while Mindy is thinking up resolutions to make her year better and brighter, I have a few suggestions for ways to improve her life that she may not have thought of:

Annette and Dot have years of wisdom that Mindy could benefit from, even if that wisdom sometimes presents itself as slut-shaming Mindy for sexting her adult boyfriend. Regardless, Annette is Danny's mother, and Mindy should totally try to get in with her for the sake of a happy mother-in-law down the road. As for Dot? Well, Dot's just the best.

Keep Danny Out of Her Schemes

What's that old saying? "Love means never having to say you're sorry... after you make your boyfriend look like a suicidal nutjob in front of his boss." Yeah, that's probably it — or it should be, in Mindy's case. It's adorable that Danny cares enough to get involved in Mindy's messes, but damn, girl, at least let the guy off the hook when it comes to his job.

Yes, Morgan is a weirdo, but he's a truly lovely weirdo. And not going to his nurse graduation ceremony was just cruel, you guys. (Note: Everyone at Schulman & Associates should make this their resolution.)

Be Better About Being On Time

Especially when it comes to things that are particularly time sensitive, like movies and comedy shows. I did it by setting my clock 15 minutes fast. Now there are times when I'm even early!

The Mindy Project is technically a workplace comedy, yet it's easy to forget due to the fact that it's also a romantic comedy. The midseason finale was one of the first times we saw Mindy make a major career move, and it was awesome to see that she's invested in something other than a relationship. (Not like we all thought she didn't have any other interests — it's just, well, nice to see once in a while.)

Keep Up the Fierceness

Keep on killin' it in the New Year, BPT.

More like this
UK Viewers Will Have To Wait To Watch The Handmaid’s Tale S5
By Maxine Harrison
Bennifer, Kravis, & 14 Other Fun Celeb Couples Halloween Costume Ideas
By Emma Carey and Brittany Leitner
10 Stranger Things-Inspired Halloween Costumes For True Fans
By Emma Carey
Megan Rapinoe's Relaxation Hack Is Super Dreamy
By Carolyn Steber
Get Even More From Bustle — Sign Up For The Newsletter